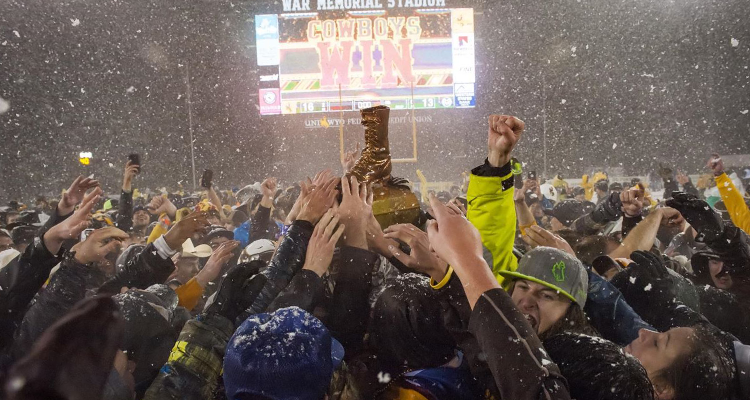 LARAMIE, Wyo. – The annual Border War game between the Wyoming Cowboys and Colorado State Rams will kick off Friday night from War Memorial Stadium in Laramie.  You can listen to the 111th edition of the Border War, Friday night on AM 1240 KASL, beginning with pre-game at 6:30 p.m. The game will also be televised nationally. Kickoff is set for 7:30 p.m.

Not only will it be the 111th meeting in the series between the two border rivals, but for the 52nd consecutive year the two teams will battle for the Bronze Boot traveling trophy.  The Wyoming Cowboys hold a 27-24 lead in the Bronze Boot portion of the series that began in 1968.  The two teams will be playing for the 74th consecutive season as the series has been played annually without interruption since the 1946 season.  The Cowboys have won 42 of the last 73 consecutive meetings, with CSU winning 31 times since 1946.  The Rams lead the overall series 58-47-5.

Seniors
Wyoming will see 15 seniors play their final game inside War Memorial Stadium on Friday evening. Those seniors have had an impressive run, playing in two bowl games and being a part of a Mountain West – Mountain Division title.

Note on Starters
The Cowboys have showed off their depth all season long. Wyoming has used 43 starters this season. That number is tied for the fifth most in the nation this season. Wyoming and BYU have the best record of those top five teams with 6-4 overall mark.

Wilson on Top of His Game
Senior linebacker Logan Wilson, who just accepted an invitation to the Senior Bowl is on the top of his game. He now has 395 career tackles after recording eight at Utah State, as he ranks fifth in MW History. He has 26 tackles over the last three contests. He also has interceptions in back-to-back games for nine in his career to rank tied for fifth in school history. He also returned an interception for a touchdown at Utah State and is tied for the active lead in the NCAA with four defensive touchdowns.

X is Rolling
Sophomore running back Xazavian Valladay rushed for 114 yards in the contest at Utah State. It marked his fourth-straight game rushing for 100 or more yards. Over this stretch, Valladay is averaging 172.7 yards per game during that stretch. He has 869 rushing yards this season for 96.6 yards per game. He ranks second in the MW in rushing this season.

Blankenbaker has Strong Showing
Sophomore nickel Keyon Blankenbaker has been on the top of his game for the Cowboy defense. He led Wyoming with nine tackles against Utah State tying a career best. For the season, Blankenbaker is third on the team with 49 tackles. He is the Pokes leader in pass breakups this season with nine.

Conway Making Difference
Senior Austin Conway was solid for the Pokes at Utah State grabbing a season-high five catches for a season-high 64 yards. He also had two rushes for 12 yards. He had four catches for 55 yards in the second half including 34 yards on back-to-back catches in the fourth quarter.

The Offensive Line is at Full Strength
The Wyoming offensive line was at full strength at Utah State. Wyoming used eight different lineman in the rotation, as Zach Watts appeared in his first game of the season along with the return of Alonzo Velazquez.

Rush Defense is Strong
The Wyoming rushing defense has been strong all season. Wyoming allows 98.3 yards rushing per game. That number is third in the MW and ninth in the nation. Wyoming allowed 105 yards on 44 carries against Utah State. It was the first 100 yard game allowed since 169 yards to New Mexico.

Colorado State enters this week with a 4-6 overall record and a 3-3 record in the Mountain West Conference.  CSU lost its most recent game at home versus Air Force by a score of 21-38.  The Rams held a 14-10 lead over the Falcons at the end of the third quarter, but Air Force out-scored CSU 28-7 in the fourth quarter for the win.

The Rams have faced four common opponents with the Wyoming Cowboys thus far this season.  CSU and Wyoming each defeated New Mexico and UNLV, while both the Rams and Cowboys have lost to San Diego State and Utah State.

Offensively, quarterback Patrick O’Brien has started the last seven games after senior Collin Hill was injured earlier in the season.  O’Brien has thrown for 2,297 yards this season, 10 touchdowns and four interceptions.  His top target has been wide receiver Warren Jackson, who has 63 catches for 940 yards and has six TD receptions.  He is averaging 117.5 receiving yards per game.  Wide receiver Dante Wright has also been very productive, catching 52 passes for 731 yards and four TDs.  CSU’s top active rusher is running back Marcus McElroy, who has 322 yards rushing on 69 carries, with three rushing touchdowns.

On defense, the Rams’ leading tackler is safety Jamal Hicks.  The senior has 94 tackles on the season, with four pass breakups.  Linebacker Dequan Jackson has recorded 73 tackles and has recovered two fumbles.  Safety Logan Stewart is third on the team in tackles, with 65, and he shares the team lead in interceptions, with cornerback Andre Neal.  They both have two picks.  The top pass rusher on the CSU team is Jan-Phillip Bombek, a senior defensive lineman from Hamburg, Germany.  Bombek has 5.0 sacks and 6.0 tackles for loss on the season to lead the Rams in both categories.

Once again, this game will be broadcast on radio over the 26 affiliate stations of the Cowboy Sports Network, including AM 1240 KASL, beginning with the pregame show at 6:30 p.m., with kickoff following at 7:30.