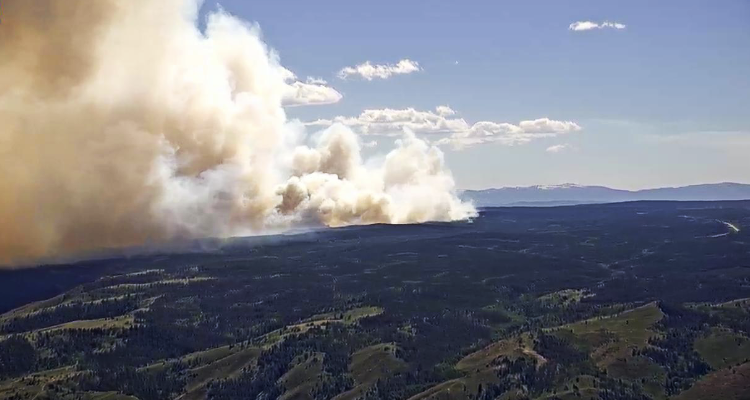 Laramie, WY.    –   The Badger Creek Fire that is burning in the Snowy Range of Medicine Bow National Forest located near the Colorado border, has now grown to an estimated 5,240 acres. The blaze first started on Sunday afternoon, June 10th. The fire saw rapid growth on Monday in southern Albany County, burning over six miles to the east from its’ original origin. Hot, dry, and windy conditions persisted throughout the afternoon, fueling the fire’s substantial growth. Monday’s fire activity prompted county officials to issue additional evacuation notices.

Evacuation orders are in place for the communities of Mountain Home, Wyocolo, Wold Tract, Foxpark, Gramm, Beehive, Miller Lake, and the areas along Highway 10 from Woods Landing south to the Colorado state line. This includes Woods Landing, New Jelm, and Jelm. Currently, there are 510 properties included in the evacuation area, with 393 homes. Pre-evacuation orders are also in place for the community of Foxborough. As a precaution, natural gas and electrical service to Woods Landing has been shut down.

At this time, there is no confirmation that any structures have been burned or destroyed.

Full suppression remains the stategy for fighting this fire, with fire crews looking to engage in locations with the highest probability of success. Crews began to establish an anchor point and construct fireline along the southwest point of the Fire. Dozers are assisting crews with fireline construction. Engines were on duty in the evacuated communities, providing fire suppression, structure protection, and assessment. Due to clear skies and lack of cloud cover, the fire activity has been increasing earlier in the morning and continues later into the night.

Additional resources continue to arrive on scene. Currently there are four Hot Shot crews and two Type 2 crews. Air resources today included two Type 1 helicopters to assist with retardant and water drops, one Type 3 helicopter for reconnaissance, and one air attack plane. There have been no firefighter injuries reported to date.

A public meeting has been scheduled for Wednesday, June 13 at 7:00 p.m., at the Albany County Fair Grounds.

The cause of the fire is still unknown at this time and the fire remains under investigation. A “tip line” has been established by the Laramie Ranger District. The public is asked to call 307-745-2392 (select option #5 and leave a detailed message) with any information they may have seen on Sunday afternoon, June 10, near Forest Service Roads 501 and 544D in the area of the Mountain Home OHV Trail system.