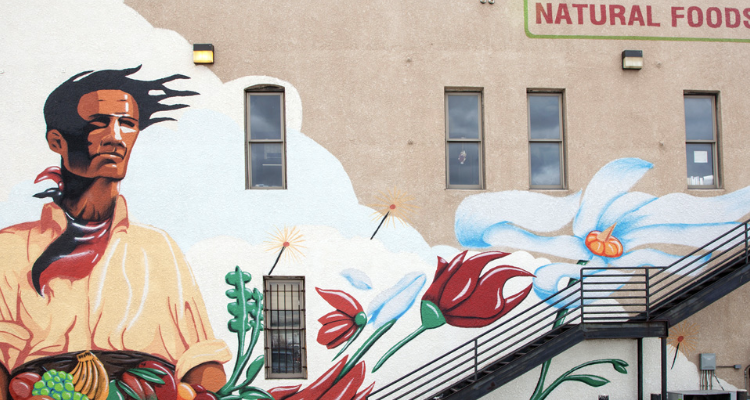 Baylie Evans, Writer | Wyoming Business Council     –     Six years ago, Mark Riddle opened his sports bar, Clear Creek Cantina, in quiet, picturesque Buffalo, Wyoming. A year later, the city staff informed Riddle they were planning a big event, and he should prepare for extra people in his downtown restaurant for a few days in August. “I was skeptical about it,” Riddle said.  Still, he ordered extra inventory and scheduled his staff for a busy week.

But he had no idea what was coming.

“That first day was just a blur,” he recalled. “The whole town was taken by surprise.” At one point, he said his restaurant was full, people were lined up outside and staff had 20 to 30 to-go orders backed up; and that was just day one of a three-day event that would become an annual occurrence: Longmire Days. Buffalo’s population swells from about 4,600 people who call it home year-round to about 10,000 people on any given day during Longmire Days. The northern Wyoming town, tucked in beside the Bighorn Mountains, is the setting for Wyoming author Craig Johnson’s fictional New York Times bestselling book series Longmire, which was made into a six-season TV show and became the highest-rated show on A&E ever before moving to Netflix. Buffalo has embraced and gladly capitalized on its role as the small western town in which Walt Longmire is sheriff. The show has a die-hard following, Riddle said, and Longmire Days – which includes all sorts of events over the three days, from book signings to actor meet-and-greets and a celebrity-judged talent show – lures fans from all over the country. “Businesses report a 300 percent increase in sales on those days,” said Jennifer McCormick, the director of membership and events for the Buffalo Area Chamber of Commerce. Hotels fill up within a few days of the date announcement for the next Longmire Days, she added, and many of the visitors say they are headed to Yellowstone or other areas of the state, as well.

And all because a Wyoming rancher wrote a book series.

From novels to art galleries, and music concerts to live theater, art does more than entertain. It is a business like any other; professional artists create a product they hope others will buy. And, as proven by places like Hollywood or the Denver Performing Arts Center, it is big business for communities. It can even provide a diversified revenue source in Wyoming’s boom-and-bust, mineral-dependent communities.

Nationally, nonprofit arts organizations generate $135 billion in economic activity each year, supporting 4.1 million jobs and generating $22.3 billion in government revenue, according to Americans for the Arts. The average arts patron spends $24.60 per event, not including meals, parking, childcare and other costs associated with attendance. Wyoming Arts Council reports the arts industry was directly responsible for creating 8,249 jobs and more than $200 million in taxable revenue in Wyoming in 2011. In 2015, the arts contributed $1 billion to Wyoming’s economy, more than the agriculture and forestry or utilities industries, and workers in Wyoming’s arts industries earned $700 million.

Even so, the arts are often seen as a ‘want’ rather than a ‘need’ in communities, and particularly so in Laramie, said Trey Sherwood, the director of Laramie Mainstreet. Lacking oil and gas revenue as well as taxes from its largest employer, the University of Wyoming, the city of Laramie has less to spend per capita on amenities than any other Wyoming community. And yet, the mayor of Laramie has been a champion for art in the city, Sherwood said. For that, she is both cheered and chastised. “If the city can barely keep a full police and fire staff, and yet the mayor is saying public art is essential, you can see why people would disagree,” Sherwood said. “There are people on both sides of the issue.” But money flows in from various sources, she explained, and arts grants can’t be used to hire policemen or fix potholes. Plus, investing in art is hugely important for long-term prosperity.

In 2010, a public art initiative that involved temporary exhibits from the University of Wyoming’s art museum “opened the community’s eyes about what was possible outside of a museum wall,” Sherwood said. Since then, 20 large-scale mural projects have been completed, encouraging many private businesses to spruce up their store fronts. Also in that time, 57 new businesses opened, creating nearly 400 jobs. Residential and commercial space downtown is nearly full, and just about every downtown business owner cites a thriving art scene as an important reason for locating downtown. The energy of downtown Laramie has been transformed, Sherwood said. Tourists are spending more time shopping and eating, potential students feel welcome and excited to attend UW, and the quality of life is improved for people of all demographics.

“Public art helps announce that Laramie is a fun, vibrant place to be,” she said. “It’s a place worth investing in.”

Downtown Rock Springs experienced a similar renaissance recently, led by the renovation of the Broadway Theater, which was supported by a Wyoming Business Council grant. Rock Springs even won the 2018 Great American Main Street Award. Chad Banks, the manager of Rock Springs Main Street/Urban Renewal Agency, said the Broadway is an anchor for the community, attracting about 10,000 people downtown each year for shows, as well as dinner, drinks and nightlife. Incentive programs have supported several public murals and sculptures, and helped business owners spruce up their facades. “Aesthetically pleasing public spaces are greatly important to our community and revitalization efforts,” said Banks in a recent Wyoming Arts Council newsletter. “No one (business owners, residents, workers, visitors) wants to spend time in a space that’s not aesthetically appealing. Making sure downtown is colorful, vibrant, exciting and clean is important to attracting folks downtown. More people means more traffic, which means more business.” Since 2006, 56 new businesses have located themselves in downtown Rock Springs, 234 buildings have been improved and 150 jobs have been added to the downtown corridor.

The Casper Art Guild and its Art 321 facility are largely credited as the driving force behind the revitalization of the Old Yellowstone District in Casper. Art 321 opened its doors in 2015 in a “seedier part of town,” said Diane Harrop, the executive director of Art 321. It was highly industrial, with a lot of train activity, vacant lots and old metal warehouses. “It was a leap of faith,” Harrop said. The Wyoming Business Council provided funding to make the district safer for pedestrians and cyclists, and helped beautify it by moving powerlines underground and adding planters, lighting and benches. Once Art 321 opened, people started streaming to the area. Today, the facility is surrounded by restaurants and shops, and accessible by safe pedestrian and bike lanes. A new state office building is being developed just to the west, as well. “We became the place to be on Art Walk evenings,” Harrop said. “People are excited about taking an old building and finding a new use for it, and keeping some of this history alive.” While art is certainly big business, it also provides countless less-quantifiable benefits to communities. Researchers have demonstrated a high concentration of arts in a community leads to higher civic engagement, better social cohesion, improved child welfare and lower poverty rates. “We help people see that there is beauty, and no threat, in a diverse set of perspectives,” Harrop said. “That can translate over to people as they work through community issues that are emotional and difficult. You can see the difference between a community that has ways of celebrating that kind of diversity of thought and those that don’t.” Additionally, Art 321 opened its doors to the public, for free, for two hours every Tuesday morning in August 2017 and 2018, with the intention of reaching out to those affected by depression, anxiety or mental-health concerns. “People come because it feels good for them to come in and be here,” Harrop said. “I don’t know how you quantify that, but it makes people feel like they live somewhere where people care what they think and how they feel.”

Even from an economic standpoint, the Wyoming Arts Council reports that a happier, creatively enriched community tends to produce a more efficient workforce, with better coping and problem-solving skills and improved longevity.

Wyoming offers many opportunities to create and consume art, no matter your taste. Check out the Cowboy Gathering of poetry and music in Encampment, or the hardcore underground Battle of Old Wyoming in Medicine Bow. Stop by the National Museum of Wildlife Art in Jackson or boo and hiss at the quirky Melodrama at Cheyenne’s Atlas Theater. Get lost in the colors, costumes and drumbeats of the Wind River Powwows, or audition for a show at the WYO Theater in Sheridan. While Wyoming may never rival Hollywood, the economic – not to mention, the social and mental-health – benefits of art are clear.