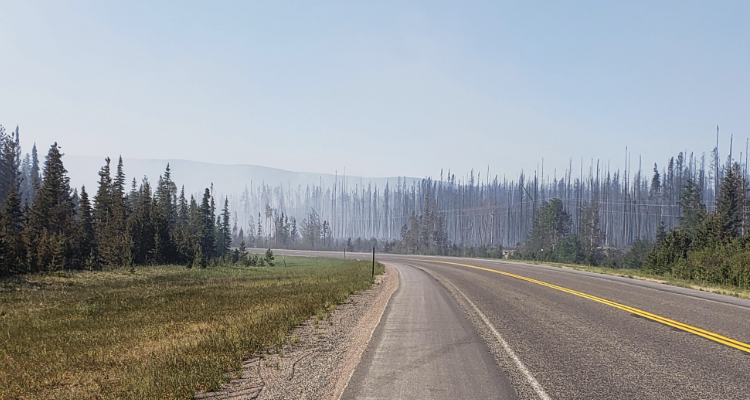 Mountain Home, WY.   –   On Sunday, firefighters placed an increased emphasis on safety.  Approximately 0.25” to 0.50” of rain fell across the fire area on Sunday, which helped to mitigate some of the threat from the fire, but also made access to and around the fire challenging. Crews worked to improve sections of the fire perimeter that were not yet contained, and patrolled the areas that are contained. Fire managers worked with utility providers in the area to access and repair any damage to infrastructure on Sunday. The Badger Creek Fire is 20,090 acres, and now 85 percent contained.
On Monday, firefighters will focus their efforts on those sections of the fire perimeter that remain uncontained. Crews will address areas along the southern edge of the fire that they were not able to access on Sunday due to the poor access and road conditions. Fire engines will continue to patrol communities along Hwy 230 and on the southern edge of the fire. As cooperators continue to assess and repair utilities affected by the Badger Creek Fire, fire managers will continue to support those efforts to allow residents back into evacuated areas as quickly as it is safe to do so.
There will be a public meeting for the Badger Creek Fire on Tuesday, June 19 at 7:00 p.m., at the Albany County Fairgrounds where Fire officials and cooperators will provide updates about the current status of the fire and respond to questions and concerns from the audience.
Beginning at 9:00 a.m. on Monday, June 18, Wyoming Highway 10 will reopen from Woods Landing to the Colorado state line. Colorado Highway 127 will also be reopened from the intersection with Colorado highway 125 to the Wyoming state line. Wyoming Highway 230 remains closed between Woods Landing and the Colorado state line at this time.
The communities of Mountain Home, Fox Park, and Foxborough, and those along Wyoming Highway 10 from Woods Landing south to the Colorado state line (including Woods Landing, New Jelm, and Jelm) are no longer under evacuation. Residents of the Mountain Home community should be aware that power to the community may not be restored until Monday night. Residents of Fox Park and Foxborough will only be able to access their community from Albany, as Wyoming Highway 230 remains closed at this time. Evacuation orders remain in place for the communities of Wold Tract, Wyocolo, Gramm, Beehive, and Miller Lake at this time.
An emergency closure remains in place on the Medicine Bow-Routt National Forest – Laramie Ranger District and the Arapaho and Roosevelt National Forest – Canyon Lakes Ranger District.
The cause of the Badger Creek Fire remains under investigation.