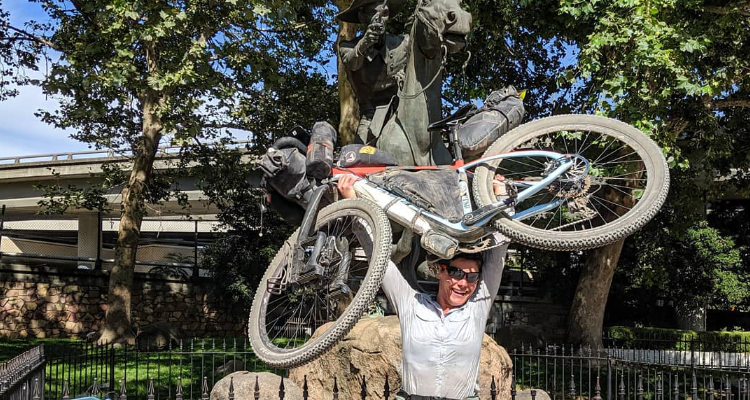 The former cycling road racer from Dallas, who made the trip as part of her effort to map out a bike-packing route along the historic trail knew it wouldn’t be easy.

But she wasn’t fully prepared for her toughest challenge yet in a remote piece of terrain in northern Nevada, where the climb was too steep and rough to ride and water was scarce.

More than 1,700 miles into the ride out of Missouri last year, she realized just how alone she was in a canyon north of Eureka.

“It was a little bit of a gut check,” Bennett told the Reno Gazette Journal in a recent interview.

“It is in the middle of a really remote section of route,” she said. “I had the moment of, ‘If something happens out here, I am kind of screwed’.”

As she slowly pushed her bike up the steep incline, she remembered an old piece of advice about endurance riding.

“If you have to cry, cry while you are moving,” Bennett said. “If you cry on the side of the road you still have to get up and cover that area.”

Today, Bennett hopes her work will help make the trail experience easier for future riders. And by highlighting a bicycle route that traces the Pony Express, she’s tapping into a rich vein of American history that still enchants people today, nearly 160 years after the last rider hung up his satchel.

“The thing about the Pony Express is it touches so many things in American history,” said Jim DeFelice, author of “West Like Lightning: The Brief, Legendary Run of the Pony Express.”

The express ran as the Civil War was unfolding and European settlers fueled by an expansionist government raced to stake claims to the vast natural resources and territory of the western U.S. The idea of riders traversing the territory by relay in 10 days captivated the nation.

“God bless anybody who can bike that route. That is intense, man,” DeFelice said. “In a way you are kind of replicating the experience.”

Bike-packing is a combination of backpacking and cycling that’s been around more than a century and in recent years gained popularity in the bicycling industry. In the U.S., bike-packing, unlike European-style touring on paved roads, is typically a backcountry sport in which riders follow single-track, two-track and remote dirt roads generally removed from cities and towns.

Bennett got her start in the sport in 2016 when she entered the Tour Divide, a race from Banff, Alberta, Canada to Antelope Wells, New Mexico on the Great Divide Route — one of the toughest races in North America.

Bennett made it about 400 miles before she threw in the towel when she suffered full body edema, which causes extremities to feel numb due to cold temperatures or stress.

Two months after dropping out of the race she embarked on another trip while she and her husband, Monte, were making their annual trip to Burning Man, where they help operate a bicycle-themed camp.

He dropped her off in Green River, Utah, more than 320 miles from the event near Gerlach, Nevada, so she could ride the rest of the way. It was her annual pilgrimages to Burning Man by car and bike that started her thinking about the Pony Express.

“The reason I was drawn to it was how remote a lot of the route is,” Bennett said.

or listen to an interview with Jan on the Bikes or Death Podcast: https://www.stitcher.com/podcast/bikes-or-death/e/62039111