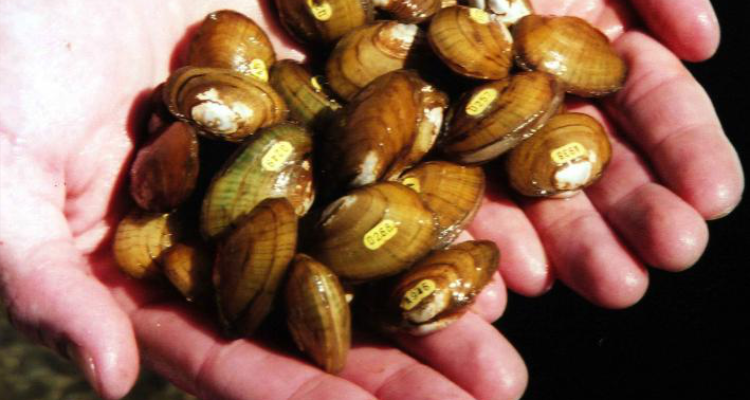 LARAMIE, Wyo.| BY EVE NEWMAN, LARAMIE Boomerang (AP) — The Wyoming Game and Fish Department reintroduced a native species of mussels to rivers in southeast Wyoming this summer after finding none in the state during recent surveys.

The plain pocketbook mussel is commonly found throughout the Mississippi River Basin, including the Laramie River, which drains into the North Platte River, whose waters eventually reach the Mississippi via the Missouri River.

“We’re on the periphery of their range out here in Wyoming,” said Laramie Region fisheries biologist Stephen Siddons.

Siddons said he and fellow biologists used to find pocketbook mussel shells in the North Platte and Laramie rivers as they flow through the plains on the eastern side of the state, downstream of mountainous waters.

“We know we had a thriving population at one point in time,” he said.

However, no live mussels have been found since 2008, when biologists found one in the Laramie River. Another live sample was recorded in the early 1900s.

“In the early 2000s, we started looking a little harder, when we realized we had something here we needed to pay attention to,” he said.

Biologists did sight surveys using buckets with clear plastic bottoms placed in rivers to look for the mussels. They also turned over rocks and dug through the sand. They even analyzed water samples for traces of mussel DNA across the historic range, the Laramie Boomerang reported.

“We did some pretty exhaustive surveys after that to see if we could locate any more, but we completely failed,” Siddons said. “It appeared they were gone.”

Siddons said the pocketbook mussel is general in its habitat preferences, able to survive in soft mud, cobbles and other types of river beds. Mussels are filter feeders, and adults can filter more than 10 gallons a day in their quest for food. In the process, they clean rivers of organic matter, contaminants and bacteria.

“This filter feeding process contributes greatly to water quality in our river systems,” he said.

Adults can grow to 5-6 inches across, and they’re a food source for some fish as well as mammals such as raccoons and mink. The plain pocketbook mussel is one of seven species native to the state.

After coming up empty in the search for the mussel, Siddons contacted the Nebraska Game and Parks Commission, which raises them in its hatchery system. They obtained 2,400 mussels for reintroduction at two sites in late July.

In collaboration with the National Park Service, they placed about 1,000 mussels in the North Platte River as it passes through the Fort Laramie National Historic Site. They placed the remaining mussels on a private ranch along the Laramie River upstream of Grayrocks Reservoir.

Biologists placed the mussels by hand in a variety of habitat sites — mostly in deep, slower water where they’re safer from predators. Each mussel is marked with either a colored dot, a colored tag or a microchip.

Siddons said he’s planning to reintroduce more mussels over the next few years with the goal of establishing a healthy population.

“Hopefully this critter is brought back and lasts for a long time now,” he said.