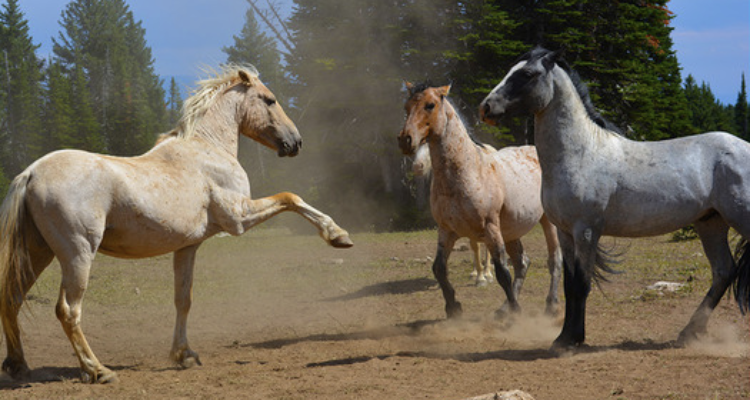 Lovell, WY.   –   The Bureau of Land Management is moving forward with plans to reduce the Pryor Mountain wild horse herd on the Montana-Wyoming border by 17 horses.

Ginger Kathrens, executive director at the Cloud Foundation, a wild-horse advocacy group, said the planned roundup and removal would drop the population number below genetic viability, and could threaten the long-term sustainability of the herd.

“And gradually they could die out,” Kathrens said. “They would become inbred, they would suffer physical anomalies like club-footedness and could no longer be a viable herd.”

The BLM says the appropriate number of horses for the herd is between 90 and 120 animals. But Kathrens pointed to research by Dr. Gus Cothran, an equine geneticist, saying between 150 and 200 horses are needed to preserve genetic viability.

Federal land managers say the 154 horses now on the Pryor Mountain Wild Horse Range are beyond the limit of what resources can accommodate, and reducing herd size is necessary to prevent the loss of native plants and soil erosion.

The Pryor herd are descendants of horses brought to the North American continent by Spanish conquistadors in the 16th century, and were longtime companions of the Crow Nation. Kathrens said the arid mountain range has kept the herd isolated from other wild and domestic animals. She added that removing 17 members of such a small herd also could threaten the group’s social structure.

“Horses live in family bands. They have close bonds with each other,” she said. “Some stallions only have one mare, and if that mare is targeted for removal, he has nothing. When you take away a vital member of the family, who will fill that job?”

The Pryor range was set aside in 1968 as the nation’s second horse preserve. The move came after public outcry over the practice of slaughtering wild horses for profit, which eventually led to the passage of the Wild and Free-Roaming Horse and Burro Act.

The BLM’s appeal process for the decision will be open until September 2. If horses are removed, Kathrens said they’ll likely be quickly adopted because of the popularity of the breed. But, she added, horses are safest in the wild with their family bands.