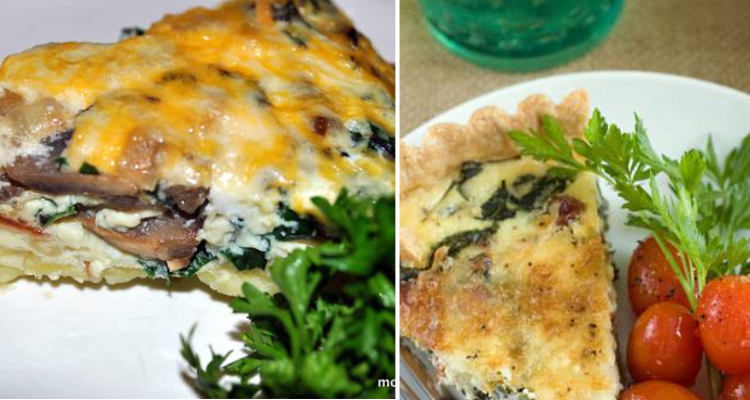 If you are a fan of eggs, pastry crust or bacon. Or more so all three in a gloriously savory medley, then today is a day in which you should celebrate! May 20th is National Quiche Lorraine Day.

For those uninitiated a quiche is considered a French dish, comprised of a pastry crust filled with eggs and cream (and/or milk), dotted with a variety of vegetables, meat or seafood. For those who know all-too-well quiche is savory, creamy and delicious!

Quiche Lorraine, then, is a variant of Quiche (named after the Lorraine region of France) which originally contained lardons* inside the typical open pie pastry with eggs and cream. Modern versions of this dish generally include cheese (which the original did not) and bacon replacing the lardon.

*(A lardon is a small strip or cube of fatty bacon, or pork fat.)

In celebration of this day, we offer up two modern variations on the classic Quiche Lorriane. We hope you enjoy!

Created by Lynne Daley, featured on foodista.com (CC BY 3.0)

Created by Kristi Rimkus, featured on foodista.com (CC BY 3.0)

Preparation:
1 – Preheat oven to 450.
2 – Toss sweet potato with flour. Spray a pie dish with cooking spray and layer sweet potatoes. Bake in the oven for 30 minutes until potato is just barely tender.
3 – In a large non-stick skillet cook bacon over medium heat until crisp. Approximately 5 minutes.
4 – Drain on bacon on paper towel.
5 – Swipe pan with paper towel to remove most of the bacon drippings and then add onion. Cook onion 5 minutes until softened, then add mushrooms. Cook another 5 minutes until tender. Add kale, crumbled bacon and garlic and cook another minute or two to wilt kale.
6 – Whip eggs, milk, salt, pepper and nutmeg until frothy.
7 – Top sweet potato crust with onion mixture. Pour egg over the top and spread cheese on top of the egg.
8 – Reduce oven heat to 400 and bake 20 minutes until egg is set.