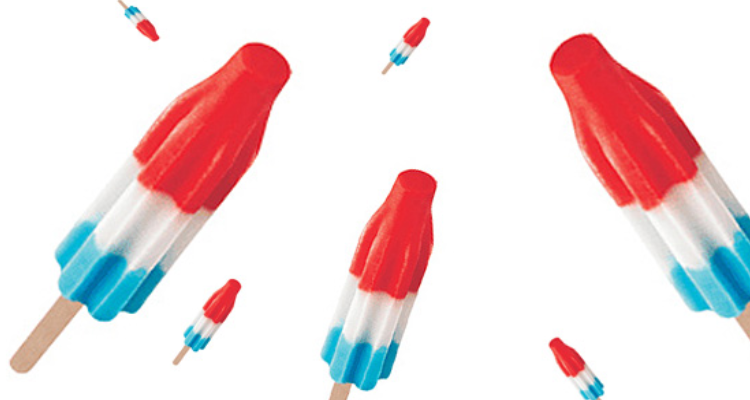 In the summer of 1955, Cold War tensions between the United States and the Soviet Union were heating up, with nervousness and caution surrounding the possibility of nuclear war building to a fever pitch.

But across America, for many children, parents and families, minds were more likely set on cooling down to beat the heat, than cooling political tensions.

The earmarks of summer afternoons, like baseball, and hotdogs, picnics and lemonade, fireworks and fireflies, were likely consuming the thoughts and the schedules of the average American.

During this era, icons of Americana like these were definitely things you would associate with summer and the 4th of July in the Mid-west of the nation.

But, there is another icon that we will be discussing today, one that lives somewhere in-between Cold War and cold treat. The Bomb Pop.

The frozen confection and special summer treat known as the Bomb Pop was a patriotic popsicle for a patriotic time in American history.

The staple of many an ice-cream truck, with its iconic red-white and blue color scheme, was born in July back in 1955.

The rocket-shaped, yet confusingly-named Bomb Pop was co-created by D.S. “Doc” Abernathy and James S. Merritt for Kansas City, Missouri’s Merritt Foods. the two conceived the idea for the popsicle during a drive from Memphis to Kansas City, where Abernathy was being relocated for work.

The patriotic pop would grow in popularity and become an icon, associated with the 4th of July and summer, the bomb pop would be sold in single servings in a variety of locations across the country, until it’s namesake company closed in 1991.

But, the bomb pop brand would be acquired only two years later, in 1993, by Wells Dairy from La Mars, Iowa. Wells would expand on the brand and elevate the rocket-shaped pop to new heights. But they would no longer be the only one.

For such an iconic brand, it is surprising that the bomb pop wouldn’t encounter any direct competition until nearly three decades later, in 1989. The competing “Firecracker Pop” was introduced by Popsicle brand that year, also featuring a red, white, and blue color scheme, but they  would swap out the lemon-lime flavor in exchange for “white lemon” flavor.

As  you can probably imagine, the similarities didn’t sit well with the new owners of the originator, and the two brands would go to war in the courts over their pyrotechnic themed confection.  Citing false advertising, involving calls for cease and desist, and spanning counterclaims over the term “original”, this insane war would last until 2014. While neither brand would necessarily emerge victorious, another actor would emerge on the battlefield in the form of Nestle’s Triple Rocket pops.

Today, you can find the cherry-lime-lemon-blue raspberry flavors bursting from patriotic pops from three separate brands in the form of Bomb Pops, Firecrackers, and Triple Rockets.

So, no matter which popsicle you choose this summer, let this story remind you of the humble beginnings of the frozen treat.

While the rocket-style pop branding may have taken off out of the frozen foods section, and rained down across American popular culture – the simple roots of the bomb pop are anchored in the 1950’s, in the middle of summer, in the heartland of America!