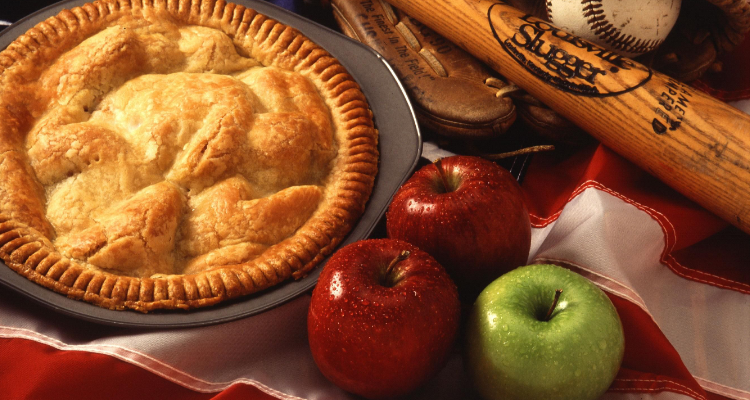 In observance of upcoming National Apple Pie Day, and with the recent rediscovery of 10 pioneer apple varieties previously thought extinct, we wanted to shine a spotlight on the origin story of the apple, discuss the evolution of the apple pie, and explore the cultural significance of both.

From origins in what is now present-day Turkey, to carbonized remains unearthed in prehistoric Switzerland, a connection to Alexander the Great, and to the earliest writings in China, Egypt, and Babylon – Apples have been intrinsically linked to the human story. Growers have cultivated and improved upon the fruit over thousands of years.

Today, there are between 25 and 30 kinds of wild apples growing throughout the world with seven kinds here in the U.S. because there are so many, it’s hard to say which varieties of apple were the first come to America.

When English colonists first arrived to North America they found only one native apple – the crab apple. The good news is that these early European settlers brought with them their English customs and favorite fruits, including a variety of apples.

When the colonists first began to grow and cultivate new apples in the United States, almost all of these apples were intended for use in cider, and not for eating.

It wasn’t until around 1800 when American farmers were growing a mind-boggling 14,000 varieties of apple, that apples better suited for pies would become more widely available.

A Piece of the (Apple) Pie

Variations on the apple pie or tart have shown up, in one form or another, since the middle ages.

In the 14th century pies were very different from the pies we know today. due to the scarcity of sugar, these early pies often didn’t contain any sugar and the pastry or “coffins” were generally not meant to be eaten.

More modern-day English apple pie recipes have been found to go back to the time of Chaucer (considered the greatest english poet of the middle ages). An 1381 recipe, compiled by the master cooks of King Richard II, is believed to be the earliest known apple pie recipe in the world. The list of ingredients included good apples, spices, figs, raisins and pears to be colored with saffron.

It wasn’t until the 15th century that dutch bakers would transform the crust-less apple pie into the lattice-style pastry we commonly see today. Recipes for these early dutch apple pies called for a standard pie crust, with the same dough that the pie crust is made of to fill in the top. The crust would be baked first. Then the filling, containing slices of soft apples with skin and seeds removed, along with spices like cardamom, ginger, cinnamon, nutmeg, clove, mace and powdered sugar, would be mixed with cream, then placed in the pie crust to be baked ‘or dried’ a second time.

As American As… Symbolism

In a country where apples weren’t native to the land – or the pie either – how is it that apples and pie become so embedded in the the cultural identity of America?

Perhaps the answer lies within the rich significance of the apple in relation to human mythology, religious traditions and art. Which would eventually add flavor to American folklore and popular culture.

Let’s start with mythology, stories of lush gardens adorned with apple trees and dotted with fruit, and of characters who would visit them in search of rejuvenating power. Icons of legend would guard these gardens that offered within promise of eternal youth, immortality or beauty. Moreover, apples in mythology also became associated with riches and with sexuality.

The advent of Christianity, would see the apple become an image associated with the fall of man in the Garden of Eden, despite the fruit not being specifically identified in Book of Genesis. Later the apple would be transformed into a symbol for life, redemption and salvation, with many icons and paintings over the following centuries depicting the infant Christ holding an apple – symbolic of his future mission as the redeemer of mankind.

The apple is also seen in a favorable light in several instances across both the Old Testament and New Testaments in the Holy Bible. The phrase ‘the apple of your eye’ comes from verses in Deuteronomy 32:10, Psalm 17:8 Proverbs 7:2, and Zechariah 2:8, implying an object or person who is greatly valued. In proverbs 25:11, the verse states, “a word fitly spoken is like apples of gold in settings of silver”. In the latter verses of the Song of Solomon, the apple is used as a symbol for beauty.

As far as apple symbolism in America is concerned, you’ve almost certainly heard the pop-culture phrase “as American as apple pie.”

The expression can be traced back as early as 1924, when it appeared in an advertisement in the Gettysburg Times. The phrase would grow to be used to express patriotism, but was often heard in tandem with other iconic American subjects of discussion, including baseball and rock-n-roll.

By world war II American soldiers would often tell journalists they were fighting for “mom and apple pie.” which eventually led to the phrase becoming a prevalent saying during the postwar years in the United States.

Before that, the first mention of apple pie in colonial America would appear in its first cookbook, American cookery, by Amelia Simmons. the cookbook would include two recipes for apple pie, neither of which would mention the origin of the concept, likely due to the intent of Simmons’ to use only terms known to Americans, and ingredients that were readily available to American cooks.

In the 1800’s, America’s favorite apple-based legend would tell of folk hero and pioneer apple farmer, John Chapman. Johnny Appleseed, as he would come to be known, would bring the apple to American folklore fame during his 40 year journey. Traveling an estimated 10,000 square miles of frontier country, Appleseed would go about new territories, leasing land, developing nurseries, and passing out apple seeds to anyone he met who was headed west.

As America expanded westward into new territories, traveling in covered wagons along the Oregon trail, many pioneers would carry apple trees, as part of their cargo for the purpose of grafting. Stories would tell of family orchards being planted even before ground was broken to build log cabin homes.

These are just a few short examples of the apple – and apple pie – becoming fixed to American symbolism, even beyond that of the apples rich significance in human history. There are so many more wherever you look.

By carving out our own piece of the apples’ storied existence, we as Americans, can truly say that we have made the apple – and apple pie – a legend all our own.