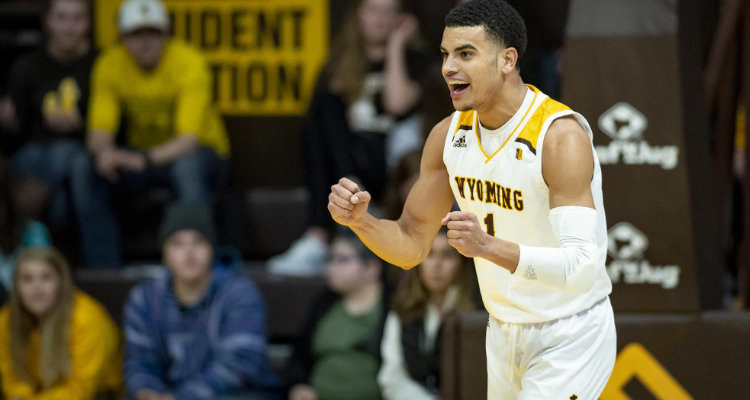 LARAMIE, WY. – The Wyoming Cowboys defense shined in a 59-46 win over San Jose State on Wednesday evening in the Arena-Auditorium. The 46 points was the fewest allowed under Allen Edwards and the lowest total since San Diego State scored 43 points in the Mountain West Championship game in 2015. The largest crowd of the season also saw Wyoming (5-14 overall, 1-5 MW) hold SJSU (3-15 overall, 0-6 MW) to a season-low 33 percent from the field.

“First of all, I want to thank Maury Brown for his generosity in purchasing 2,000 complimentary tickets for fans for tonight’s game,” Edwards said. “And I want to thank our fans for taking advantage of it and coming out and supporting these young men. I thought the energy in the building was really, really good.”

Wyoming shot a season-high 56 percent from the field going 23-of-41. Wyoming also recorded 10 steals on the night and has double-digit steals in back-to-back games for the first time since Denver (11/29) and Drake (12/2) last season. Wyoming also dished out 14 assists tying a season-high reached against South Carolina.

“I complimented our guys at the end of the game, while it wasn’t perfect, I thought that was our best energy and effort that I had seen — guys flying around and making it difficult for San Jose State to score,” Edwards said. “We didn’t do a great job rebounding, but we forced them into a lot of turnovers. I think they committed 11 turnovers in the second half.”

Senior Justin James led all scorers with 20 points. He also led Wyoming with five assists and recorded a career-high four steals. James now has 1,745 points in his career, as he passed Charles Bradley (1,744 from 1978-81) for seventh in school history. James has now scored in double-figures in 80 games in his career.

Redshirt freshman Hunter Thompson added 14 points going 5-of-8 from the field and 4-of-7 from behind the arc. Junior A.J. Banks led the Pokes with four rebounds and added a career-high four assists. Freshman Brandon Porter added seven points off the bench.

“I thought we played team basketball,” Edwards said. “Guys shared it, and J.J. was spectacular. The other other guy I thought played really well was A.J. Banks. He was very effective tonight. He had a really solid 40 minutes, probably the best game he’s had all year in the sense of being active, defending, rebounding and playing with confidence on the offensive end of the floor.”

The Cowboys raced out to an 11-0 lead on the Spartans in the opening five minutes of play. Wyoming held the Spartans to 0-7 from the field and James added six of the Pokes 11 points. UW opened the game going 4-of-5 from the field.

The Spartans would go on a 7-2 run to make it a 13-6 contest with just over 11 minutes left in the first half. Porter would stop the run with a triple to build the lead back out to nine points and later to 12 points.

James took the ball the length of the floor and hit two free throws after being fouled on a three-point attempt for a 24-24 game heading into the break. Wyoming shot 53 percent from the field in the half, but recorded 10 turnovers.

After the Spartans opened the second frame with four points, James added two triples to give the Pokes a 30-28 advantage three minutes into the frame.

Wyoming would use those six points and added seven more over seven minutes to build a 37-28 advantage with just under 12 minutes left in the half. James would get to the 20 point mark during the run.

After SJSU added a bucket, Wyoming would go on an 8-0 run led by a monster transition dunk by Trace Young to push the lead to 15 points with about eight minutes to play. Wyoming held that momentum with Thompson scoring 12 of his points in the second half, as his three point shooting was sprinkled into dunks from Banks and Young for the 59-46 win.

The Spartans were led in scoring by Michael Steadman with 11 points and eight rebounds. Isaiah Nichols added eight points and three assists.

The Cowboys head to Boise State on Saturday for a 2 p.m. MT start.