Cowboys and Bulldogs to Meet Saturday in Fresno 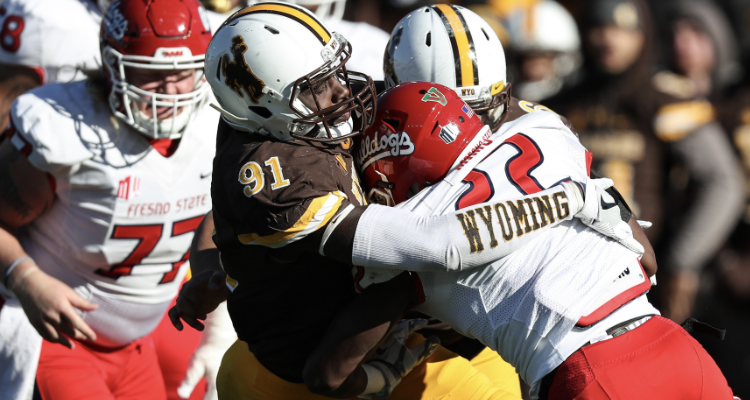 Cowboys and Bulldogs to Meet Saturday in Fresno

LARAMIE, WY.    –   The Wyoming Cowboys return to the road this Saturday to take on the Fresno State Bulldogs in a Mountain West Conference cross-divisional matchup. The Cowboys are looking for their first conference win of the season and will enter Saturday’s game with a 2-4 overall record, 0-2 in the Mountain West. Fresno State is 4-1 overall and 1-0 in the conference.

Saturday’s game is scheduled to kick off at 8:30 p.m., Mountain Time (7:30 Pacific) from Bulldog Stadium in Fresno, Calif. The Cowboys Sports Network radio broadcast will begin with the pregame show at 7:30 p.m., M.T.  The game will also be televised, check your local listings.

The Series
Saturday’s game will be the 12th meeting between the two schools. The Cowboys trail by one game in the overall series, 5-6. All but one of the previous 11 meetings was a conference matchup — Western Athletic Conference from 1992-97 and Mountain West Conference from 2012-Present. Wyoming won the lone non-conference meeting by a score of 35-28 in double overtime in the 2009 New Mexico Bowl when Wyoming was a Mountain West member and Fresno State was still a member of the WAC.

Last year’s meeting was a low-scoring game dominated by the two teams’ defenses. The Cowboys rallied late, scoring a touchdown with 2:25 remaining in the game to narrow Fresno State’s lead to 13-7. Wyoming then followed that scoring drive with a final drive of the game that saw the Cowboys take the ball all the way down to the Fresno State 27-yard line. But on the final play of the game, Cowboy quarterback Nick Smith, playing for an injured Josh Allen, was unable to escape the Fresno State pressure and was tackled before he could get a pass off as time expired. Fresno State held on for the 13-7 victory to capture a road win in Wyoming’s War Memorial Stadium.

Wyoming Defense Has Outstanding Performance at Hawai’i
Wyoming’s defense put together one of its best performances of the season against the Hawai’i Rainbow Warriors last week. The Cowboys:

– Held Hawai’i to 17 points — 25 points under its season average of 42 points per game and its lowest point total of the season.

– Limited the Rainbow Warriors to 304 yards of total offense — 191 yards under their average of 495 yards.

– Generated two takeaways, one interception by defensive end Carl Granderson and a fumble recovery by nickel back Tyler Hall, who also forced the fumble by ripping the ball out of a UH running back’s arms.

– Scored their first defensive touchdown of the season on a 61-yard interception return for a “Pick Six” by Granderson.

– Tackled Hawai’i players for 7.0 tackles for loss for -22 yards and sacked the UH quarterback 5.0 times for 17 yards in losses.

California Cowboys
Wyoming has 28 players on its roster from the state of California. That is the most of any state represented on the Cowboy roster. The next two closest states are Colorado (24) and Wyoming (21).

At Hawai’i, Evans set a personal best with 192 rushing yards, eclipsing his previous high of 190 in the 2018 season opener at New Mexico State. He averaged 8.0 yards per carry vs. the Rainbow Warriors, and had a long run of 63 yards.

Evans currently leads the Mountain West in total rushing yards (612) and ranks No. 14 nationally. He hasn’t played in the NCAA minimum 75 percent of his team’s games to rank in some other categories. But his 153.0 yards-per-game average would rank No. 1 in the MW and No. 3 in the nation, and his 7.85 yards per carry would rank No. 1 in the league and No. 5 in the country.

James Price Among Nation’s Leaders
Senior wide receiver James Price is having one of his best seasons as a Cowboy. Price has already caught 12 passes for 236 yards and one touchdown. His 236 yards leads the team. His one TD reception was a 72-yard catch and run against Boise State in Week 5. Price is averaging 19.67 yards per reception to rank No. 28 in the nation in that category.

Dontae Crow Plays a Unique Dual Role for Pokes — Punter and Punt Returner
In Wyoming’s game at Hawai’i on Sept. 6, sophomore wide receiver Dontae Crow from Sheridan, Wyo., started his first college game. But he didn’t start at wide receiver, he started at punter for the injured Tim Zaleski.

Crow punted five times for a 43.2-yard average, with a long punt of 46 yards. He was extremely consistent in punting the football for 40, 43, 46, 45 and 42 yards. The last time he had punted in a game was in high school. Crow was one of the greatest soccer players in Wyoming state history in high school.

Crow also took the field at another position vs. Hawai’i. He was back as a punt returner along with wide receiver Austin Conway. Crow did field one punt on a fair catch in the fourth quarter.

Cowboys Will Return Home Next Week
After two weeks on the road, Wyoming will return home Saturday, Oct. 20 to host Utah State for Homecoming. That game will kick off at 12:30 p.m.