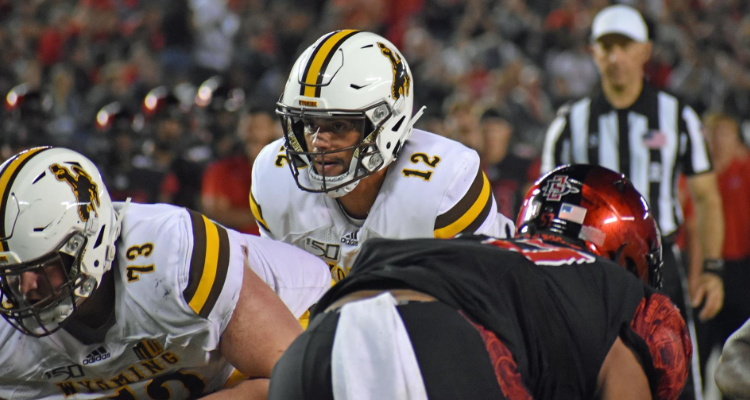 SAN DIEGO, CA. – After the Wyoming Cowboys (4-2, 1-1 MW) took a lead with under seven minutes remaining, San Diego State (5-1, 2-1 MW) added a score with 2:09 remaining to take the win in a Mountain West battle in SDCCU Stadium in San Diego, Calif. The last three games of the series have been decided by a total of eight points.

“I was talking with Coach (Rocky) Long before the game, and we both talked about how it would likely come down to a series or two at the end of the game,” Wyoming head coach Craig Bohl said. “We both knew it would be a physical game tonight and that is exactly what it was.

“I want to congratulate San Diego State,” Bohl said. “I thought they played really hard. I thought our team played hard, as well. We can play a little bit smarter. There was great effort on both teams, and I thought there were excellent plays by the players out there. We came up short, and they (San Diego State) won the game.”

Wyoming quarterback Sean Chambers found Raghib Ismail, Jr. on a 19 touchdown pass and Chambers would rush it in for two points for a 22-19 advantage for Wyoming. But SDSU went 76 yards on nine plays and quarterback Ryan Agnew found Daniel Bellinger from 12 yards out to take the lead and the game 26-22.

The Cowboys rushed for 157 yards in the game, as it was 100 yards over what SDSU, the national leader in rushing defense has averaged. Wyoming also passed for 109 yards on the night. The Aztecs recorded 329 yards of total offense with 209 coming through the air.

“Early in the game, I thought we were executing particularly well,” Bohl said. “We were getting man on man, and we were diagnosing some of their penetration on defense well. We were getting some good chunks of yardage, but then during the course of the game I thought San Diego State did a good job of making adjustments.”

Wyoming was led by Sean Chambers offensively with two touchdowns, as he threw for 109 yards and a touchdown. He also rushed for 49 yards in the contest. Running back Xazavian Valladay rushed 73 yards averaging 4.6 yards per rush.

Defensively, linebacker Logan Wilson recorded seven tackles vs. SDSU and improved his career tackle total to 368, moving him into a tie for the No. 6 spot on the Wyoming career tackle list with former Cowboy Gabe Knapton (368 tackles from 2008-11). Fellow linebacker Cassh Maluia led Wyoming with nine tackles, a season-high.

SDSU Ryan Agnew threw for 209 yards on 21-of-32 passing. He also rushed for 42 yards on the night. Juwan Washington rushed for 84 yards to lead the Aztecs.

The Aztecs got on the board first with a 47-yard field goal from Matt Araiza with 43 seconds remaining in the first quarter. The Aztecs went seven plays and 40 yards on the drive that was highlighted by a sideline catch by Kobe Smith for 19 yards on third down.

Wyoming responded to the SDSU score with a six play, 75-yard drive capped off by a one-yard rush to pay dirt from Sean Chambers to give Wyoming 7-3 lead in the opening moments of the second frame. The drive was set up by two of the four longest plays against the Aztecs this season, as Valladay rushed for a 26 yard gain and Chambers found Gunner Gentry for a 45 yard gain inside the SDSU 10-yard line.

The Cowboys added to the lead on another one-yard rush by Chambers for a 14-3 advantage with 5:30 left to play in the first half. Chambers rushed busted open a 21-yard rush to set up his eighth rushing touchdown of the season.

The Aztecs tacked on another field goal with 1:11 left in the half to make it a 14-6 game at the half. Wyoming rushed for 129 yards in the first quarter, which was a season-high for an Aztec opponent.

After the Pokes went three and out to open the second half, the Aztecs made it a 14-13 game on a 15-yard pass from Ryan Agnew to Juwan Washington with 7:48 left in the third quarter. A fourth down conversion the prior play by the Aztecs helped set up the score.

San Diego State took a 19-14 lead with 1:28 left in the third quarter on 10-yard rush by Washington. Once again a fourth down conversion helped set up the Aztec score, as this time Agnew found Jesse Mathews for a 25-yards catch to the Pokes’ 10-yard line.

The two teams would battle from there with the Aztecs earning the advantage and the conference win.

The Pokes host New Mexico for Homecoming on Oct. 18 in a 1 p.m. MT start inside War Memorial Stadium. Wyoming Athletics is asking all Cowboy fans to participate in the “Gold Rush” of War Memorial Stadium by wearing gold. The goal is to have the entire stadium blanketed in gold.