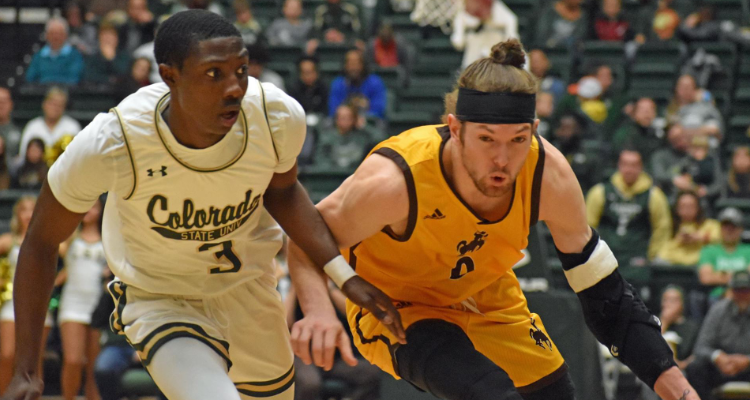 FORT COLLINS, Colo. – The Wyoming Cowboys struggled shooting from the field in a 72-61 loss to Colorado State on Saturday afternoon in Moby Arena in Fort Collins, Colo. in the first Border war matchup of the season. The Pokes were led in scoring by redshirt sophomore Hunter Maldonado with 25 points for his fifth game with 20 or more points this season.

“I thought Colorado State wanted the game more playing tougher and harder,” UW head coach Allen Edwards said. “They got some offensive rebounds and set the tone early. We struggled with physicality today. We have to be consistent for 40 minutes to be able to win basketball.”

Maldonado has scored in double-figures in every contest this season, as he headed into the game ranking second in the MW in scoring. Sophomore Hunter Thompson added eight points and seven rebounds to lead the team.

The Rams finished the contest with a 42-26 advantage on the glass and added 14 second chance points. Wyoming recorded 14 turnovers for the day with Colorado State adding 18 points off the miscues.

The Rams got off to a 5-0 start in the opening two minutes with all five points coming from David Roddy. But Thompson responded with four points to make it a 5-4 contest less than a minute later. Wyoming would take its first lead on a Maldonado three pointer for a 9-7 contest with 15:10 left in the first half.

The Pokes would go scoreless for over four minutes and the Rams went on a 9-0 run to take a 16-9 advantage with 11 minutes left. Wyoming battled back with a pair of buckets from Maldonado and Foster, but turnovers allowed the Rams to build the advantage back to five at 18-13 with 8:49 left in the frame.

After a Foster three-pointer, the Pokes went scoreless for over five minutes and the Rams went on a 14-3 run to close the half and take a 32-19 lead into the half. Wyoming struggled from the field shooting only 28 percent in the first 20 minutes.

After opening the half with a bucket from Thompson, the Cowboy offense went scoreless for over four minutes until a three pointer from Hendricks made it a 41-24 game with just under 16 minutes left. During Colorado State went on a 9-0 run during the Cowboy’s scoring drought.

But that was as close as the Pokes would get falling 72-61 dropping to 5-11 overall and 0-4 in conference play.

Colorado State was led by Roddy with 19 points and 13 rebounds. He added four offensive rebounds and was 7-of-11 from the field. Nico Carvacho added 12 rebounds and nine points. He is the all-time leading rebounder in MW history.

The Cowboys return to action on Wednesday hosting No. 13 San Diego State for a 7 p.m. start in the Arena-Auditorium.