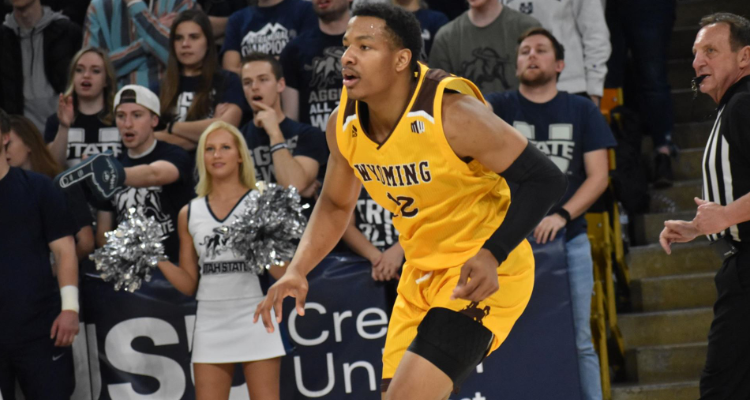 LOGAN, Utah – The Wyoming Cowboys ran into hot shooting in the opening frame in a 78-58 road loss at Utah State on Wednesday evening in the Dee Glen Smith Spectrum in Logan, Utah. It marked the eighth win in the last nine games for the defending Mountain West Champion Aggies. Utah State shot 55 percent from the field in the opening 20 minutes of play, but Wyoming held the Aggies to 44 percent in the second frame.

“I thought TJ Taylor battled in there tonight and fought down low and hit some three pointers, he continues to improve,” Edwards said. “Greg Milton III also gave us some very good minutes off the bench tonight.”

Utah State held a 42-25 advantage on the glass for the evening and outscored the Cowboys 40-24 in the paint. The Aggies also added 11 points on the fast break. Wyoming scored 14 points off turnovers for the game for their fourth game in the last five outing with double-digit scoring after turnovers. The Aggies finished the evening shooting 50 percent from the field and held Wyoming to 37 percent.

Maldonado recorded a pair of steals to help the Pokes jump out to a 5-2 lead early in the contest. The Aggies responded with a 10-0 run to take a 12-5 lead with 15:26 left in the opening half.

The Cowboys would hit 5-of-6 field goals to make it a 17-16 game in favor of the Aggies with 10:51 left in the opening frame. Sophomore Brandon Porter would add a pair of free throws to give Wyoming an 18-17 game capping a 7-0 Cowboy run.

Utah State responded with a 7-0 run themselves to take a 24-18 lead with 7:25 left. The Aggies were shooting 56 percent from the field at that point of the contest. Wyoming would cut the deficit to three points at 28-25 with just over four minutes left in the frame on a bucket from Taylor.

The Aggies went on a 14-2 run after the bucket from Taylor to finishing the opening stanza with a 42-27 advantage. Utah State recorded 24 points in the paint in the opening 20 minutes and held Wyoming without a field goal in the final 4:09 of the frame

Senior Sam Merrill added five points in the opening ninety seconds of the second half to extend the Aggie lead to 49-29. Taylor would add five points himself for the Pokes early in the second half, but Wyoming opened the stanza 2-of-8 from the field, as the Aggies maintain a 51-32 lead with under 16 minutes remaining.

The Pokes would cut the deficit to 10 points with 6:53 left in the game on a layup from freshman Kenny Foster, as Wyoming held Utah State to 1-of-10 from the field to get back into the contest. But the Aggies went on a 5-0 run to push that lead back to 15 points a minute later.

The Aggies were led by Merrill with 26 points, as he passed former Cowboy Justin James for fourth in Mountain West history with 2,078 points. Sophomore Justin Bean added 20 points and 14 rebounds for the night with Neemis Queta adding 15 rebounds to lead all players.

Wyoming returns to action on Saturday heading to Colorado Springs to take on Air Force at 2 p.m.