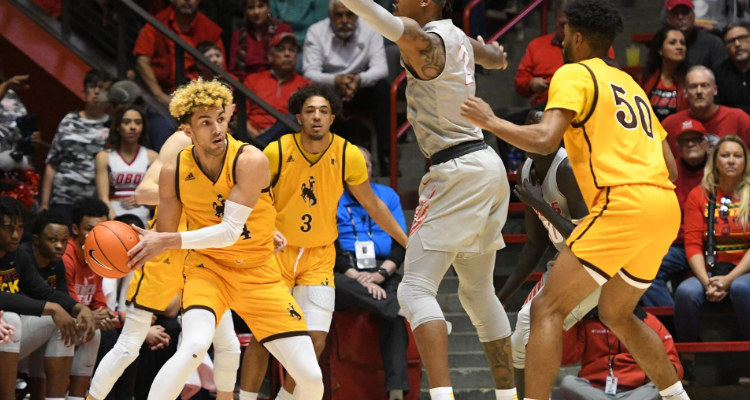 ALBUQUERQUE, N.M. – The Wyoming Cowboys dropped a 97-68 contest on the road to New Mexico on Saturday afternoon in Dreamstyle Arena (The Pit) in Albuquerque, N.M. the Lobos, who welcomed back two starters to the lineup scored 18 points on second chances for the afternoon.

“I told the team after the game that even before the end of the second half we gave them life by not rebounding the basketball,” UW head coach Allen Edwards said. “We attacked really well to open the second half and had an opportunity, but we stressed to our guys New Mexico is a team that can get very hot and when they do the hoop gets bigger. Some of our youth showed in this environment today.”

The Cowboys were led in scoring by redshirt sophomore Hunter Maldonado with 21 points. He has scored in double-figures in 23 games this season. Maldonado has scored 20 or more points in six times this season. He also added nine rebounds and six assists. Freshman Kwane Marble III added 17 points for his sixth-straight game in double-figures. Sophomore Trevon “TJ” Taylor added 10 points and six rebounds in his second-straight start.

“We love to have a kind like Maldonado, he has so much fight in him,” Edwards said. “Kwane Marble had a really good second half and got to the rim.”

Wyoming was outrebounded 46-27 for the night, as the Lobos finished the game with 13 offensive boards. Although the Pokes struggled on the boards the contest finished 38-36 in the paint in favor of the Lobos. New Mexico shot 51 from the field and 64 percent in the second frame. Wyoming was held to 43 percent from the field for the game.

New Mexico would continue to pressure the Cowboys in the paint with 14 second chance points in the first frame to take a 40-29 lead into the break. Both teams shot under 40 percent from the field in the first half, but New Mexico held a 29-13 advantage on the glass allowing for 34 field goal attempts.

New Mexico stretched their lead to as much as 13 points in the opening minutes of the second half. Hunter Maldonado and Taylor helped make it a 48-39 contest with 16 minutes left in the game. Marble added a fast break layup seconds later for a 48-41 contest.

UNM went on a 5-0 run for a 53-41 contest thanks to a three-pointer and fast break layup. The Lobos would continue that momentum and built the lead to 15-points at 61-46 on McGee alley-oop dunk. Vance Jackson added 14-straight points for the Lobos for a 77-53 game with nearly eight minutes left.

The Lobos finished the second half with nine three-pointers and shot 64 percent from behind the ark in the stanza on their way to earning the 97-68 win. Wyoming falls to 6-19 overall and 1-12 in conference play.

New Mexico was led by Corey Manigault with 28 points. He also led the team with nine rebounds for the afternoon. Martin added 23 points and Jackson finished with 20 points.

Wyoming will enjoy a mid-week bye before hosting Colorado State next Saturday at 2 p.m.