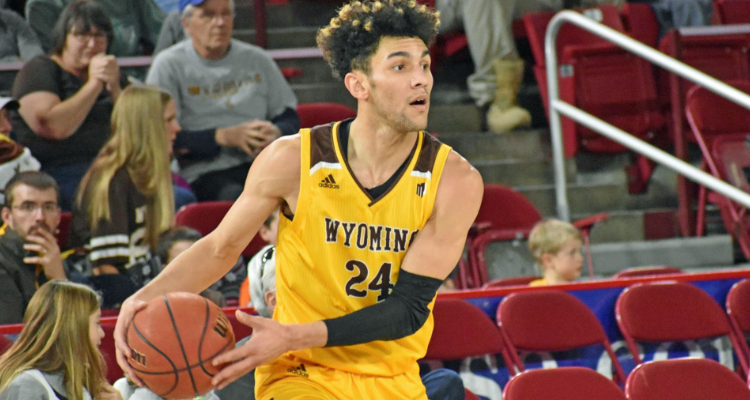 RENO, Nev.   –   The Wyoming Cowboys held one of the nation’s premier three point shooting teams to 15 percent below their season average, but the Wolf Pack prevailed with a late basket followed by a stop in the final eight seconds to take the 68-67 win over the Cowboys on Tuesday evening in the Lawlor Events Center in Reno, Nev.

“I think our guys took our message to heart about putting more time in the gym and in the weight room, but tonight was heartbreaking to lose that way,” UW head coach Allen Edwards said. But we are encouraged with the young group to come out and compete in hostile environment. I’m proud of the effort. We were right there and it was another opportunity and we will learn from this.”
The Pokes held the Wolf Pack to 24 percent from behind the arc, as Nevada ranked No. 13 in the nation at 39 percent heading into the game. Nevada was also held to six threes, as they came into the contest with 167 makes for the season for No. 11 in the nation.

Wyoming was led in scoring by a quad of double-figure scorers led by redshirt sophomore Hunter Maldonado with 17 points. He has scored in double-figures in every contest this season. He also added a double-double with 10 assists for the game, the most by a Cowboy since JayDee Luster had 11 against Peru State on Nov. 18, 2009. Sophomore forward Hunter Thompson with 16 points. He hit a season-high five threes in the game.

“We were disappointed in the last two games, but our encouraged with the efforts and we are excited to get back and play at home on Saturday,” Edwards said.

Both teams got off to slow starts offensively in the first four minutes, as Nevada built a 4-2 lead, but were 2-of-7 from the field. The Pokes points came off a rim rattling dunk from senior guard A.J. Banks. The Wolf Pack, one of the nation’s top three point shooting teams got hot from the floor hit three straight on their way to taking a 15-9 lead with 11:10 left in the first half.

The Pokes battled back to cut the contest to a 17-15 contest with 7:28 left in the first frame on a Banks jumper. Foster led the charge in the comeback with four points cutting through the Nevada defense. Marble tied the game with a layup for his first points of game to tie the contest at 19-19 at the 5:04 mark.

The Wolf Pack responded to the Pokes with a 5-0 run to take a 26-21 advantage with 2:40 left in the opening stanza, but the run was halted by a Maldonado layup. Nevada closed the half 3-of-4 from the field and took a 32-26 lead into halftime. Nevada, one of the top three point percentage teams in the nation were held to 27 percent.

Thompson opened the second half with a pair of three pointers to make it a 34-32 game in the first minute of the second half. Hendricks added an and-one four point play to tie the game with 17:21 left, it got him to double-figures. Thompson would get to double-figures and Marble added two free throws to make it once again a stalemate at 42-42 at the 13 minute mark and Foster gave Wyoming a 44-42 lead on a fast break dunk seconds later.

The two teams would exchange the lead over the next several minutes, but the Pokes took a 56-53 advantage on a Thompson triple and a pair of Maldonado freebies with 6:35 left in the game. It once again became a one possession game with the Wolf Pack taking a 62-60 lead with 2:42 left on a lob dunk and foul by Jalen Harris.

The Pokes would tie the game the following possession, but Nevada added another basket from Zane Meeks for a 64-62 lead with 1:05 left, but Thompson responded with his fifth triple of the game and gave Wyoming a 65-64 advantage seconds later.

Nevada was led in scoring by their tandem of Harris and Johnson with the two combining for 36 points. Harris added 20 points with Johnson adding 16.

Wyoming returns to action on Saturday hosting Fresno State in a 4 p.m. start in the Arena-Auditorium.