Cowboys Fall in Vegas as UNLV Rallies in Second Half 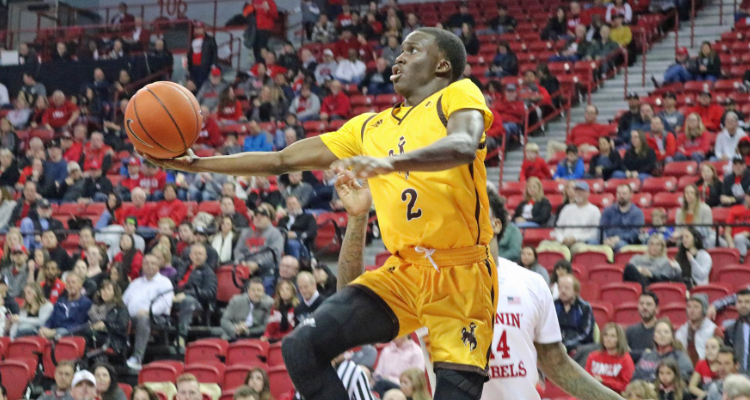 Cowboys Fall in Vegas as UNLV Rallies in Second Half

LAS VEGAS, NV.  –  After a strong first half that saw the Cowboys shoot 50 percent from the field and outrebound one of the nation’s top teams, the Runnin’ Rebels of UNLV rallied past the Pokes 68-56 inside the Thomas & Mack Center in Las Vegas on Saturday evening. Wyoming falls to 4-11 overall and 0-2 in the conference with the Runnin’ Rebels moving to 8-6 overall and 2-0 in the MW.

“I thought we went in the game a few things we focused on was rebounding the basketball and we did a great job executing,” UW head coach Allen Edwards said. “We went into the break with good energy and started the second half strong, But we went into a drought in the second half and that hurt us.”

Wyoming was led in scoring by senior guard Justin James, as he tallied 15 points and added seven rebounds. He also added four assists on the night. Redshirt freshman Hunter Thompson added a team-high 17 points with 15 coming in the first half. Junior A.J. Banks a native of Vegas added nine points, six rebounds and three steals in his homecoming. Freshman Trace Young added 10 points and a career-high eight rebounds to lead Wyoming in boards.

“I thought our zone was effective and did what we needed it to do,” Edwards said. “UNLV really adjusted well to Justin James and our other guys need to learn to be more assertive. We have to be better taking care of the basketball, but our guys have great fight and we will regroup and get ready for San Diego State.”

James scored the first six points of the game for the Pokes and Thompson then added a three-pointer to give Wyoming a 9-7 advantage nearly five minutes into the game. The Pokes would later build a 16-11 advantage on a 5-0 run led by James and Banks.

The Rebels would answer back with a 10-2 run to take a 21-18 advantage on the Pokes with 7:29 left in the opening half. But the Pokes would take back the lead on the shoulders of Thompson, as he would hit his second and third triples of the game and eight of the Pokes 10 points to take a 26-21 lead with just over five minutes left in the first frame.

Wyoming would build the lead to 32-23 thanks to free throws from TJ Taylor and Thompson with three minutes remaining. The Runnin’ Rebels would respond cloing out the half on a 5-0 run for a 32-30 lead for the Brown and Gold at the break.

The Pokes held UNLV to 33 percent from the field and held the Runnin’ Rebels to only four offensive rebounds, as they rank second in the nation in that category averaging 16 per game. Wyoming shot fifty percent from both the field and behind the arc.

The Pokes scored the first two baskets of the second half to take a 36-30 lead a minute into the frame. The Runnin’ Rebels would hit three-straight shots including two three pointers to take a 38-36 lead with 17:15 left in the game.

Wyoming would go scoreless for five minutes allowing the Rebels to build a 50-38 advantage nearly halfway through the half. The run saw the Pokes go 0-of-10 from the field.
The Cowboys cut the UNLV lead to single digits on an and-one play from senior Jordan Naughton with just over four minutes left to make it a 56-47 contest. UNLV would not allowing the Pokes any closer taking the 68-56 win.

The Runnin’ Rebels were led by Joel Ntambwe, as he scored a career-high 31 points and also added 10 rebounds. He was 11-of-17 from the field on the night.

The Cowboys continue their road swing on Tuesday heading to San Diego State for an 8 p.m. MT start on CBS Sports Network.