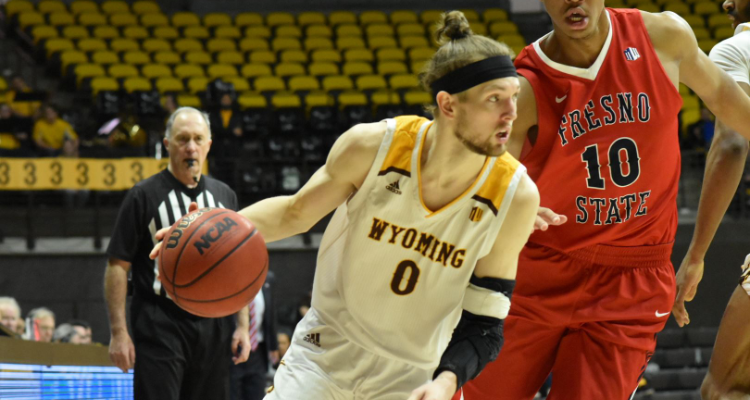 LARAMIE, Wyo. – The Wyoming Cowboys struggled from the field in a 65-50 loss to Fresno State on Saturday afternoon in the Arena-Auditorium. The Bulldogs recorded 21 second chance points and 19 points off of turnovers, but Cowboys responded with 12 offensive rebounds and 12 points on extra chances.

“I talked with the players after the game about how 40 of Fresno State’s 65 points came off our turnovers and off second-chance points,” Wyoming head coach Allen Edwards said. “While we did a good job defending for many of their possessions, we couldn’t close out those possessions by getting a defensive rebound. Fresno got 19 offensive rebounds on the night and seven of those offensive rebounds were from one guy — Nate Grimes.”

Wyoming was led by senior Jake Hendricks with 12 points hitting four threes for the game. He now has 121 in his career for the Cowboys. Freshman Kwane Marble added 12 points for back-to-back games in double-figures at home for the Denver, Colo. native. Redshirt sophomore Hunter Maldonado added seven points and a team-high eight rebounds and five assists.

“After our last two games (vs. UNLV and at Nevada), I thought we were taking steps in the right direction,” Edwards said. “But I thought tonight we took a step back in the sense of not stepping up to the challenge from a physical standpoint.”

The Pokes hit a pair of their first four three point attempts to take a 6-5 lead in to the opening four minutes of the contest. But Wyoming went 0-4 from the field with the Bulldogs taking 12-6 lead on the Pokes with 14:10 left in the first frame, as Fresno State went on a 7-0 run that was halted by a Maldonado three pointer.

Fresno State would continue the hot shooting hitting 7-of-8 from the field to build a 22-11 lead halfway through the half and added a triple moments later for a 25-11 advantage, which was answered by Marble for a 25-14 score with 7:52 left in the frame.

The Pokes would hold the Bulldogs to 1-of-10 from the field during a stretch, but the Cowboys recorded three turnovers of their own and could cut the lead to only nine at 25-19 with five minutes remaining in the first stanza.

Fresno State closed out the half on a 6-0 run to take a 31-16 lead into the half. Wyoming was held scoreless for the final 7:13 of the half and finished the first frame shooting 27 percent.

The Bulldogs would be the lead to as many as 23 points with 17:32 left in the game. Wyoming held Fresno State to 1-of-7 from the field and used a 10-0 run for a 43-31 game with 11:29 left in the half. Sophomore Brandon Porter added a three-pointer with other buckets from Marble (layup and three-pointer) and Trevon “TJ” Taylor.

Wyoming would continue the pressure as part of a 5-of-6 run from the field to make it a 48-3 game in favor of Fresno State with 8:50 left in the game. Hendricks hit his third three of the game to get the contest to that score. Taylor would later make it an 11-point game, but the Bulldogs brought the lead back to 14 points on an Orlando Robinson three with 6:51 left.

Hendricks hit his fourth triple of the game to make it a 10 point game at 55-45 with 2:30 remaining in contest. The Bulldogs would ice the game from the free throw line after that taking the contest 65-50 dropping the Pokes to 5-15 overall and 0-8 in conference play.

The Bulldogs were led by Robinson’s 19 points. Robinson went 6-of-8 from the floor and at the free-throw line in the contest while adding five rebounds. New Williams added 16 points and Nate Grimes grabbed a game-high 12 boards for Fresno.