Cowgirls Battle Back from 15-Point Deficit to Drop Boise State 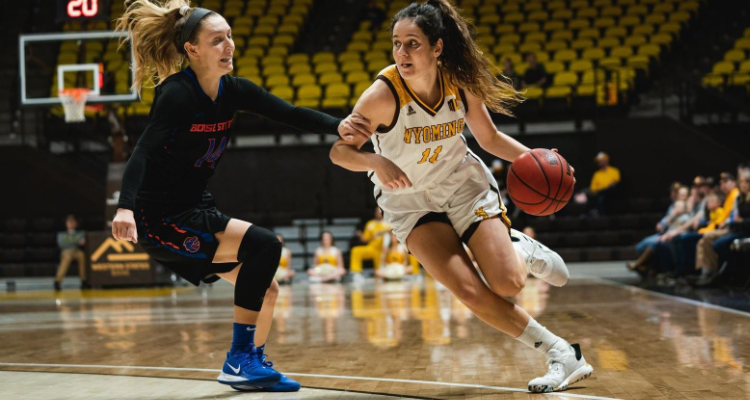 Cowgirls Battle Back from 15-Point Deficit to Drop Boise State

LARAMIE, Wyo.  – The Cowgirls started the night slowly, getting outscored 19-7 in the first quarter and trailing by as many as 15 points before battling back for a thrilling 73-68 victory over league-favorite Boise State. The Cowgirls (7-5, 3-0 MW) outshot the Broncos (10-5, 3-1 MW) from three and the free throw line in the come-from-behind victory.

“(In the first quarter) We looked like we hadn’t played since the 17th,” said head coach Gerald Mattinson. “But once we got our legs under us, once we talked about a few things, made a few adjustments and hit a few big shots, we whittled away like have all year, and I think that re-energized us. They realized they could play with this team.”

Sophomore Quinn Weidemann scored a game-high 19 points on an efficient 6-of-11 shooting, including making three of her four shots from long range. It is the sixth time this season and the 13th time in her career she has reached double-digit scoring. The 19 points are a season-high, topping the 15 points she scored at New Mexico. Weidemann also dished out three assists and had three rebounds and a steal.

Weidemann was joined in double-digit scoring by sophomore Alba Sanchez Ramos, who hit a timely three from in front of her own bench late in the fourth quarter, and freshman Jaeden Vaifanua. Sanchez Ramos scored 10 points and had five rebounds. It is the third time this year and fifth in her career reaching double-digit points. Vaifanua scored 10 points off the bench and had a team-high seven rebounds. She also added a block on the defensive end.

“I thought everybody that got in contributed in the way they needed to contribute,” Mattinson said. “Even if you got in for one, two or three minutes, you did what you were asked to do. You were able to get somebody some rest and do something valuable for the team.”

Erjavec led the Cowgirls with four assists, while recording a block and steal on the defensive end. Her steal led to a fast break layup, while her block led to Sanchez Ramos’ late three. Vitulova collected four rebounds and had a team-high two blocks.

Since Boise State joined the Mountain West, the two teams are tied in the series at 9-9, in what is one of the league’s best rivalries.

The Broncos were led by Mallory McGwuire’s 18 points and nine rebounds, while A’Shanti Coleman scored 13 points with four rebounds.

Weidemann opened the game’s scoring with a corner three, but the Broncos scored a long two to answer. The teams traded baskets, and an 11-0 Bronco run forced a Wyoming timeout with the Cowgirls trailing 13-5 with 5:12 to play in the quarter. Sanchez Ramos ended Boise State’s long run with a layup, but UW trailed 17-7 with 2:03 left in the frame. The Broncos scored two more points before the buzzer to extend their lead to 19-7.

Boise State scored a three to start the second quarter, and Kepenc answered with a trey of her own. After another BSU three, the Cowgirls used a 10-0 run of their own to force a Bronco timeout. During the run, Erjavec converted a three-point play and Kepenc scored a trailing three.

Out of the break, the Broncos ended the run with a long two. The teams traded scores until a Weidemann layup cut BSU’s lead to five points, 31-26, with 3:35 to go in the half. Vaifanua added a pair of free throws before a Bronco three made it 34-28. Olson found Weidemann for three to make it 38-34. Then, at the buzzer, she pulled up for a long three to cut the Boise State lead to 38-37 at the half time break.

The Broncos converted a long two to start the second half and added a three to go up 43-37. The Cowgirls got on the board with a layup, and BSU scored a two of their own to keep the lead. The squads answered each other’s scores until Kepenc and freshman McKinley Bradshaw combined for four free throws to make it 49-47 with 3:39 to go in the quarter. The Broncos scored six of the last eight points and went up 56-50 after three quarters.

VItulova scored from three-point range to start the fourth period, and Erjavec scored on the fastbreak to make it 56-55 for Boise State. Vitulova scored on the block to give Wyoming its first lead since 7:35 to play in the first quarter, as the Cowgirls started the quarter on a 7-0 run. After Rusk added a layup to the run, the Broncos called timeout, trailing 59-56 with 6:12 to play in the game.

Out of the break, the Broncos scored their first points of the quarter on a pair of free throws, but Erjavec scored a reverse layup on the baseline to keep Wyoming’s three-point lead. The Broncos scored three points to tie the game at 61 with 2:36 to play. Vaifanua scored a driving layup to put UW up, 63-61, with 1:34 to play, and the Broncos called timeout.

Out of the break, Erjavec blocked a Bronco three, and then found Sanchez Ramos for a corner three to put UW up 66-61 with just 57 seconds to play.

The Broncos started scoring layups but had to foul UW to stop the clock. Over the course of the final minute, the Cowgirls went 7-of-10 from the line down the stretch to hold off Boise State, 73-68.

“It is a big win, I’m not going to kid anybody,” Mattinson said. “This is a huge win, but every game now is important. But the thing about basketball is, I’m going to go home tonight, relax for a few hours, then at 5:30 or 6:00, I’ll come in and worry about Colorado State, which is another big game. In our sport, they just keep coming now. The next one is just as big or important as the last one.”

The Cowgirls return to the court on Saturday, Jan. 4, for the first edition of this year’s Border War, when they host Colorado State at 2 p.m. in the Arena-Auditorium.