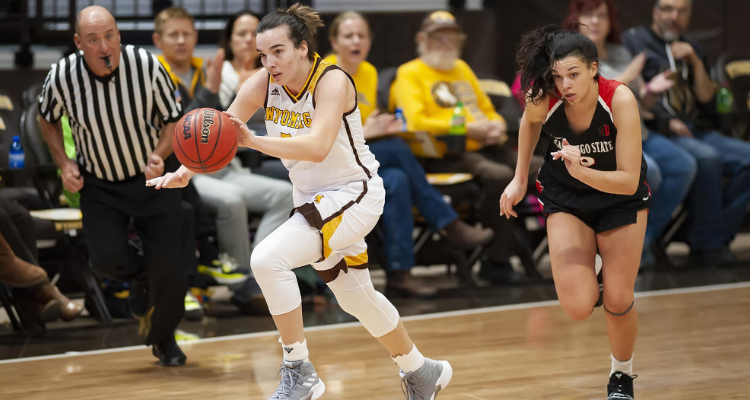 LARAMIE, WY.  – The Cowgirls (9-3, 2-1 MW) had three players score in double digits while holding the Aztecs (5-8, 0-2 MW) to just 33.3 percent shooting to earn their largest margin of victory in the series against the Aztecs, 87-45, Wednesday night in the Arena Auditorium.

“It was another good game,” said head coach Joe Legerski. “The ability to play at home for everyone is just magnified. I thought early tonight, we weren’t sharp defensively for what we wanted to try to do. Then, I thought in the second quarter we really stepped it up and figured things out what we wanted to get done. Going into the game, we knew we needed to keep them off the free throw line. We were able to do that in the first half. I also thought in the first half Sladjana (Rakovic) gave us as big a lift as we could have had. I think that’s by far her best game in a Wyoming uniform.”

Senior Sladjana Rakovic tied her career high of 13 points, while collecting four rebounds, three assists and three steals in just 14 minutes of action off the bench. She was also a perfect 4-of-4 from the field and 4-of-4 from the free throw line.

“Taylor Rusk is just Taylor Rusk,” Legerski said. ” Just nice and quietly goes out there, goes 5-of-7, does her job defensively and once again has five assists on zero turnovers. She’s really taking care of the ball, looking for people, making great decisions. All in all, we got better as the game went on.”

Junior Taylor Rusk’s five assists were a game high, and more than the entire Aztec team (3). Rusk scored 12 points for her fifth-consecutive game in double figures. Freshman Karla Erjavec scored a game-high 17 points on a career-high-tying seven made field goals. She also chipped in four assists, three rebounds, a steal and a block.

As a team, the Cowgirls shot 54.1 percent (33-of-61) from the field for their fifth time over 50.0 percent in a game this season, and their second straight time accomplishing that feat. The Cowgirls also shot 43.5 percent (10-of-23) from three point range, the sixth time this season with at least 10 threes in a game, and 91.7 percent (11-of-12) from the free throw line. The Cowgirls had 18 assists and just six turnovers, a new season low in the turnover department for Wyoming.

The Aztecs were led by Mallory Adams scoring eight points, while Najé Murray and Zayn Dornstauder each had seven points. Sophia Ramos had six rebounds, while three different Aztecs each recorded an assist.

Senior Bailee Cotton started the game by draining a long jumper off a dish from Erjavec, but the Aztecs answered right back. The teams traded blows until Erjavec grabbed a steal and found senior Clara Tapia for a fast-break layup to put the Cowgirls up 12-8 at the 4:25 mark. The Cowgirls held SDSU scoreless for over three minutes before an Aztec layup made it 15-10 for UW. A Rakovic trey put Wyoming up 18-12 after one quarter of play.

Rakovic then opened the second quarter with a strong move in the post. A Rusk three pointer and Rakovic driving layup capped a 9-0 run to start the frame for the Cowgirls, who led 27-12 at the 7:23 point of the second quarter. San Diego State was forced to call a timeout after a Tucker layup made it 29-15 with 6:43 remaining in the first half. Another 7-0 run, highlighted by a three from freshman Quinn Weidemann, put the Cowgirls up 34-15 with just over five minutes left in the half. The teams traded baskets again, but Erjavec found Cotton for a buzzer-beating three, and the Cowgirls took a 46-24 lead into the break.

The Aztecs scored the first points of the second half with four free throws, and the Cowgirls were cold to start the half until Erjavec drained a trey from straight away. That opened the lid off the basket, and Erjavec scored 10 straight points in 1:40, and the Aztecs called time trailing 56-28. Rusk scored a layup to put the Cowgirls up 30 at the 1:38 mark, 63-33. Rakovic calmly drained a pair of free throws to end the quarter with Wyoming leading 67-33.

Freshman Alba Sanchez Ramos checked in to start the fourth quarter and immediately drained a three for the Cowgirls. The teams traded buckets and free throws down the stretch, but freshman Tereza Vitulova scored nine points in the frame to keep the Aztecs at bay. When the final buzzer blew, the Cowgirls earned an 87-45 victory. The 42-point win is the largest for the Cowgirls against SDSU in the history of the series.

The Cowgirls will return to the hardwood to face Utah State in Logan on Saturday, Jan. 12. Tipoff in that game is scheduled for 2 p.m. (MT).