Cowgirls Come Back to Ground Falcons in Five 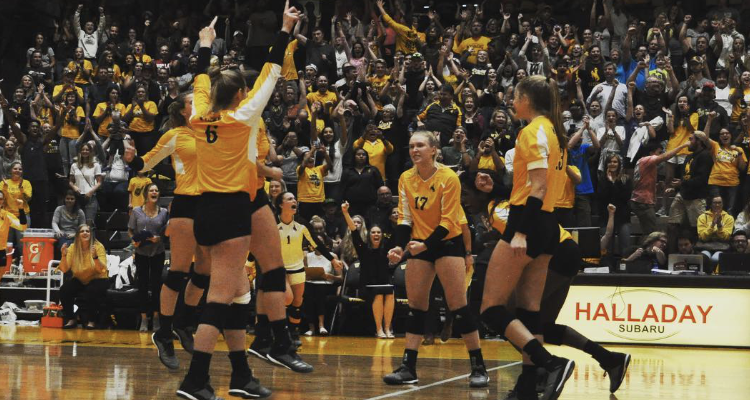 Cowgirls Come Back to Ground Falcons in Five

LARAMIE, WY. – After a slow start and falling down, 2-0, to open the match, the Wyoming volleyball team mounted an epic comeback to rally and defeat Air Force, 3-2, at the UniWyo Sports Complex. It marked the first time since 2013 at San Jose State that the Cowgirls have come back from a 2-0 deficit.

“This match is always tough,” head coach Chad Callihan said. “Air Force is the best that I’ve seen them, and always having to play them following Colorado State is an incredible challenge. I can tell our kids that, and I can tell them how good they are but it is so hard to get up the way they did Tuesday night and then turn around and do it again 48 hours later at the same level.

“I thought (Air Force) played a great game. When you see an Air Force team, you know they’re going to compete and tonight was no different. They’ve got some really talented kids to go along with that. I give our kids a lot of credit for persevering, but there are obviously a lot of things we have to work on. We finally get a little break to be able to get a couple of practices in and get some kids a little more comfortable with certain things.”

Middle blocker Reed Copeland and setter Cori Aafedt led the Pokes with double-doubles on the night, with Copeland racking up 12 kills and a career-high-tying 13 blocks to surpass 1,000 points for her career. Aafedt recorded 31 assists and 12 digs in the game, bringing her career assist total to 999.

“I think we have a lot of grit,” Copeland said. “That’s one thing that we have been talking about having all season is just grit and being able to out-grind teams. We really did that in the third, fourth and fifth. We had a really slow start in those first two sets, but being able to trust ourselves, each other and just grind helped us.”

Paced by Copeland’s 13, Wyoming was active at the net all night in racking up 18 total team blocks, which was the most in any match for the Cowgirls this season. Traphagan was second on the team with eight on the night to set a new season high for the junior. Along with Aafedt, two other Pokes found themselves in double-digit digs, as Madi Fields led the team with 17 and Halie McArdle added 11.

“I’ve seen teams do that to us, when they’ve fallen behind two sets and then fought back to the finish,” McArdle said. “It was a nice feeling to do that to another team. The game is never over until you get to the end. That’s what we keep telling each other, is that the match isn’t over until someone wins three out of five.”

After a 5-0 run from the Cowgirls to open the first set, Air Force responded with a 10-1 run to take the lead for good on the way to a 25-22 set victory. The Falcons also came up with a back-and-forth second set that included 18 ties and eight lead changes, taking the final two points to win the frame, 25-23.

Wyoming held Air Force to a -.057 hitting percentage in the third set, utilizing efficient offensive sets from McBride, McArdle and Traphagan to take the set, 25-20. The Pokes looked much more settled in to open the period, expanding their lead to as many as seven before the midway point; however, the Falcons refused to cede the set, and battled back to lead at 18-17 and 19-18 before Wyoming compiled a 7-1 run to end the frame and force a fourth.

McBride racked up five kills in the fourth set to lead the Pokes to a 25-23 edge and force a decisive fifth. Tied at 20-all, McBride scored three-straight kills to give Wyoming a 23-20 lead late. Air Force would tie it back up at 23 apiece before a kill from McMahon and a block from Waitsman and Copeland put the set away in favor of the Pokes.

Copeland was huge for the Cowgirls in the fifth, racking up three kills and three blocks to help put the match away. The final period featured nine ties and four lead changes, but Wyoming scored four of the final five points of the match to come away with the 15-12 victory.

Wyoming will wrap up its mini homestand next weekend, with matches against Utah State and Boise State. The Cowgirls will host the Aggies on Thursday, Oct. 11 at 6:30 p.m. before a 1 p.m. contest with the Broncos the following Saturday.