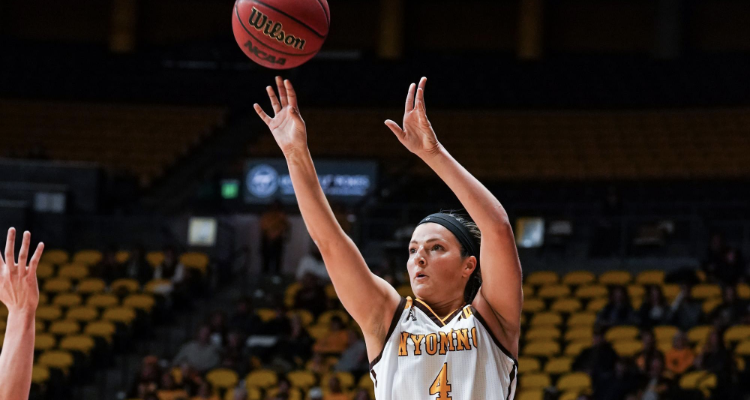 “First of all, give Utah State some credit because I believe your opponent can dictate how things go, so first and foremost, I’m going to give them credit,” said head coach Joe Legerski. “They’re big inside, they really bothered Bailee Cotton on the inside. To shoot 4-for-21 from three, and I thought all of about three of them were good shots, we have to shoo the ball better than that. I thought today showed that when the ball wasn’t going down, we tightened up.”

For the Aggies, Shannon Dufficy led the way with 24 points and 14 rebounds, while Hailey Bassett-Meacham added 11 points and four blocks. Eliza West added six assists to guide their offense.

Cotton opened the game’s scoring as Erjavec drove the lane and found the senior open for a layup on the weak side. A 7-0 run gave the Cowgirls a 9-4 lead, punctuated by a Gomez key from the top of the arc. Rusk ended a 2-and-a-half minute Cowgirl scoring drought with a driving layup, and Wyoming took an 11-6 lead at the 2:02 mark. Even with seven uncharacteristic turnovers in the first quarter, the Cowgirls took that 11-6 lead into the first quarter break.

The Aggies scored the first points of the quarter and used a 7-0 run to take a 13-11 lead at the 7:24 mark. Cotton ended a long scoring drought with a layup from Gomez, and the teams took that 13-13 tie into the 4:59 timeout. But the Aggies went on a 7-0 run, and the Cowgirls took time at 2:03, trailing 30-13. Rusk immediately ended a five-minute drought with a driving layup out of the timeout. Rusk then hit a buzzer-beating floater, and the Aggies took a 22-17 lead into the halftime break. The Cowgirls trailed at the halftime break for just the second time this season.

Erjavec drained a three ball to open the second half, and trim the USU lead to 22-20. The Aggies answered, but a Gomez three tied the game at 26 with 4:30 left in the quarter. The teams traded baskets, and the Aggies added a few free throws to make it a 32-30 lead at the 2:30 mark in the third quarter. Rakovic sank a pair of free throws and tied the game again at 32-all with two minutes to play in the third frame. Erjavec made a layup and the Cowgirls ended the quarter tied at 34, erasing a five-point halftime deficit.

Dufficy started the final quarter with a pair of back-to-back scooping layups. At the 4:27 media timeout, the Aggies held a 40-34 lead. Weidemann scored UW’s first points of the quarter on a driving layup, but the Aggies responded to keep their six-point lead. The Cowgirls forced free throws to extend the game, but at the buzzer, Utah State took a 50-42 win.

The Cowgirls return to action on Saturday, January 19, when they host New Mexico at 2 p.m. (MT) in the Arena-Auditorium.