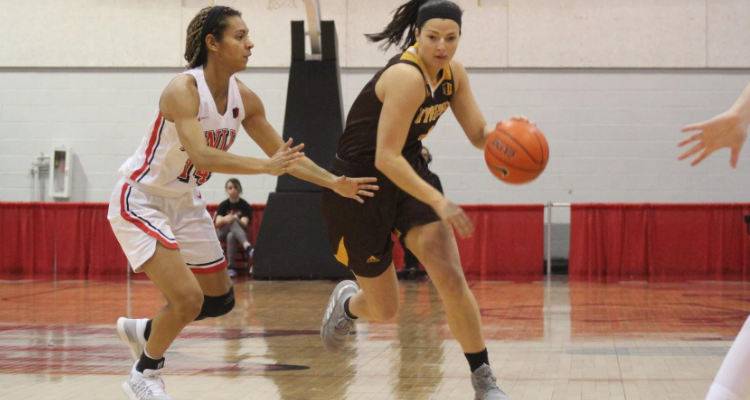 LAS VEGAS, Nev. – For the second-consecutive game, the Cowgirls held a halftime lead on the road, but struggle din the third quarter on their way to a Mountain West loss. Wyoming (7-8, 3-3 MW) fell on the road by a final score of 65-53 against UNLV (8-8, 4-1 MW). The Cowgirls have now lost three in a row, while the Lady Rebels have won five straight.

“It’s kind of become our story,” said head coach Gerald Mattinson. “The last three or four games, that’s our storyline. We play well enough defensively, play a great first half, but the third quarter is just killing us. We don’t have an idea why. We’ve talked with captains, we’ve talked with the team, the team’s talked. You’re not going to beat teams scoring in single digits coming out of halftime. It’s just not going to happen.”

The Cowgirls were led offensively by senior Taylor Rusk and sophomore Tereza Vitulova. Rusk scored a season-high 16 points on an efficient 6-of-9 shooting, including making three shots from beyond the arc. Rusk also had a team-best four assists and a team-high three steals. For Rusk, it is the third game in a row reaching double-figures and the sixth time this season.

Vitulova matched Rusk’s scoring with 16 points, and grabbed five rebounds on the day. Vitulova tied her career high with two made three-point field goals. Vitulova has now reached at least 10 points in three straight games and 12 times overall this season.

Sophomore Quinn Weidemann scored eight points and had three assists, a block and steal for UW. Freshman Jaeden Vaifanua had seven points and seven rebounds to go along with an assist.

UNLV had pair of double-digit scorers in Latecia Smith (19) and Rodjanae Wade (22). Wade had a double-double with a game-high 10 rebounds.

The Lady Rebels started the game off with a pair of free throws before Vitulova scored a three for Wyoming. After four points for UNLV, a Rusk three tied the game at six, and UW used a quick 5-0 run to make it 11-6 with 5:23 to play in the opening frame.

Weidemann and Vaifanua scored five quick points after a UNLV layup to go up 16-8, but the Lady Rebels scored eight of the next 10 points in the game to make it 18-16 for UW. On the last possession of the quarter, Vaifanua scored a layup to make it 20-16 for Wyoming after one quarter.

The Lady Rebels started the second quarter with a pull-up jumper in the paint, and Vitulova answered with a hook shot on the baseline for UW, making it 22-18 with 7:24 to play in the half. The teams traded threes before another UNLV triple made it a one-point game, 25-24, with 3:26 to play in the second.

Sanchez Ramos ended a 3:10 Cowgirl scoring drought with a pair of free throws, and Rusk drilled a three-ball on UW’s next possession to make it 30-24 for Wyoming. The Lady Rebels added a layup, and the teams went into the locker room with Wyoming leading 30-26.

UNLV scored first in the third with a layup, but Vitulova answered down low for UW. After the teams traded baskets, the Lady Rebels scored three straight free throws to make it a one-point game, 34-33 with 4:33 to go in the quarter. UNLV continued its run with a layup and a pair of free throws to go up 37-34.

Weidemann scored a three from the corner to tie it up and end a four-minute scoring drought for Wyoming. Vitulova snapped a 5-0 UNLV run with a layup, but the Lady Rebels scored on their last possession and led 44-39 after three quarters.

Rusk scored from the near corner to start the fourth frame, and after the teams traded baskets, a Rusk and-one play cut the lead to one point, 48-47 with 6:00 to play. Then, Rusk stole the ball and found Vitulova on the fastbreak for a layup to give UW a 49-48 lead with 5:25 to go, forcing a UNLV timeout.

Out of the break, the teams traded baskets and the lead five times until UNLV scored four free throws in two possessions to go up 56-53 with 2:41 to play. A corner three by the Lady Rebels capped a 9-0 run and gave the hosts a 61-53 lead with 1:13 to go in the game. After a Cowgirl turnover, Wyoming started fouling the Rebels, and UNLV held on for the

The Cowgirls continue Mountain West play when they host Nevada on Wednesday, Jan. 15, at 6:30 p.m. in the Arena-Auditorium.