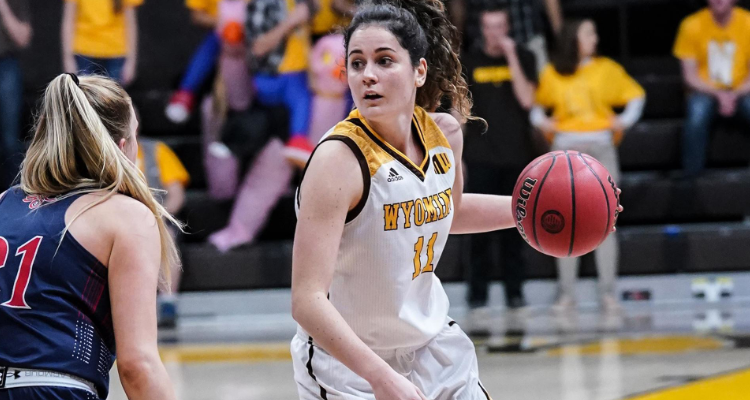 LARAMIE, Wyo. – The Cowgirls trailed by as many as 13 points in the first half of their game against Saint Mary’s, but they slowly chipped away and walked off the floor with a 69-67 win. The Cowgirls (2-0) were clutch at the free throw line to hold off Saint Mary’s (1-2) late push.

“I’m so proud of our young women,” said head coach Gerald Mattinson, who joined Bonnie Hulstrand and Chad Lavin as the only coaches in Cowgirl history to start their career on a winning streak. “They came out and played so hard. Once again, we made some mistakes, and we’re going to make mistakes, but we grew up some today. They experienced a very good team. That team is very good. They’ll win a lot of games in their conference. They shoot the ball so well, and they have great size. We executed the game plan we had put together. That’s another step of growth. Overall, we came ready to play, we scrapped and we battled.”

Freshman Jaeden Vaifanua scored the game-sealing free throws, while sophomores Karla Erjavec and Quinn Weidemann each went 2-for-2 from the line in the final minute of the game. The clutch shooting kept the 2,402 fans in the Arena-Auditorium on their feet.

“Once again, our fans were awesome,” Mattinson said. “When your fans are up there yelling for you, and they’re cheering for you, it lights a fire under our team. It means so much to them.”

Weidemann scored nine points and had a career-high eight rebounds. She stuffed the rest of the stat sheet with a career-high-tying four assists, a block and a pair of steals. Weidemann’s block came on a Saint Mary’s three-point attempt with 14 seconds to play to preserve a four-point Cowgirl lead.

Vitulova opened the game’s scoring with a hook shot in the paint, and she converted the and-one opportunity. The Gaels answered with a corner three, and the teams traded points to a 7-7 tie. The Gaels went on a 5-0 run to take a 12-7 lead at the 5:12 mark. Saint Mary’s lead extended to 15-7 before Sanchez Ramos ended a 5:58 scoring drought with a pull up jumper at the elbow. However, the Gaels took a 20-9 lead into the quarter break.

Weidemann scored a layup to start the second quarter, but the Gaels responded on their next possession with a layup of their own. The squads traded 5-0 runs, and the Gaels led 27-16 with 6:05 to go in the first half. Junior Jaye Johnson ended another long Cowgirl scoring drought with a bucket in the paint, but SMC held a 29-18 lead with 2:17 to go in the quarter.

The Cowgirls went on a 7-0 run to end the half thanks to a Weidemann jumper, Sanchez Ramos three and Bradshaw jumper. After 20 minutes, Saint Mary’s held a 31-25 lead at the midway point.

The Gaels struck first in the second half with a layup, but the Cowgirls came out firing from three point range. Sanchez Ramos drilled two of three Cowgirl treys in the first four minutes, and cut the lead to 40-38 with 6:06 to go in the quarter. However, the Cowgirls struggled to get stops, and the Gaels pushed their lead back to 49-43. A Bradshaw three before the buzzer made it 49-46 for SMC at the end of the third quarter.

Saint Mary’s scored first in the fourth, but Vitulova answered with a score on the block. After a Bradshaw fastbreak score, a Rusk corner three gave the Cowgirls a 53-51 lead, their first lead since early in the first quarter. Vaifanua then hit a three and a fastbreak layup to give UW a 58-51 lead with 5:15 to play, forcing a Saint Mary’s timeout.

The Gaels ended a 4:18 scoring drought with a pair of field goals, but Weidemann scored a three from the Corner to put UW up 61-53. After an SMC layup, the Cowgirls called timeout with a 61-55 lead and 2:58 remaining in the game. The Gaels scored three quick points, but Rusk drove to the basket for a layup, and with a minute to go, the Cowgirls held a 63-58 lead. After a SMC free throw, the Cowgirls turned the ball over and the Gaels scored in the paint to make it a two point game, 63-61.

The Gaels put Erjavec on the line, and she calmly sank both to put the Cowgirls back up by four, 65-61, with 26 seconds to play. The Gaels quickly drained a three and fouled Weidemann, who scored both her shots to give UW the 67-64 lead. The Gaels scored a free throw after being fouled, and then sent Vaifanua to the line, who made both her shots to put the game away. Weidemann blocked a Gaels three, and Olson was fouled after picking up the rebound. The Gaels added a layup and Weidemann dribbled out the clock on a 69-67 win.

Saint Mary’s was led by Emily Codding’s double-double with 19 points and 11 rebounds, while Madeline Holland had 13 points and four assists.

The Cowgirls are back in action on Thursday, Nov. 14, when they travel to face Denver for a 7 p.m. tip.