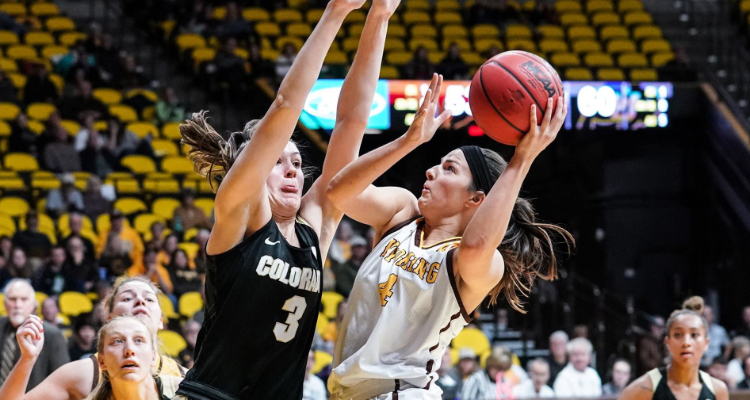 LARAMIE, Wyo. – The Cowgirls trailed by as many as 11 points in the fourth quarter before cutting Colorado’s lead down to five, but UW couldn’t quite close the gap in its 66-56 loss to the Buffaloes. Colorado (3-0) was strong on the glass against Wyoming (2-2) on Sunday afternoon.

Wyoming was forced to foul the Buffs multiple times in order to stop the clock with the game winding down, but UW could not convert on the offensive end to make up the deficit.

“They got more aggressive and more physical,” said head coach Gerald Mattinson. “We were worried with their physicality to begin with, and they just came out and got after it. Their coach got after them a couple times about doing it, and they did it.”

Wyoming was led by senior Taylor Rusk, who scored a season-high 14 points, 11 of which came in a third quarter scoring explosion. It’s her second game this season and the 40th of her career reaching double-digit points. Rusk added a season-high six rebounds and collected two steals.

“For the most part, I thought we battled,” Mattinson said. “Their size is huge, and they’re athletic. I thought we fought, and we scrapped. I think we got tired. They’re a little bit deeper than us and a little more experienced, and I think that showed up.”

Sophomore Quinn Weidemann scored nine points and had a pair of rebounds. She also tied for the team lead in assists with three with fellow sophomore Karla Erjavec. Erjavec also scored eight points, including a career-high six made free throws.

“My issue today has nothing to do with the intensity level we played with or what we brought,” Mattinson said. “We played our hearts out. We played as hard as we can play. We just need to cut down the fouls and take advantage of a few more scoring opportunities.”

Rusk struck first with a corner three, and Sanchez Ramos scored five in a row to give Wyoming an 8-0 lead to start the game. However, CU answered with a 7-0 run to get on the board. Vitulova ended a 3:31 Cowgirl scoring drought with a pair of free throws, and Wyoming had a 10-7 lead with 2:46 to play in the quarter. The teams traded points, and the Buffaloes beat the buzzer to take a 16-15 lead after one quarter.

Colorado opened the second with back-to-back jumpers before Vitulova scored a three from straight away. After a pair of Buffalo free throws, Sanchez Ramos scored four in a row to tie it at 22. However, CU responded with an 8-0 run to take a 30-22 lead. Redshirt junior Selale Kepenc ended Wyoming’s 3:06 scoring drought with a pair of free throws with 2:00 to play in the half, and the period ended with CU holding a 30-24 lead.

The Buffs scored first in the third with a pair of free throws, and Rusk answered with a driving layup. After CU scored four more, the Cowgirls called timeout, trailing 36-26 with 7:17 to go. Colorado took a 12-point lead after free throws, 40-28. The teams answered each other’s scoring, and CU led 45-33 with 3:38 to play in the quarter. Rusk’s 11th point of the quarter made it 45-35, and then a pair of Erjavec free throws cut CU’s lead to single-digits, 45-37. However, the Buffs scored four more before Vitulova converted a layup, and Buffs beat the buzzer to take a 51-39 lead into the fourth quarter.

Erjavec made two from the free throw line to start the final frame, and after a steal, Vitulova scored on the block to make it 51-43. A Weidemann three and a a pair of Bradshaw free throws made it 54-48 with 6:09 to play. Colorado scored four in a row to get back to a double-digit lead, 58-48 with 4:14 to play. Erjavec drove to the lane and converted an and-one to make it 60-53 with 1:35 to go in the game.

After a CU free throw, Weidemann converted an old-fashioned three-point play to make it 61-56 with 59 seconds to play. The Cowgirls fouled CU, and the Buffs made both their shots. The Cowgirls missed on their next possession and sent CU to the line for two more free throws. The Buffaloes added another free throw to take the 66-56 win.

The Buffaloes were led by Mya Hollingshed, who scored a game-high 17 points and collected three blocks. Emma Clarke had a double-double for CU with 10 points and 10 rebounds.