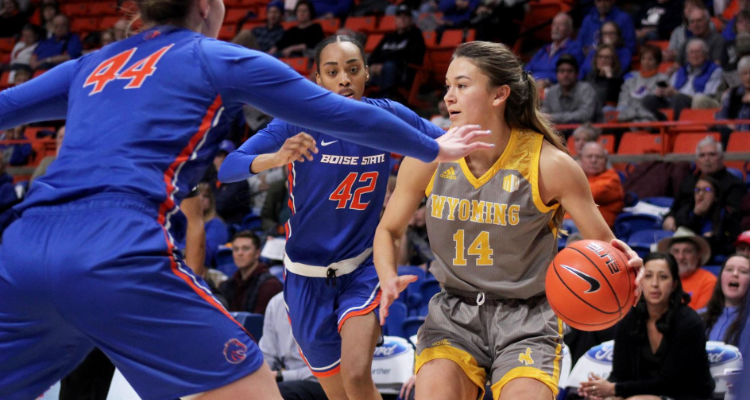 BOISE, Idaho – The Cowgirls had their three-game winning streak snapped by Boise State on Wednesday, as the Broncos (16-8, 8-5 MW) took a 67-48 win on their home court. The Cowgirls (11-10, 7-5 MW) had a season-high 24 turnovers on the night, and they struggled to find an offensive rhythm in the second half.

“They just got out after us,” said head coach Gerald Mattinson. “They pushed the ball out and switched us a lot. We were intimidated by their switch. They got out and pressured the wings on us. I give them credit. They came out and played like a team that is playing for something. They said, ‘we’re going to get out, get in your faces and see how you respond.’ And quite honestly, we didn’t respond well enough with 24 turnovers.”

The Cowgirls were led by freshman Jaeden Vaifanua, who scored a team-high 15 points on 6-of-8 shooting. She also had three rebounds and a steal on the game. Vaifanua has reached double-digit scoring in back-to-back games and for the fifth time this season.

Sophomore Tereza Vitulova scored 14 points on 5-of-8 shooting, including a perfect 2-of-2 from three-point range. Vitulova has now reached double-digit scoring in four straight games and 16 times this year. The Domasov, Czech Republic native had three rebounds for the Cowgirls.

The Broncos jumped out to a 9-2 lead to start the game, with Vitulova scoring for Wyoming. Vaifanua scored six straight for Wyoming, but BSU scored a three in the middle of her run. The Broncos hit a three to make it 15-8, and then scored six of the next seven points to take a 21-9 lead after one quarter.

Sophomore Quinn Weidemann scored a layup to kickstart a 10-0 run for the Cowgirls to start the quarter. The Broncos ended the run with a long jumper, but the Cowgirls cut the lead to 23-19 with 6:23 to go in the frame. After three more BSU points, Johnson scored four straight for Wyoming to make it 26-23 with 2:43 to play in the first half. However, the Broncos scored four more before the halftime buzzer to go up 30-23 at the half.

The Broncos scored a layup to start the third quarter, and Vitulova answered with a pull-up jumper at the free throw line. The teams traded points, and BSU led 37-30 with 6:17 to play in the quarter. The Cowgirls went the final 6:18 of the quarter without any points, and the Broncos took a 48-30 lead after three periods.

Rusk scored a free throw to start the final quarter. The teams traded points to a 52-35 Bronco lead. Vaifanua converted an old-fashioned three-point play to make it 58-41 with 2:31 to play.

The Cowgirls return to action on Saturday, Feb. 8, when they host New Mexico at 2 p.m. in the Arena-Auditorium. This will be the Cowgirls’ “Bounce Cancer” game.