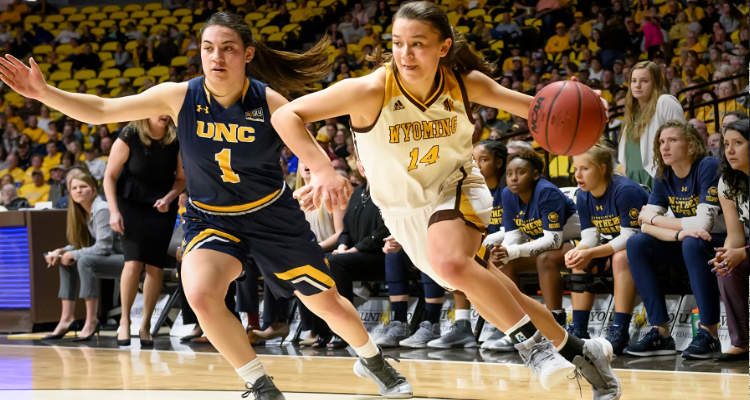 LARAMIE, WY. – The Cowgirls never trailed in their 68-60 victory over Northern Colorado (22-11) in the first round of the Women’s National Invitation Tournament on Thursday night. It is the 10th time this season that Wyoming (23-8) has never trailed during a game. The win over the Bears came on the six-year anniversary of the last two times the teams met, a WNIT game in 2013.

“As I told the team, all the teams that are playing are talented, used to winning and it’s going to be 40 minutes each and every night out that you have this opportunity,” said head coach Joe Legerski. “I thought tonight’s game was exactly that. Neither team wanted to give an inch. A three-point lead, or a four-point lead can evaporate in a hurry.”

The Cowgirls were led by senior Bailee Cotton’s impressive double-double, as the Denver, Colo., native scored 16 points and grabbed a career-high 16 rebounds. It is the eighth double-double of the season for Cotton, and the 13th of her career. She moved into a tie for 14th on the all-time double-double list, passing current Wyoming coach Fallon Lewis. Cotton added a game-high three blocks and a steal.

“Bailee is somebody who’s stated she does not want this team to end,” Legerski said. “She knows as long as we can find another win, this team can spend time together. I thought Bailee gave us a good start; she played composed. Her rebounding was really special. She played 38 minutes tonight, but it felt like we could not get her off the floor.”

Senior Sladjana Rakovic added 12 points and four rebounds off the bench, the fifth time this season she’s scored in double figures. Senior Marta Gomez and junior Taylor Rusk each added 11 points on the night. It’s the 28th time in double-figures this season for Gomez and the 14th for Rusk. Gomez also grabbed six rebounds and dished out three assists, while Rusk had four rebounds and tied her career high with two blocks.

Cotton opened the game’s scoring with a long straightaway jumper, but both offenses went cold, and the teams were tied at 4-4 with 4:51 to go in the first quarter. Freshmen Quinn Weidemann and Karla Erjavec drained back to back shots to kick-start a 9-2 run, highlighted by a Weidemann corner three that put the Cowgirls up 13-6. But the Bears made back-to-back threes, making it 13-12 for the Cowgirls. Tapia drove the lane and scored a layup at the buzzer to put UW up 15-12 after one quarter.

Rakovic subbed into the game and scored the first points of the second quarter on baseline drive to the basket. In fact, Rakovic scored Wyoming’s first six points of the quarter, before a Weidemann and-one play gave the Cowgirls a 24-17 lead at the 6:17 mark. Gomez ended a 2:19 Cowgirl scoring drought with a baseline jumper, but the Bears hit a three on their next possession to make it 26-24 for UW with 3:32 to play in the half. The Bears cut Wyoming’s lead to one, 28-27, but the Cowgirls scored the final five points of the half, and took a 33-27 lead into the locker room.

The Bears opened the second half’s scoring with a three from the right wing, and added a pair of free throws before Erjavec put the Cowgirls on the board with a driving layup. Gomez scored six straight for Wyoming to give the home team a 41-34 lead, forcing a Bears timeout at the 4:50 mark. Cotton ended an extended Cowgirl scoring drought with a pair of free throws, and The Cowgirls were up, 43-39, with 2:36 to go in the third frame. Rakovic scored in the paint, again, to end the quarter with Wyoming up 48-42.

Rusk drove the baseline to start the fourth quarter with a Cowgirl layup, and Cotton added a pair of free throws on the next possession. However, an 8-0 run by the Bears forced a Cowgirl timeout, leading 53-50 at the 6:15 mark. Rakovic ended a seven-minute stretch of no Cowgirl field goals with a layup, and the Cowgirls held a 59-53 lead with 2:05 to play. After a 4-0 Bears mini run, the Cowgirls scored five straight points to take the 64-57 lead with just 39 seconds to play.

The Bears shot 33.8 percent from the field, 33.3 percent from three and made three of their four free throws. Northern Colorado was led by Alexis Chapman’s 14 points, while Savannah Smith had a game-high seven assists.

The Cowgirls will face the winner of South Alabama and Lamar in the second round of the WNIT. That game will be on Sunday, March 24, at 2 p.m. (MT) in the Arena-Auditorium in Laramie.