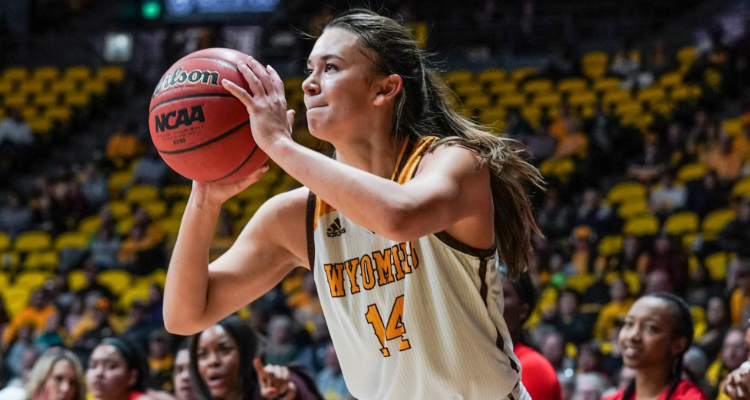 “With the loss on Wednesday, the message to the team was, we did what we wanted to do except win the game,” said head coach Joe Legerski. “We made the right plays, ended up being competitive throughout it and you can’t worry about winning and losing. I thought today, we did the same thing. We came out, played with a great deal of intensity. The competitiveness was there. Then, we made a few more plays. I thought our transition game was really good today. We were able to get up and down the floor, and we made the right decisions.”

Wyoming is now 12-4 under Legerski in home conference openers, and pushed its home winning streak over UNLV to six games.

The Cowgirls had a pair of players go for 20 points, as freshman Quinn Weidemann scored 24 points and senior Bailee Cotton poured in 20 of her own, including a pair of threes early in the game. Both totals are career highs for those Cowgirls. Weidemann converted seven three-point shots, which is tied for the third most in a single game in school history. Freshman Karla Erjavec scored 14 points and tied her career high with four assists.

“We go with the premise that there’s a good shot, a better shot and the best shot,” Legerski said. “I thought Quinn had the best shot all game long. Players were making plays. You take a look at it, we had 22 assists on 33 field goals. That’s finding people. I thought Bailee Cotton got us off to a great start tonight. Her two threes really stretched the floor, energized the crowd, excited our team, and we were able to build off what Bailee established.”

Junior Taylor Rusk did a little bit of everything for the Cowgirls, scoring 12 points to go along with a career-high eight assists, three rebounds and a steal. Senior Sladjana Rakovic paced the Cowgirls on the glass by snagging seven rebounds in just 12 minutes off the bench, while senior Clara Tapia finished the game with a season-high-tying five assists. Tapia has multiple assists in every game this season.

The Cowgirls scored 25 points off of 17 Lady Rebel turnovers, outscored UNLV in the paint, 30-22 and had the Cowgirl bench outscore UNLV’s 36-13.

The Lady Rebels were led by Katie Powell’s 20 points, while Paris Strawther scored 14 points and had a team-best six rebounds. Nikki Wheatley scored nine for the UNLV, while Latecia Smith had three assists to lead UNLV.

Cotton opened the scoring for the Cowgirls with a straightaway three pointer on their first possession. The teams traded baskets until a Rusk jumper gave Wyoming a 10-7 lead at the 5:52 mark. Tucker converted an and-one play, and then the Rebels ended a three-minute-plus scoring draught on the other end, as Wyoming took a 15-9 lead at the 4:06 mark. Cotton drained her second trey of the quarter, and the Lady Rebels called time at 2:45 trailing, 18-9. The Cowgirls ended the quarter on an 8-0 run, and held a 26-12 lead.

Gomez was fouled on a three point attempt to start the second frame, and she converted all three shots at the line. Rakovic checked in at the seven-minute mark and scored a driving layup to stretch the Cowgirl lead to 36-18. A Rusk three forced UNLV to call timeout, trailing 41-20 at the 5:46 mark. A Rusk layup pushed the lead to 51-23 with under two minutes left in the half. The Lady Rebels went on a short 7-3 run to end the half, but Wyoming took a 54-30 lead into the break. The 54 points is the highest scoring half, either first or second half, of the season for the Cowgirls.

Cotton and Gomez each scored buckets out of the break before the Lady Rebels got on the board with a free throw from Wheatley. Erjavec put the Cowgirls up by 30 with a corner three, 63-33, at the 5:22 mark of the third quarter. Bell hit a corner three for UNLV with 4:16 left in the third frame, and the Lady Rebels called timeout, trailing 65-38. The Cowgirls went nearly three minutes without a field goal, but the UNLV couldn’t close the gap. Cotton ended the drought with an and-one play that gave her 20 points in a game for the first time in her career. The Cowgirls took a 77-43 lead into the final quarter.

Freshman Tereza Vitulova started the scoring in the fourth frame with a layup, but UNLV scored the next eight. The teams then traded baskets, and the Cowgirls held an 87-55 lead with 4:30 remaining in the game. Vitulova scored a free throw to give Wyoming its 90th point with 1:20 left in the contest. The Lady Rebels added a few more free throws, and the Cowgirls took the 90-62 win.

The Cowgirls return to action on Wednesday, Jan. 9, when they host San Diego State at 6:30 p.m. in the Arena-Auditorium.