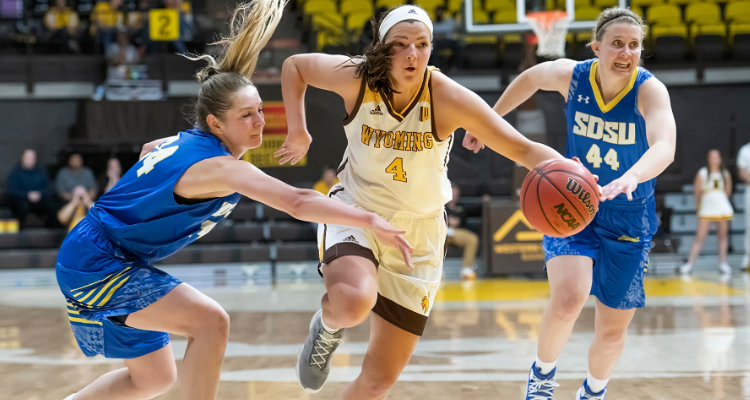 LARAMIE, WY. – The Cowgirls were clutch from the free throw line down the stretch to close out the South Dakota State Jackrabbits, 77-70. Wyoming was sent to the charity stripe three times in the final 50 seconds, and three different Cowgirls toed the line and sank both their free throws to keep South Dakota State’s comeback bid at bay.

“This team just comes out and competes each and every night,” said veteran head coach Joe Legerski. “One of the things we talked about at our pre-game today, is the reason we are having success is our veteran players are stepping up, and our freshman are stepping up. The point being made is, it’s not an individual that has to carry us. When we talk about our veteran players, tonight, Marta (Gomez) and Bailee (Cotton) played tremendously. I thought Taylor Rusk was big again tonight.”

Senior Marta Gomez had her third 20-point game of the season, pouring in 20 points on 6-of-13 shooting from the field, including a 4-of-9 showing from long range. Senior Bailee Cotton recorded her second double-double of the season with a 15-point, 10-rebound performance. The 10 rebounds were a game-high.

Junior Taylor Rusk added 13 points to tie her season high, and tied her career high with seven assists while committing no turnovers. In fact, the Cowgirls’ eight turnovers ties their season low. Freshman Quinn Weidemann poured in 13 points off the bench, and scored timely free throws in the final minute of the game. Senior Sladjana Rakovic, returning from an injury, played her first minutes of the season and recorded two assists and a steal.

“Then you look at our freshman, and Quinn (Weidemann) really stepped up,” Legerski said. “I thought there wasn’t a bigger play, I think it was an eight-point ball game, and Quinn drives right and hits a tough runner to just give us some confidence. Tereza (Vitulova) gave us a lift off the bench.”

The Jackrabbits (8-5) were led by Myah Selland’s 21 points, while reigning Summit League Player of the Year Macy Miller had 18 points, nine rebounds and five assists. Tagyn Larson and Madison Guebert round out SDSU’s double-digit scorers with 13 and 11 points, respectively.

Wyoming shot 42.6 percent (26-of-61) from the field, 40.0 percent (10-of-25) from three and 83.3 percent from the free throw line (15-of-18). The 15 made free throws are a season high for the Cowgirls. Wyoming also had 19 points off the bench, the most since the bench scored 61 against Colorado-Colorado Springs in UW’s third game of the season. Wyoming, one of nation’s most efficient ball-handling teams, had 15 assists and only eight turnovers.

“When you take a look at that bench, to have 19 points out of our bench, I think that’s the difference,” Legerski said. “This is something I can keep talking about collectively to them, that we’re more than one or two people. And yet, we need those one or two people to step up, but we need everyone contributing. That’s what I think tonight’s win was all about.”

Erjavec drove the lane to open the game’s scoring with a layup. A Gomez corner three tied the game at seven after the Jackrabbits put together an early lead. Gomez drained another three to put Wyoming up 12-9, but SDSU answered with a trey of their own. Rusk scored a driving layup to put the Cowgirls up 14-12 into the first media timeout, and Cotton went 2-of-2 from the line out of the break to push the Wyoming lead to four at the 4:00 mark of the first quarter. Miller added a free throw at the 1:35 mark to make the score 19-15 for Wyoming. Weidemann found Rusk for a three to answer, and the quarter ended with Wyoming leading 22-17.

The teams had trouble scoring to open the second quarter, as they missed their first six combined shots. But, Vitulova lifted the scoring lid with a post move to earn a layup, and after SDSU scored, Vitulova found the basket again.

After a stoppage for a bloody nose, Rakovic checked in for the first time this season and collected an assist on a Cotton jumper that pushed Wyoming’s lead to 28-21 at the 4:28 mark. The Cowgirls used a nearly four-minute SDSU scoring drought to run their lead up to 33-21 at the 1:40 mark before Miller completed a three-point play. The half ended with Wyoming holding a 35-24 lead. The 24 points are a season-low in the first half for the Jackrabbits.

After a missed three-pointer, SDSU’s Larson collected an offensive rebound and scored a layup to begin the second half. The Cowgirls answered with a Rusk three-ball, and Cotton scored on a jump-hook in the paint to push the lead to 40-26 at the 7:44 mark. South Dakota State then called timeout after a Jackrabbit layup made it 42-30 with 6:49 remaining in the third frame. Out of the stoppage, Cotton hit the first three-pointer of her career, but SDSU sank a three on their end to respond.

After Weidemann drained a three, Miller stopped the clock and earned a pair of free throws cutting Wyoming’s lead to 11, 51-40, at the 2:09 mark. A Guebert three-pointer brought the Jackrabbits back within single-digits, 43-52 with 1:51 left in the third quarter. Vitulova buried a turnaround hook shot in the paint in the final minute, and the quarter ended with Wyoming leading 58-45.

The Cowgirls opened the fourth quarter with back-to-back threes from Gomez and Rusk, and after a Miller layup, SDSU called timeout with 9:07 remaining in the game and Wyoming leading, 64-47. Rusk broke a three-minute Cowgirl scoring drought with a driving layup at the 4:02 mark, and Wyoming went up 68-54. With the Cowgirls in a stretch of going just 1-of-7 from the field, Wyoming called timeout with 2:23 left in the game, leading 68-58.

Weidemann converted a driving floater out of the timeout, but Selland responded with a layup of her own. With 1:03 remaining in the game, Miller scored two at the free throw line, and the Jackrabbits called time trailing by eight, 70-62.

While attempting to get open on the inbound play, Cotton was called for an unsportsmanlike foul, and SDSU shot two free throws, got the ball back and scored a layup to make it a four-point game, 70-66. The Jackrabbits fouled Tapia, who went 1-of-2 at the line. Cotton collected a Jackrabbit miss and was fouled. She converted both shots, and SDSU called a timeout with 31.8 second remaining and Wyoming holding a 73-66 lead. After an SDSU layup, Gomez was fouled and went perfect from the charity stripe. Weidemann collected a Jackrabbit miss and went to the line where she converted both shots. Wyoming gave up a layup, but the Jackrabbits conceded the game with about 10 seconds remaining, allowing the Cowgirls to dribble out the clock. The Cowgirls walked off the court with a 77-70 victory over South Dakota State.

Wyoming returns to the courts on Wednesday, Jan. 2, when they travel to Idaho to face Boise State in both team’s Mountain West opener. Tip-off inside Taco Bell Arena is scheduled for 7 p.m. (MT).