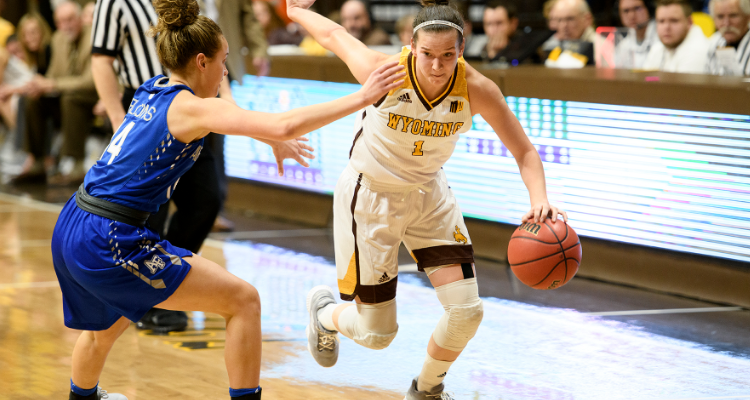 LARAMIE, WY. – Five Cowgirls scored in double figures, and the team tied the sixth-best shooting percentage in school history as Wyoming (13-5, 6-3 MW) grounded the Falcons (8-14, 4-7) by a final score of 80-60. The Cowgirls improved to 27-0 against Air Force in games played in Laramie.

“The games are always interesting to me,” said head coach Joe Legerski, who was honored for his 300th career win prior to the game. “This was as difficult a victory, and when you look at the score, there was nothing easy about this win. I thought Air Force came out in the third quarter, and to their credit, really took the basketball at us. We started standing around playing side-to-side, and it just seemed like we really didn’t get a whole lot going offensively. The lead goes quickly from 17 to about 10, and I thought all the momentum was with them. We made a change to get a few more aggressive players in the game ourselves, and I thought Sladjana’s drive, basket and foul was a big play when we needed one.”

The Cowgirls had five reach double figure scoring, led by senior Bailee Cotton’s fifth double-double of the season with 19 points and a game-high 10 rebounds. Cotton was also a force on defense, recording two blocks and a steal. Senior Marta Gomez added 15 points and five boards, and fellow senior Sladjana Rakovic tied her career high with 13 points off the bench.

Junior Taylor Rusk scored 11 points and dished out six assists, while freshman Tereza Vitulova scored 10 points off the bench on a perfect 4-of-4 shooting to go along with five rebounds.

Freshman Karla Erjavec dished out a game- and career-high 10 assists, and she’s the first Cowgirl to reach double-digit assists since Clara Tapia had 10 against San Diego State on Feb. 1, 2017. Erjavec also added six points, four rebounds and steal to show off her all-around game.

“You take a look at her, and the fans showed how much they appreciate the way Karla plays,” Legerski said. “She got us going in transition, and she has great vision of where to take the basketball. For her to have 10 assists, I take that as a minimum of 20 points… and for her to score six, you look at that and she had basically a third of our points tonight she was the direct result of. I like the ball in her hands, she makes good decisions and she always wants to learn.”

The Cowgirls shot 62.5 percent (35-of-56) from the field to tie the sixth-best shooting performance in a game in school history. Wyoming also shot 42.9 percent (3-of-7) from three and 63.6 percent (7-of-11) from the free throw line. The Cowgirls ended the game with a season-high 27 assists – the sixth time this season they had at least 20 assists – and 15 turnovers.

The Cowgirls had a season-high 50 points in the paint, and the bench outscored AF’s reserves, 25-8. This game also marked the first time in four games the Cowgirls have trailed, but the Falcons only led for 2:08 during the contest.

Air Force was led by Briana Autrey, who had a game-high 21 points and added three assists. Kaelin Immel joined her in double-figure scoring with 12 points. Emily Conroe added nine points, including Air Force’s only three-point field goal on the night.

Cotton opened the game’s scoring with a spinning layup in the post that the Falcons answered. In fact, there wasn’t a missed field goal in the game until Cotton barely missed a layup at the 7:03 mark, and Air Force had an early 8-7 lead. But the Cowgirls turned it on after the media timeout, and Wyoming ended the quarter on a 15-2 run, highlighted by a pair of dazzling fastbreak assists by Erjavec – two of six assists she had in the quarter. The Cowgirls led 26-14 after the opening frame.

Tapia attacked the rim to start the scoring in the second quarter, extending the Cowgirl lead to 28-14. After a pair of Falcon free throws, the Cowgirls rattled off an 8-0 run, capped by a Rakovic three-ball, to force an Air Force timeout with Wyoming leading, 36-16, at the 8:31 mark. Then, the Falcons slightly outscored Wyoming, 13-10, to end the half, and the Cowgirls took a 46-29 lead into the locker room at the break.

Air Force started the second half with the ball, and scored a layup to start a 6-0 run that was halted by a pair of Cotton free throws to keep Wyoming up, 48-35, at the 6:00 mark. Rakovic hit an elbow jumper at the 2:52 mark to put Wyoming up 54-40, and Vitulova scored on the next possession after a defensive stop. The teams traded points to end the quarter, and the Cowgirls led, 60-46, after three periods.

Erjavec buried a baseline jumper to start the fourth quarter. Gomez later ended a 2:30 scoring drought with a baseline jumper from the other side of the basket, to put Wyoming up 66-50. Out of the media timeout, Erjavec found Gomez for a layup – Erjavec’s 10th assist on the night – and Erjavec scored a fastbreak layup after a defensive stop to force a Falcon timeout at the 3:53 mark with The Cowgirls leading, 74-52. The teams traded baskets, and Vitulova scored the final four points for the Cowgirls down the stretch as Wyoming walked away with the 80-60 win.

The Cowgirls return to the hardwood for the first edition of this season’s Border War, when they travel to Fort Collins to face Colorado State on Saturday, Feb. 9. Tip-off from Moby Arena is scheduled for 2 p.m. (MT).