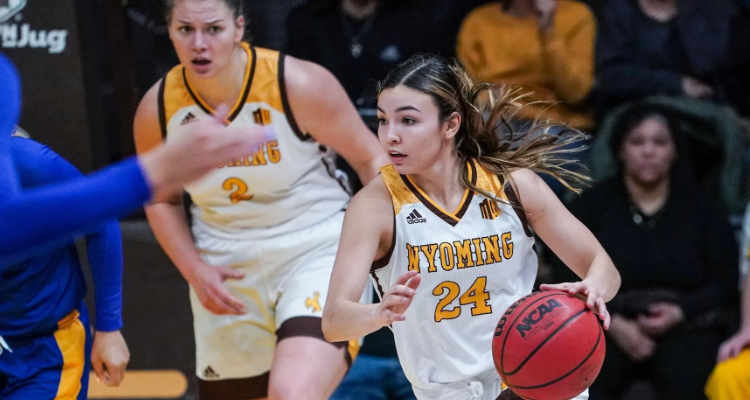 LARAMIE, Wyo. – The Wyoming Cowgirls used an up-tempo offense and stifling defense to shock San José State, the Mountain West’s leading offensive team, for an 80-45 victory on Saturday afternoon. Wyoming (11-9, 7-4 WM) outscored the Spartans (15-7, 9-2 MW) by a margin of 14-0 on the fastbreak and 13-0 on second-chance opportunities.

“I thought it was a great defensive performance,” said head coach Gerald Mattinson. “I have to give credit to my staff. They did a great job looking at a bunch of film and gave us a chance to look at some things that we wanted to try. We didn’t know if it would work, and you never do, but it did. Then I give credit to our team, to all of them. Everybody had to come out for two days and practice and do something different that they’re not used to. They did it, it helped us and today we executed it. I thought out defense today was outstanding.”

Sophomore guard Tommi Olson stole the show for the second game in a row, both of which are her first two career starts. She scored four points, but had a game-high 12 rebounds, a game-high six assists with zero turnovers and a game-high seven steals. The rebounds and steals are career highs. The seven steals are also tied for the fifth-most in a game in Cowgirl history. She also added a blocked shot for good measure.

“I didn’t know Tommi was that close to a triple-double without scoring the double-digit points,” Mattinson said. “Tommi’s taken advantage of the situation that she has with Karla (Erjavec) being ill. What we’ve had to do is, we’ve freed the ball up a bit. We’re going to take advantage of what she brings.”

Freshman Jaeden Vaifanua came off the bench and scored a career-high 20 points on an extremely efficient 8-of-10 shooting. She pulled down five rebounds and had a block on the defensive end. She’s the third Cowgirl this year to score at least 20 points in a game, joining sophomore Tereza Vitulova and freshman McKinley Bradshaw.

Sophomore Quinn Weidemann scored 14 points for the Cowgirls and had five assists with zero turnovers. Those five assists are a career-high for a single game for the Omaha, Neb., native. Weidemann also had three rebounds and a pair of steals, defensively. The 14 points are the most for Weidemann since scoring 19 against Boise State earlier this season.

Sophomore Selale Kepenc scored a season-high 12 points – her first time reaching double-figures this season. She was just three points off her career high, set two seasons ago against New Mexico. She also tied her career high with six rebounds. The Istanbul, Turkey, native added an assist, as well.

“I thought Selale played very well,” Mattinson said. “Selale had her best game of the year. It could be a breakout game.”

The 45 points for San José State are a season low, as the previous season low was 56 points against BYU. The Cowgirls outscored the Spartans 54-18 in the paint, 23-2 off turnovers and 41-18 in bench production.

Wyoming had 19 assists and 11 turnovers for the game. The Cowgirls have had double-digit assists in seven-consecutive games.

Sophomore Tereza Vitulova scored a layup to start the second frame, and Olson went coast-to-coast after a steal to make it 17-9 for the Cowgirls. The Spartans stopped the run with a three, and the teams traded scores until Sanchez Ramos made it 23-16 with a layup.

After a Spartan three, the Cowgirls scored 13 straight, including a pair of fastbreak layups by Rusk off impressive feeds from Olson. The Spartans ended the run with a layup at the buzzer, but the Cowgirls held a 36-21 lead at the halftime break. The 21 points are the fewest the Spartans have scored in any game this season.

Vitulova scored on the block to start the second half, and Vaifanua scored again for the Cowgirls to make it 40-21 with 7:20 to play in the quarter. Rusk and Weidemann combined for four points, but the Spartans scored five straight.

Then, Kepenc, Vaifanua and Weidemann scored seven straight to force a Spartan timeout with UW leading 51-28 at the 1:09 mark. Out of the break, the Spartans made a three, but Weidemann scored a pair of free throws to make it 53-31 after three quarters.

San José State scored two free throws to start the fourth quarter, but Vaifanua answered with a layup, followed by an Olson steal and acrobatic bucket. Then, SJSU used a 6-0 run to make it 57-38 for Wyoming, but Weidemann ended the run with a corner three. The Cowgirls then used a 14-2 run to make it 74-41 with 2:26 to play. The teams traded scores to end the game, and the Cowgirls dribbled out the 80-45 win.

The Spartans shot 32.7 percent (17-52) from the field – their second-worst shooting performance of the season, 33.3 percent (5-15) from three and went a perfect 6-of-6 from the free throw line. San José State had eight assists and 21 turnovers for the game.

Ayzhiana Basallo entered the game averaging a Mountain West-leading 21.2 points per game, but was held to just 11 on 3-of-12 shooting. Cydni Lewis had 13 points and eight rebounds for the Spartans.

The Cowgirls are back in action on Wednesday, Feb. 5, when they travel to face Boise State