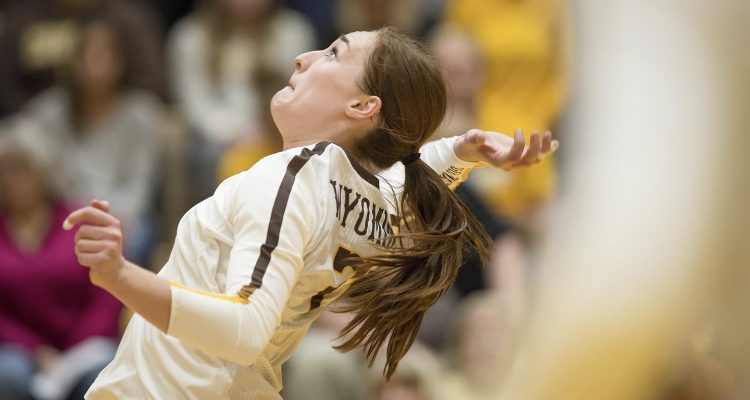 LOGAN, UT. – The Wyoming volleyball team posted an impressive sweep over Utah State to close out its final road trip of the conference season.

The Cowgirls (18-10, 10-6 MW) were led by Tara Traphagan, who racked up 10 kills on a .529 hitting percentage. As a team, Wyoming hit a .326 percentage—the team’s highest in a road match this season. Setters Cori Aafedt and Marissa Hines both recorded 17 assists in the win as well.

Defensively, Wyoming recorded 10 total blocks, led by Reed Copeland with eight and Faith Waitsman with seven. Libero Jaiden Chase led in digs with 13 to pace the Cowgirls’ 42 as a team.

The Cowgirls got off to a nice start with a 25-22 win in the first set, thanks in part to four kills and four blocks from Faith Waitsman, as well as four blocks from Reed Copeland. Wyoming hit .314 in the frame, while holding the Aggies to a .184 clip with eight errors—six caused by Cowgirl blocks.

The second set was all Cowgirls, as Wyoming dominated with a 25-12 set win to expand its lead in the match to 2-0. The Pokes recorded a .400 hitting percentage while helping force 11 Utah State errors to hold the Aggies to a -.226 percentage. Utah State opened with a 2-0 lead, but a 9-2 run for the Brown and Gold gave Wyoming the lead for good.

Utah State wouldn’t go away quietly, as the Aggies got out to a 5-1 lead to open the third set; however, the Cowgirls went on a 6-1 run to seize an 8-6 lead. Utah State would tie it back up at 8-all and again at 21-all, but would never regain the lead. Wyoming won four of the final five points in the match to take the third, 25-22, and close out the match.

The Cowgirls will close out the regular season next weekend with a pair of home matches at the UniWyo Sports Complex. Wyoming will face New Mexico on Thursday at 6:30 p.m. before returning on Sunday to host UNLV at 7 p.m.