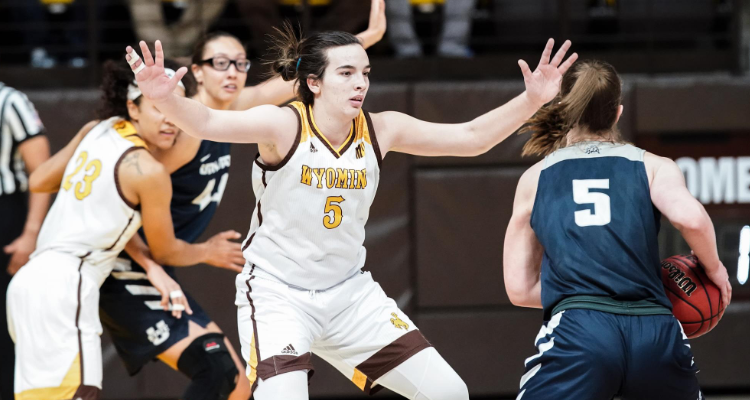 “You have to find a number of ways to win, and I think this team is starting to figure that out,” said head coach Joe Legerski. “Whether that’s with three-point shooting, whether it’s taking the ball inside, or in tonight’s game, where defense was played very tough by both teams with a very low-scoring first half, we had to try to get our players to relax a little bit.”

She wasn’t the leading scorer on the night, but senior Sladjana Rakovic made a big impact on the game with her season-high 10 rebounds to go with seven points off the bench. Additionally, Rakovic, along with classmate Bailee Cotton, kept the Mountain West’s third-leading scorer, Shannon Dufficy, to her first game this season with zero points.

“Sladjana really stepped up for us tonight,” Legerski said. “We had Bailee in foul trouble, Sladjana came in and ended up getting 10 rebounds. She went 3-of-8 with seven points with her three pointer.”

Senior Marta Gomez was the game’s leading scorer, as she poured in 17 points for the seventh-straight game with at least 15 points. She went a perfect 10-of-10 at the free throw line – a career-high in makes from the charity stripe.

Cotton added nine points and six boards, while freshman Karla Erjavec scored seven points and had a game-high six assists. It’s the third game in a row for the Croatia native with at least six assists.

Wyoming had 11 assists to seven turnovers, the first time in eight games the Cowgirls had single-digit turnovers.

The Aggies shot 32.6 percent (15-of-46) from the field, 0.0 percent (0-for-8) from three and 62.5 percent (5-of-8) from the free throw line. Utah State is the second Cowgirl opponent to not make any three-point field goals, joining Chadron State’s 0-for-10 performance in the season-opener. The Aggies had 3 assists and 12 turnovers.

Tapia converted a pull-up jumper from the elbow to open the game’s scoring, and Erjavec scored a layup following a Rusk steal to put the Cowgirls up 4-0 early. But the Cowgirls entered a three-minute scoring drought, and the Aggies used a 6-0 run to take a 10-8 lead. Gomez ended the run with a straight-away three, and Wyoming end the first quarter up 11-10.

A running bank shot by USU’s Olivia West started the scoring in the second frame, but Erjavec scored a pair of free throws to regain the lead at the 6:42 mark. Bassett ended a five-minute scoreless stretch for the Aggies, and after the Cowgirls went over three minutes without any points, the USU took back the lead, 16-15 at the 1:15 mark.

Erjavec ended the Cowgirl drought with a pair of free throws, but Bassett scored a long jumper with 28 seconds left in the half. After a Rusk miss, Gomez corralled the rebound and beat the buzzer with an elbow jumper, and the Cowgirls went into the locker room up, 19-18. The only other game the Cowgirls failed to score at least 20 points in a half was the first half of the game in Logan earlier this year.

The Aggies finally opened the scoring in the second half more than two minutes in, and Cotton answered with a long jumper at the 6:51 mark. After an Aggie basket, Erjavec and Cotton worked the pick-and-roll to regain the lead, 23-22, at the 5:48 mark. Freshman Quinn Weidemann ended a 2:00 scoring drought with pair of free throws, and Cotton added another free throw on the next possession.

The Cowgirls’ final six points of the quarter came at the free throw line, and Wyoming had a 32-26 lead heading into the final frame.

Tapia drained a three from the near wing to start the fourth quarter, and after a defensive stop, Gomez dropped in a pair of free throws to give Wyoming its biggest lead of the game, 37-26, at the 8:00 mark. Brewster finally scored for Utah State at the 6:07 mark, but Gomez preserved the 13-point lead with a layup at the 5:51 mark.

Rakovic had a nice stretch where she drained a three and then drew a charge on the defensive end. Utah State’s bench was issued a technical foul, and Gomez converted both shots. Another technical foul was issued later, and Gomez again stepped to the line and scored both. The Aggies ended a 12-0 Cowgirl run with a jumper in the paint, but Utah State still held a 51-30 lead at the 3:02 mark. The teams traded baskets down the stretch, and Wyoming walked away with the 53-35 victory.

The Cowgirls return to the hardwood on Saturday, Feb. 16, when they travel to face Nevada. Tip-off in that contest is slated for 3 p.m. (MT).