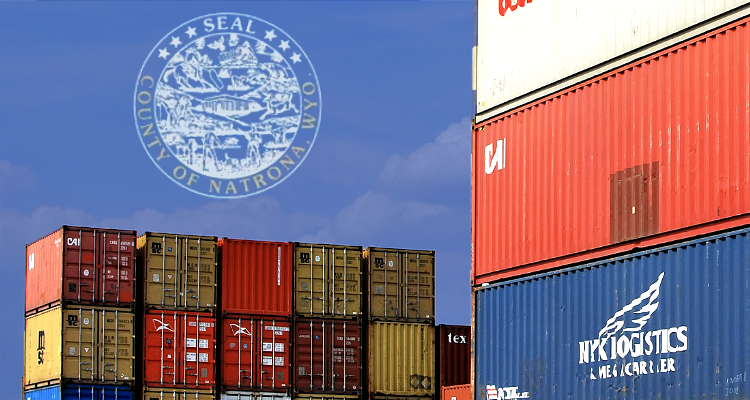 Natrona County, WY. | Baylie Evans    –     The state of Wyoming now has an additional lure for companies, jobs and industries to stay in or relocate to Wyoming: an expanded Foreign Trade Zone that covers almost the entirety of Natrona County.

Within an FTZ, companies can defer, reduce or avoid paying federal duties (taxes) they would otherwise have to pay on raw materials or components shipped in from foreign countries. Rather than paying immediately upon arrival, companies within an FTZ only pay duties when the foreign product is sold in the United States, if it ever is.

The Casper/Natrona County International Airport director, Glenn Januska, applied for the expanded zone about 18 months ago to offer that benefit to more companies.

To explain how it works, Januska used the hypothetical example of a bicycle manufacturer. If that manufacturer, operating outside of an FTZ, imports bike frames from Canada, hypothetically it would pay a five percent duty on those frames as soon as they arrive on U.S. soil. But within an FTZ, the manufacturer wouldn’t need to pay that duty until the frames – or the bikes built on the frames – were sold within the U.S. If the bikes were sold outside of the U.S., say to Mexico or back to Canada, the manufacturer would avoid paying the duty on those frames altogether. Additionally, if there is a difference in duty costs between the component (the frame) and the final product (the bike), the manufacturer can choose to pay the lower of the two.

Further, the duty deferment only affects federal taxes; it does not affect local or state taxes.

So, while the feds may be out some money, “that economic benefit from being able to support local business is more important than the duties,” Januska said.

In 1989, the FTZ was set up at the airport and later expanded to the Casper Logistics Hub, but they generally haven’t been used by businesses. That’s because the land has been owned by the airport, explained Charles Walsh, the president and CEO of the Casper Area Economic Development Alliance. Business owners and investors are reluctant to make improvements on somebody else’s land.

It may seem like a relatively small benefit, but for companies heavily involved in importing and exporting, it adds up; and it may very well tip the scales in Wyoming’s favor as companies are considering where to locate, Walsh said. The FTZ expansion, referred to as the Alternative Site Framework, extends the FTZ to most of Natrona County, which will allow companies to save some money on their operations while hiring, investing and spending money in Wyoming.

Marko Ruble is the managing partner of A&R Trading, LLC, an import/export brokerage with offices in Cody, Missoula, Mont., and Yangon, Burma. He was part of the team that worked to make this change happen in Natrona County.

“When we began revitalizing this Foreign Trade Zone, we discovered a real diamond in the rough,” he said. “We believe FTZ 157 can be a Wyoming company’s doorstep to a world of more cost-effective sourcing options for their operations, or secure storage facilities for their supply chains.”

Although it was a lot of work and a long wait to get to this point, the timing is working out perfectly, Ruble added, as the federal government is now starting to enforce new, higher tariffs on foreign goods.

“FTZs are not widely understood, so we invite anyone interested in learning more about the program to contact us,” Ruble said.

The next step is to approach companies that may benefit from this expanded zone and work with them through the application process, Januska said, which has been significantly shortened thanks to this change.