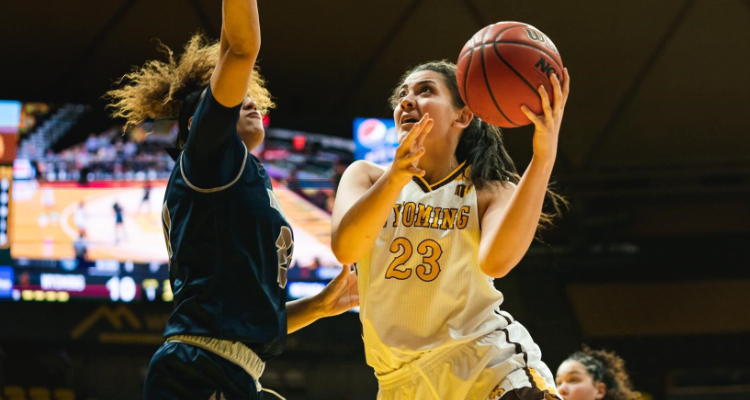 “I have to give credit to my staff, they came up with a great game plan,” said head coach Gerald Mattinson. “We went over it, reviewed it and we took some chances. What we did well, was we funneled people into areas we wanted to funnel them into, and it provided a lot of help and created tough shots. Just as importantly, we really controlled the defensive boards in the first half.”

The Cowgirls outrebounded the Wolf Pack by a final margin of 45-26, and Wyoming had 33 defensive rebounds. Freshman Jaeden Vaifanua was the top rebounder for Wyoming with seven boards, and had a game-high 17 points to go along with her effort on the glass. She was just short of her career high of 18 points set against Mississippi Valley State. This is the third time this season Vaifanua has scored at least 10 points in a game.

Fellow freshman McKinley Bradshaw scored 14 points for the Cowgirls on an extremely efficient shooting night, going 3-of-5 from the field, 1-of-1 from three and 7-of-9 from the free throw line. The seven made free throws are a career high. This is the third time this season Bradshaw has reached double-figure scoring. The freshman scored more against the Wolf Pack than she had in the previous six games combined, as the Lyman native shot her way out of a small slump. Bradshaw also pulled down six rebounds and had a career-high-tying two rebounds.

Sophomore Alba Sanchez Ramos scored 11 points on 5-of-6 shooting, as she also ended a mini-slump, scoring only 12 points in the previous three games. Sanchez Ramos has now reached double-figure scoring four times this season. The native of Madrid, Spain, also pulled down five rebounds and had an assist and a blocked shot.

Redshirt Selale Kepenc was dangerous from three-point range, as she scored nine points from beyond the arc to set a new season high for scoring. Kepenc had five rebounds for Wyoming.

The trio of senior Taylor Rusk, sophomore Tereza Vitulova and sophomore Karla Erjavec each scored eight points on the night to help balance out Wyoming’s scoring.

Wyoming had 46 bench points against Nevada, the second-most in a game this season for the Cowgirls behind the 57 against Mississippi Valley State. The Cowgirl bench helped make sure no Cowgirl had to play more than 24 minutes.

“When we win, when we play well and when we score points, our bench contributes,” Mattinson said. “They hadn’t been the last couple games. They stepped up tonight. What’s really good about their points, is they were significant points.”

Vitulova opened the game’s scoring by driving to the right for a layup, and the Cowgirls jumped out to a 6-0 lead before the Wolf Pack scored a layup with 5:21 to play in the quarter. Vaifanua scored four straight, and the Cowgirls took a 10-2 lead into the media timeout at the 4:06 mark.

After two Nevada free throws, Wyoming went on a 9-0 run capped by a fast break three from Selale Kepenc to go up 19-4 with 2:19 to play in the frame, forcing a Nevada timeout. The Wolf Pack stopped the run with a pair of free throws, but Bradshaw scored twice from the line to answer, putting UW up 21-6 after one.

Rusk scored a jumper on the right side to start the second quarter, and Nevada answered with a pair of free throws. The teams traded jumpers until an Erjavec three made it 30-12 for Wyoming with 5:44 to play in the half.

Bradshaw and Sanchez Ramos converted old-fashioned three-point plays on back-to-back possessions to put UW up 38-14 with 3:08 to go in the half. Nevada ended the run with a trey from the left wing, but Kepenc hit back-to-back threes before Vaifanua hit a pair of free throws to put UW up 46-17 at the break. It was the fifth 40-point half for the Cowgirls this season.

Erjavec drained a three to start the third quarter. The squads traded baskets until a Nevada basket made it 55-25 for UW with 6:21 to play in the frame. After a Wolf Pack three, Rusk and sophomore Tommi Olson scored back-to-back layups to push the lead back to 59-28 with 4:50 to play in the third.

The teams kept their hot shooting going, and after a Bradshaw layup, the Cowgirls called time leading 64-35 at the 2:30 mark of the third quarter. The Wolf Pack added a pair of free throws, while the Cowgirls cored three from a layup and a free throw, and UW held a 67-37 lead after three quarters.

Nevada struck first in the final quarter, and Sanchez Ramos scored a layup of her own on the next possession. Bradshaw got to the line after an offensive rebound and put the Cowgirls up 72-42 with 6:51 to play. Erjavec ended a small Nevada run with a baseline jumper, and Bradshaw scored two from the charity stripe to make it 76-47 for Wyoming with 3:47 to play.

The Cowgirls return to action on Saturday, Jan. 18, when they travel back to California to face Fresno State at 3 p.m.