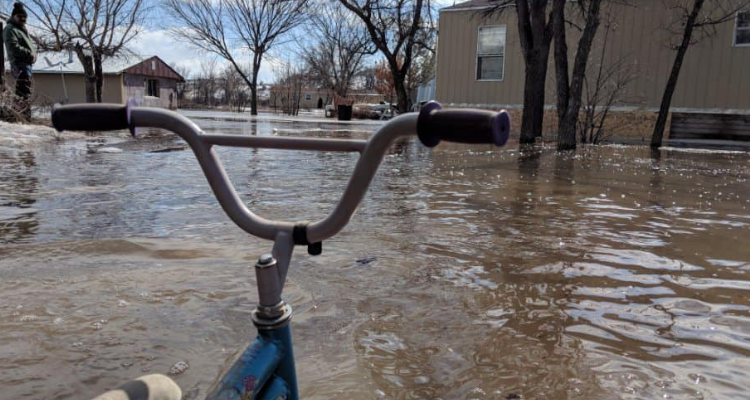 PINE RIDGE, SD. | By BLAKE NICHOLSON, (AP) – Flooding that has hit parts of the Midwest hard has nearly paralyzed an American Indian reservation in southern South Dakota, swamping roads, trapping people in homes and cutting off water supplies to thousands.

The situation on the sprawling Pine Ridge Reservation was improving Tuesday, but two weeks of severe flooding could put the Oglala Sioux tribe in recovery mode for months, if not longer, and deal a serious blow to its economy, President Julian Bear Runner said.

“This is going to have a devastating effect on us, I feel,” he said. “The tribe is utilizing any and all of its resources to try to help the communities that have been impacted.”

The prairie reservation is roughly the size of Delaware and Rhode Island combined and is home to nearly 20,000 people, about half living in poverty, according to U.S. Census Bureau statistics. Heavy snowfall and a rapid melt this month led to overland flooding, swollen creeks and rivers, swamped roads and broken water lines.

“Pine Ridge is like a desert when it comes to resources,” said Peri Pourier, a tribal member and state representative. “We’re using horses to get out to communities that are away from the main roads. We have elders out there that are just isolated.”

Bear Runner, 33, said it’s the worst flooding he has seen and that some tribal elders say they haven’t seen so much water since they were children. He said the tribe was still on the “borderline” of emergency Tuesday with floodwaters receding, but many tribal members still don’t have easy access “to pharmacies, medication, grocery stores, anything to help sustain themselves.”

The tribe estimates as many as 8,000 people have had water supplies disrupted and another 2,000 have been hampered or trapped by floodwaters. Three people who suffered medical problems died before ambulances slowed by floodwaters could get to them, the tribe said, though it released no other details.

Gov. Kristi Noem sent National Guard soldiers to the reservation over the weekend to help distribute drinking water after floodwaters washed out a rural waterline. The state also sent a water rescue team to help move some tribal residents from isolated homes.

The soldiers ended their work Monday after the water line was repaired and water service restored. They distributed about 9,500 gallons of water in seven communities.

The federal Bureau of Indian Affairs also has provided manpower and equipment. The agency didn’t immediately respond to a request for comment on its efforts.

Bear Runner said the tribe hasn’t had time to estimate the amount of damage or detail what repairs will be needed.

“I’m hoping if the state and federal government help out to the best of their abilities in assisting us, I suppose we can have this (recovery) done in a matter of months,” he said. “But without necessary equipment, if we have to do it on our own, it could take up to a year.”

Also Tuesday, the U.S. Environmental Protection Agency issued a statement saying it’s assessing two Superfund sites in states affected by the flooding. The EPA identified the Superfund sites as the Nebraska Ordnance Plant in Mead, Nebraska, and the Conservation Chemical Corporation in Kansas City, Missouri. Superfund is a law that gives the EPA funding and authority to clean up contaminated sites.

The Mead site operated as a munitions plant from 1942 to 1956 and its disposal of radioactive waste and other chemicals led to groundwater contamination. The EPA said it has not found evidence that any hazardous contaminants were released by the flooding.

The federal agency added that it will evaluate the sites further as floodwaters recede.

Elsewhere in the flood-fighting Midwest , levees shored up by sandbags were keeping the surging Missouri River at bay east of Kansas City. About 140 volunteers were sandbagging to protect a school in Norborne, Missouri. The Mississippi River was expected to flood some parks and railroad tracks as it crested Tuesday in Hannibal, Missouri.

Flooding along the Missouri River and its tributaries has caused at least $3 billion in damage and contributed to at least three deaths. Floodwaters are receding but the National Weather Service forecast says significant rain is possible later in the week.

To the north, Minnesota Gov. Tim Walz on Tuesday said people should be on guard for localized flooding but that ideal snowmelt conditions have lessened fears of catastrophic flooding.

“I don’t want anybody to let their guard down (but) when it comes to the actual boots on the ground and the organization, very confident,” Walz said of flood preparations.

The weather service is expecting moderate to major flooding in the Red River Basin of northwestern Minnesota and eastern North Dakota, and sandbag-filling efforts are underway in the Fargo-Moorhead metro area. However, the two cities have implemented significant flood-fighting measures in the last decade.

“If we had the same water levels (in Moorhead) that we had back in 2011, we would need (3 million) sandbags today to protect that critical infrastructure,” Walz said. “We need a little over 100,000 now.”