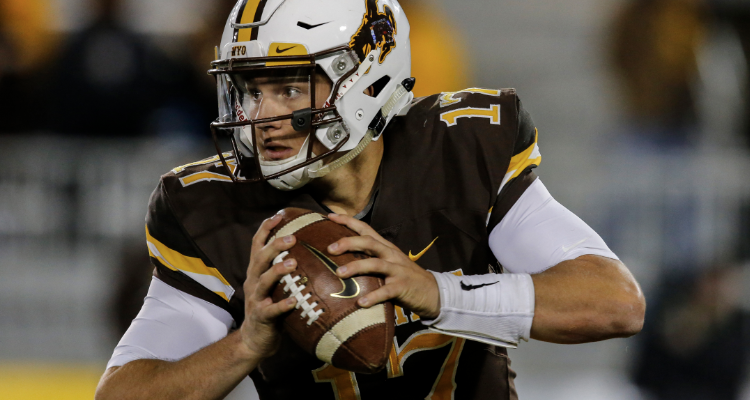 Laramie, WY.  –  On Wednesday, former University of Wyoming quarterback Josh Allen accepted an invitation to play in this year’s Senior Bowl to be played in Mobile, Ala., on Saturday, Jan. 27. The game will be televised on NFL Network and is scheduled to kick off at 12:30 p.m., Mountain Time. ESPNU and NFL Network will broadcast practices from the Senior Bowl week, which will run Jan. 23-27.
Allen, who just graduated in December after completing his junior season at Wyoming in 2017, declared for the 2018 NFL Draft immediately after leading the Wyoming Cowboys to a 37-14 victory in the 2017 Famous Idaho Potato Bowl. He is rated as one of this year’s top quarterback prospects by numerous NFL draft experts. He is eligible to play in the Senior Bowl by virtue of completing his degree in social science from UW this past December.
A native of Firebaugh, Calif., Allen led the Cowboys to an 8-5 record in 2017 and a victory in the Famous Idaho Potato Bowl. As a redshirt sophomore in 2016, he guided the Cowboys to an 8-6 record, a spot in the 2016 Mountain West Conference Championship Game and a berth in the 2016 San Diego County Credit Union Poinsettia Bowl. He also led the Cowboys to wins over two Top 25 teams in the 2016 season.
Allen was named to numerous college football award watch lists this past season, including the Davey O’Brien Award Watch List, Manning Award Watch List, Maxwell Award Watch List and Walter Camp Award Watch List. Allen was invited to and attended the Manning Passing Academy in the summer of 2017.
In his two seasons as Wyoming’s starting quarterback, Allen accounted for 5,833 yards of total offense and was responsible for 57 touchdowns passing, rushing and receiving. He ended his Wyoming career with 5,066 passing yards and 44 TD passes. He also rushed for 767 yards during his college career and scored 12 rushing touchdowns.
He will be the 26th Cowboy to play in the Senior Bowl. Eddie “Boom Boom” Talboom was the first Wyoming Cowboy to play in the Senior Bowl back in 1951. The most recent Cowboys to play in the Senior Bowl were wide receiver Robert Herron and defensive back Marqueston Huff, who both played in the 2014 Senior Bowl.
At the time of Allen’s acceptance of his invitation to this year’s Senior Bowl, he became the eighth and final quarterback on the 2018 Senior Bowl rosters. The other seven QBs who have accepted invitations are: Baker Mayfield of Oklahoma, Mason Rudolph of Oklahoma State, Luke Falk of Washington State, Kurt Benkert of Virginia, Kyle Lauletta of Richmond, Brandon Silvers of Troy and Mike White of Western Kentucky.
The coaching staffs of the Denver Broncos (North) and Houston Texans (South) will coach this year’s Senior Bowl teams.
More information on this year’s Senior Bowl may be found at: https://www.seniorbowl.com/