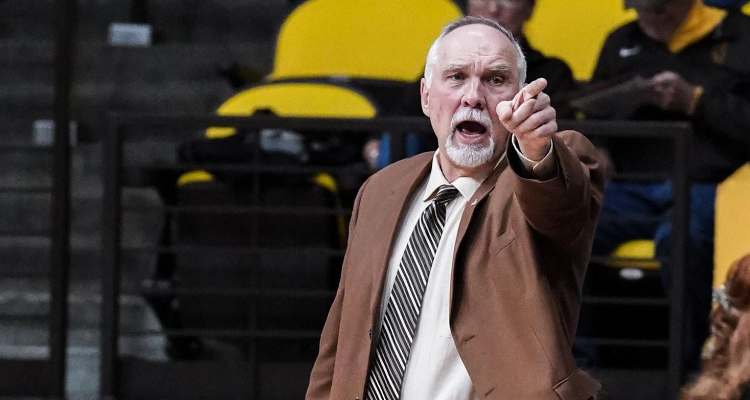 LARAMIE, WY. – Gerald Mattinson has been named the seventh head coach in the history of University of Wyoming Cowgirl basketball. The announcement was made Tuesday by Athletics Director Tom Burman. Mattinson has spent 16 total years on the Cowgirl bench as an assistant coach, including the last 12 years as the associate head coach. Mattinson has agreed to terms of a deal that has an annual base compensation of $220,000, but that number could increase with performance-based incentives.

“This program has a great culture,” Burman said. “We achieve at the highest level academically, we compete for championships and our kids have a great relationship with the staff. In Gerald Mattinson, we have a coach on staff who has been through this process, plus he’s served as a men’s head coach and a school administrator, which coupled with 16 years of Division I women’s basketball provides for a broad base of experience. He has the energy and experience to push this program to a championship.”

Mattinson has been a key figure on the bench during the most successful era of Cowgirl basketball, as Wyoming has a record of 314-186 (.628) with Mattinson on the staff. He has helped coach 21 players to All-Mountain West honors and helped mentor five All-Americans and two MW Players of the Year. He has also been on the staff of 10 teams that have recorded at least 20 wins, including each of the last three seasons. In 2007, Mattinson helped guide the Cowgirls to the first WNIT Championship in program history, and his teams reached postseason play a total of nine times during his 16 seasons.

Off the court, 74 Cowgirls have earned academic All-Mountain West honors during the 16 years Mattinson has been at Wyoming, and 46 have been named Mountain West Scholar-Athletes. Clara Tapia has also earned a pair of Academic All-America honors, and she is the only Cowgirl to have more than one such honor.

“I’d like to thank Tom (Burman) and the administration for this great opportunity for me and my staff,” Mattinson said. “We know the bar of excellence has been set high here by coach Joe (Legerski) and the previous teams, and we look forward to continuing to reach those goals. We’re looking forward to a great season.”

Additionally, Heather Ezell has been promoted to Associate Head Coach, and Fallon Lewis has been elevated to the title of Assistant Coach. Ezell will enter her fourth year with the Cowgirls and her first as an associate head coach. Lewis will begin her first year as an assistant coach following four years working with the team from an operational standpoint after a stellar two-year career in the Brown and Gold.

This past season was a tremendous one for the Cowgirls, as they won 25 games, the second-most in school history, played in their first MW Championship game and reached the quarterfinals of the WNIT for just the second time in program history. Bailee Cotton was named the league’s Defensive Player of the Year and picked up All-Conference and All-Defensive team honors. Marta Gomez led the nation in three-point field goal percentage and was named All-MW. Karla Erjavec was added to the MW All-Freshman team after setting the program’s freshman single-season assist record with 124.

“I’m really excited,” said Cowgirl junior Taylor Rusk. “I’m happy for him, he totally deserves it. I’m excited for this year, I think we have a really good team coming in. It’s new and it’s exciting.”

Mattinson’s professional coaching career began at Weber State as a graduate assistant coach with the men’s basketball program during the 1981-82 season. From 1982-1987, he was the head boy’s basketball coach at Rock Springs High School. He earned Wyoming State Coach of the Year honors and was named Conference Coach of the Year twice. From 1987-90, Mattinson was an assistant men’s coach at Western Wyoming Community College. He was elevated to an Assistant Athletics Director and the Head Men’s Basketball Coach in 1991 and held the position until 1998. For the 1998-99 season, he became an assistant with the women’s program for one year. Mattinson was a business education teacher at Rock Springs High School since 1982 before taking the position of Principal at East Junior High School in June of 2001. He joined former head coach Joe Legerski’s staff here at Wyoming following the 2002-03 season.

Mattinson began his college basketball career as a student-athlete at Casper College for head coach Oscar “Swede” Erickson. While there, he played on a team that went 36-4 with a sixth-place finish at the NJCAA Tournament. Mattinson then moved on to a three-year career at Weber State University in Ogden, Utah, where he played for legendary head coach Neil McCarthy. At Weber State, Mattinson played on teams that competed in two NCAA tournaments. He graduated from Weber State with a bachelor of science degree in business education in 1981. He then completed a master of sports science degree from the United States Sports Academy in 1988 and earned his principal endorsement from the University of Wyoming.

Mattinson, and his wife, Carey are the parents of three children, stepson Morgan Splichal, stepdaughter Tiffany Paradis and son Ashton.