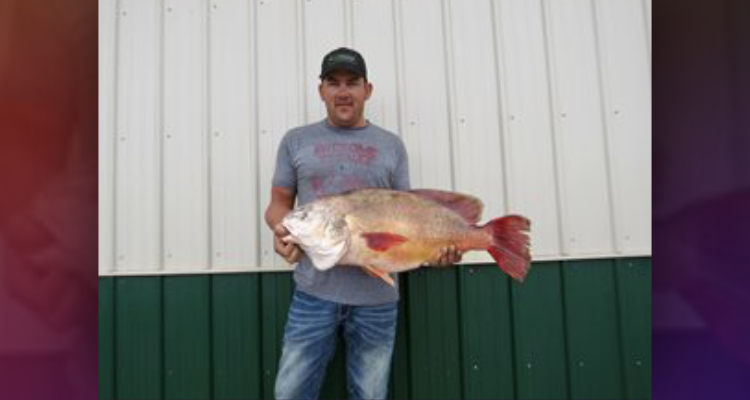 Gillette, WY.    –     For the second time in as many months, a state record-breaking fish has been caught in the Sheridan region. On July 15, 2018, Gillette resident James Potter Jr. caught a 22.58-pound freshwater drum in Keyhole Reservoir, breaking the existing state record by more than four pounds.

Potter and his father in law, Tom McCracken of Las Vegas, had been fishing for pike for only 20 minutes when the fish took Potter’s offering of frozen smelt.

“The fish took the bait and went on about a 60-yard run,” said Potter. “We weren’t sure what we had on the line. We eventually saw a flash of white and thought maybe it was a big walleye. But when it surfaced a bit and got closer to shore we finally saw it was a giant drum. We couldn’t believe it.”

Potter has caught drum before, in the two to three pound range, so knew the large fish was special. He looked up the state record and thought his might top 20 pounds. He soon saw game wardens Luke May and Derek White passing by on a patrol boat and flagged them down. The pair was able to get Potter started with the paperwork and certifying process.

“It was quite the moment when we put it on the scale and it printed out that ticket,” said Potter. “I saw that 22 pounds and said ‘we just beat the record! We just blew it out of the water!’”
The previous freshwater drum record was set in August 2012 by Harley Speed. That fish also came from Keyhole Reservoir and weighed 17 pounds, 4 ounces. Prior to Speed’s catch, the record Wyoming drum was an 11-pound, 12-ounce fish caught in Glendo Reservoir in 1993.

“We don’t have them in a lot of places,” said Sheridan Fisheries Biologist Andrew Nikirk about drum. “They are not native to Wyoming but are an introduced sport fish. Anglers generally don’t target drum. They are usually incidental catches when anglers are ‘bottom bouncing’ for walleye with crawlers.

“They are good eating, but a lot of people don’t know that,” he continued. “The typical size of a drum we see at Keyhole is in the 12 to 18-inch range. And pound for pound they are one of the tougher fighting fishes, no doubt.”

Overall, this is the third species of state record fish caught this year in Wyoming. The other record broken in 2018 is for green sunfish by Chris Castleman at Bryan Stock Trail Pond in Casper.