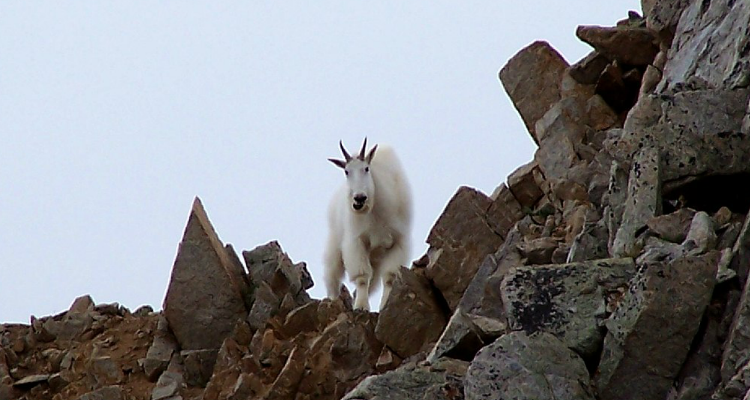 JACKSON, WY. | By MEAD GRUVER, (AP) — Spotting a mountain goat perched high on a cliff might thrill many of the millions of tourists who visit Grand Teton National Park every year, but park officials say it might be time for the agile, bearded animals to go.

The problem, according to the park, is Grand Teton’s 100 or so mountain goats threaten a herd of about 80 bighorn sheep. The bighorn sheep numbered as many as 125 animals just a few years ago.

The thriving goats spread disease and compete with the bighorns for food. Pneumonia, which also can be carried by herds of domestic sheep in the backcountry, is an especially severe threat for bighorn sheep populations in Wyoming and elsewhere.

“We’ve got a management responsibility to maintain the native species, which is the bighorn sheep,” Grand Teton spokeswoman Denise Germann said.

After hearing from the public on the proposal through Jan. 6, park officials expect to decide as soon as mid-February on what to do about the mountain goats, Germann said.

The goats are reproducing rapidly. Now might be the best time to reduce or eliminate the animals before they’re too numerous to bring under control, according to the Park Service.

Wildlife managers should eliminate mountain goats not only in Grand Teton but elsewhere to help struggling bighorn sheep, Ramey said.

“Unfortunately, state wildlife agencies sell nonnative wildlife viewing opportunities to the public,” Ramey said. “This is not a zoo in the wilderness. It should really be for native wildlife.”