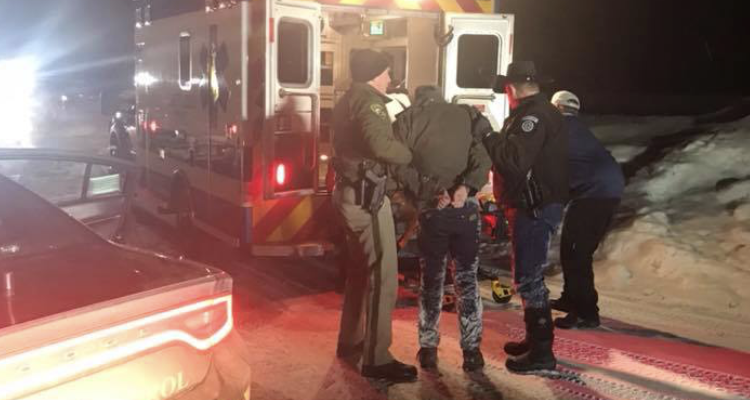 Pinedale, WY .     –    On February 23rd, Sublette County Dispatch was contacted by the Lincoln County Sheriff’s Office in regard to an attempt to locate on a subject out of Idaho. Lincoln County informed us that Bonneville County, Idaho had contacted them about a male subject they were looking for in reference to a warrant. The suspect, 51-year-old Robert Richey from Idaho Falls, had an active warrant out of Bonneville County for sexual assault involving a minor under 16.

Lincoln County Sheriff’s Office was able to ping the suspects cell phone and get GPS coordinates. The cell phone was located near a cell tower in the Bondurant area. Two Sublette County Deputies were notified and responded to Bondurant where the phone was last located. At approximately 10 p.m. a Sublette County Deputy located the described vehicle parked at the Branding Iron Grill in Bondurant. He attempted to make contact with the suspect while other Deputies were responding. The suspect saw the Deputy and sped off initiating a high-speed pursuit. At approximately 10:10 p.m. the suspect crashed his vehicle near the entrance to the Hoback Canyon. He jumped out of the vehicle and ran on foot holding a handgun.

Wyoming Highway Patrol Troopers arrived on scene along with other Sublette County Deputies and immediately set up a perimeter. Sublette County Sheriff’s Office activated the Reverse 9-1-1 alert system in the Bondurant area for residents to shelter in place while the search to find the suspect commenced.

Members of the Sublette County Sheriff’s Office were staging with night vision equipment to aid in locating the fugitive. And trackers were on hand to follow the suspects footprints in the snow. At approximately 1:40am the suspect walked out into the pull out at the mouth of the Hoback Canyon and was taken into custody. The suspect was very cold and had been exposed in the snow and elements for approximately 3 hours. Temperatures in the area at the time were between -12 and -16 degrees Fahrenheit. Sublette County EMS checked out the suspect and transported him to St Johns Medical Center in Jackson from the scene.

The suspect was later discharged from St Johns Medical Center and transported to the Sublette County Jail for booking. Richey will be extradited back to Idaho on the lewd conduct / sexual assult charges. Along with the Warrant from Idaho, he has been charged locally with Fugitive from Justice, Driving under the influence, reckless driving, open container, attempting to elude a Peace Officer, and speeding. Richey is in custody on $100,000 bond.