International study gets at the root of what makes deer migrate 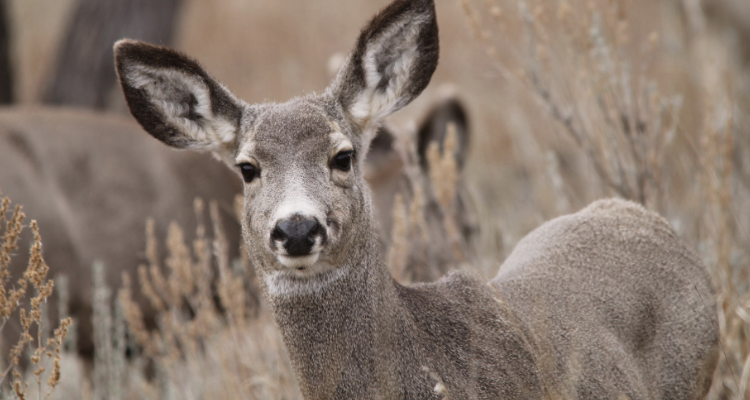 International study gets at the root of what makes deer migrate

LARAMIE, Wyo.  (University of Wyoming)   –   From the Rocky Mountains to the Alps, the question of whether a deer population migrates can be answered by how springtime comes to the landscapes the deer occupy.

That’s the key finding of a first-of-its-kind study produced by a cross-continental team of researchers working with lead author Ellen Aikens, a recent doctoral graduate of the U.S. Geological Survey’s Wyoming Cooperative Fish and Wildlife Research Unit at the University of Wyoming, who is originally from Kintnersville, Pa. The paper was published Monday in Current Biology, a leading journal in the field.

The researchers found that the dynamics of springtime plant growth, specifically whether green-up progresses like a wave or not, explain where migration occurs in many ecosystems. A slow and long spring green-up correlates to a resident strategy.

In contrast, migratory behavior often is found in places where the green-up is shorter in any one place but progresses up in elevation. Migratory behavior emerges as a means for animals to track food in landscapes where pulses of the best forage actually move across the landscape as the spring season unfolds. This wave-like green-up is fleeting, and animals make the most of it by moving sequentially across large landscapes in a behavior that scientists call “green-wave surfing.”

The analysis combined vegetation data from satellites with GPS-tracking data from 1,696 individuals across 61 populations of four ungulate species: roe deer and red deer in Europe, and mule deer and elk in North America.

Few other studies have combined movement and vegetation data at this large of a scale to get at the root of what makes deer migrate. This work was made possible through the collaboration of 36 biologists spread out across North America and Europe. The EuroDeer project contributed some of the most crucial datasets on roe deer and red deer movement.

Intriguingly, researchers found that, at the species level, migrants and residents received equal foraging benefits regardless of which movement strategy they employed. This finding suggests that the movement tactics of deer populations are fine-tuned to the dynamic way that forage resources move across the landscapes they inhabit.

An important implication is that management and conservation of deer species are best tailored to local patterns of plant growth, and the particular behavioral adaptations that have arisen in each area.

For example, roe deer don’t have to move to secure the food they need due to the long springtime season in France or Belgium. However, in the Rocky Mountains or the Alps, to stay put is to be hungry and miss out on the best forage.

“This new research shows that ungulate movement is influenced by altered patterns of forage availability,” Aikens says. “Migrations can be lost when changes in the underlying habitat eliminate the need to migrate over long distances.”

For example, shortened migrations or increased residency have been caused by food subsidies such as agriculture and supplemental feeding. In such altered landscapes, a switch to a resident strategy may be adaptive in a changing world.

On the other hand, in less-developed areas where animals depend on migration to survive, climate-induced changes in the green wave — or new barriers to movement such as highways or housing — can reduce food availability. These changes might be early warning signals of future population declines.

“This research has global implications for the field of animal ecology and should help drive future conservation work,” says Matthew Kauffman, director of the Wyoming Cooperative Fish and Wildlife Research Unit and a senior author of the study. “It allows us to understand more fully the types of landscapes where migration is required by ungulates and where conservation of corridors is thus paramount.”

Other UW co-authors of the paper include Anna Ortega, a Ph.D. candidate with the Wyoming Cooperative Fish and Wildlife Research Unit, from Durango, Colo.; and Kevin Monteith, an associate professor in the Haub School of Environment and Natural Resources.

Aikens’ research was supported by a Graduate Research Opportunities Worldwide award, funded by the National Science Foundation and the Research Council of Norway. Aikens is now affiliated with the Department of Migration, Max Planck Institute of Animal Behavior in Radolfzell, Germany.