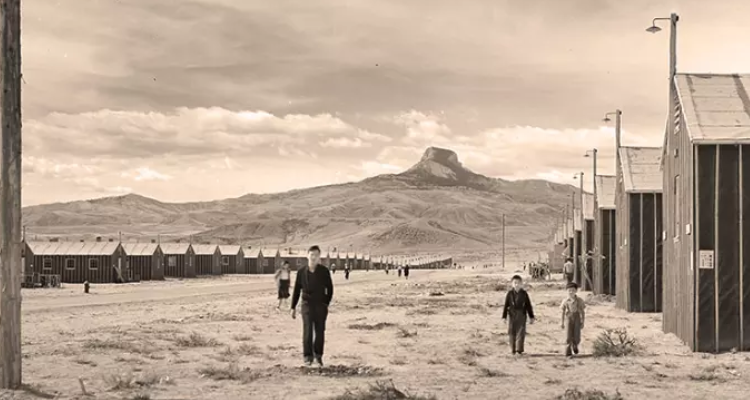 That’s part of why Montana State University-Billings is offering a course dedicated to the Heart Mountain site, an internment camp that held more than 14,000 Japanese-Americans just outside Cody during the war as part of a U.S. government policy that’s often viewed as one of the more shameful periods of American history.

MSUB geography professor Susan Gilbertz spent time in Cody with her mom this summer, and talk turned to the camp.

“She goes ‘oh, is there anything there now?'” Gilbertz said.

The camp was swept from the landscape almost as quickly as it was put up, and Japanese Internment is often overlooked in history books.

The Heart Mountain Interpretive Center, a museum and education site opened in 2011, is also often overlooked in the shadow of Yellowstone National Park and Cody’s popular historical attractions.

It was Gilbertz’s visit with her mom that persuaded her that Heart Mountain’s legacy can be an essential way to understand a landscape of the West. Her mom was struck by a photo in the museum of a woman sitting on the steps of barracks that housed the camp’s internees, with young girls beside her.

“She just kind of stopped dead in her tracks. My mom said, ‘oh, those little girls are the same age I would have been at that time,'” Gilbertz told The Billings Gazette. “Suddenly she connected her life as an 8-year-old girl with the little girls in this photograph.”

For the Heart Mountain Interpretive Center’s executive director Dakota Russell, partnering with education institutions is a fundamental part of the foundation’s mission.

“It’s really exciting to see some light shed on this,” he said. “There’s a whole wealth of scholarship that’s still to be done.”

The group, backed by the Heart Mountain Wyoming Foundation, does no small amount of outreach — it just finished up a grant that offered free field trips for schools and frequently hosts events.

It’s still off the beaten tourist track, but Russell said the camp has seen renewed interest in the current political climate — especially through the lens of immigration.

“(Internment) was something that nobody spoke about for a long time,” he said. “These are questions that we never really resolved, in part because we chose not to deal with this legacy. . I think we’re realizing the folly of that now.”

Gilbertz’s class will include a trip to the museum and site. But the course isn’t just a history class — as a geography professor, Gilbertz said the course will have an emphasis on questions about how place and time interact with cultural identity.

“This is a geography of war. Maybe it wasn’t a battle, but it was certainly something that happened because of war,” she said of Heart Mountain.

The course will examine questions like “where are these geographies of war that are not in the news or not visible to us?”

It will also use a somewhat “experimental” format; students in other disciplines, like environmental science, can earn two credits through the geography course then earn a credit within their major by working with an adviser to write a term paper about Heart Mountain that pertains to that discipline. The class is also open to the public to audit, though there is a trip fee for the museum visit.

“This is a really good thing to do right now — to talk about immigrants to the American society, how important they are, their contributions,” she said. “It’s right here in our backyard. I can use this real place to really force us to think about immigration, not in the abstract.”

The museum, with its restored barracks, memorial, and historical information, provides an indispensable resource for that, she said.

“That place now is marked. It is less likely to become invisible, and it was becoming invisible as a geography of war,” Gilbertz said. “This museum makes it visible again.”