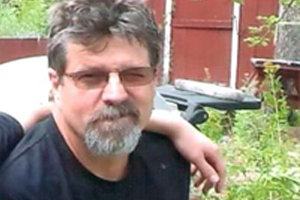 Memorial Services for Jeff Williams, age 55, will be held at 4:00 PM Saturday, October 8th at Church on the Hill, formerly First Christian Church at 301 Delaware Street. Pastor Wayne Wilson will be officiating at the service. The family suggests memorial donations to Helping Hands of Weston County.
Jeff died at home on Friday, September 30th following a lengthy illness.
He was born December 8, 1960 at Billings, Montana the son of Dave and Alice Williams. He attended school Kindergarten through 12th grade in Newcastle and was a graduate of Newcastle High School. He married his high school sweetheart, Michelle Carr, on August 17, 1984. Jeff was a hard worker, and was employed by Black Hills Bentonite from 2002 until the time of his death. Mr. Williams was a hard worker and a friend to many. He enjoyed gardening and making his homemade salsa.
Survivors include his wife Michelle, four sons, Tyler, Ryan, Kyle and Bryce Williams, all of Newcastle; three brothers, Mike, Mark and Travis all of Newcastle; and Sister Jenelle Larsen of Newcastle. Also surviving is a grandson Roman Joe Williams of Gillette, and several nieces and nephews.
Preceding him in death were his parents.