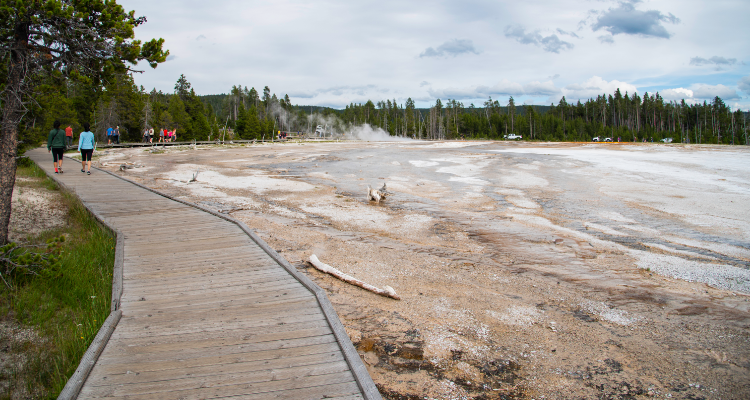 YELLOWSTONE NATIONAL PARK | By MATTHEW BROWN (AP) — A Yellowstone National Park visitor has been hospitalized with severe burns and could face charges after falling into a thermal pool at Old Faithful Geyser, park officials said Monday.

Cade Edmond Siemers, 48, told rangers he was walking near the famous geyser late Sunday night without a flashlight when he tripped into a hot spring, park spokeswoman Morgan Warthin said.

He was able to get back to his hotel to call for help, and Warthin said rangers who interviewed him suspected he’d been drinking alcohol.

Rangers later found Siemers’ shoe, a hat and a beer can near the geyser. They also found footprints going to and from the scene and blood on a nearby boardwalk.

Siemers, a U.S. citizen who had been living in India, was taken by ambulance to West Yellowstone and airlifted to a burn center at the Eastern Idaho Regional Medical Center in Idaho Falls for treatment.

He was in critical condition on Monday and unavailable for comment, hospital spokeswoman Coleen Niemann said.

The temperature of the water at the pool where Siemers was injured measured almost 150 degrees Fahrenheit (66 Celsius) when it was tested in August, Warthin said.

It is illegal to leave the boardwalks around Old Faithful, punishable by up to six months in prison and a $5,000 fine. The results of an investigation into the accident will be forwarded to the U.S. Attorney’s Office for a decision on whether criminal charges will be filed.

So far in 2019, about three dozen people have been cited by rangers for walking away from boardwalks in thermal areas. That’s an increase from the number of citations in 2018, Warthin said.

In 2016, a 23-year-old Oregon man died after falling into a Yellowstone hot spring.

Some Yellowstone thermal areas can reach 199 degrees Fahrenheit (93 Celsius), the boiling point for water at the park’s high elevation.

At least 22 people are known to have died from hot spring-related injuries in and around Yellowstone since 1890, park officials have said. Most of the deaths have been accidents, although at least two people had been trying to swim in a hot spring.

The thin crust that makes up the ground in parts of Yellowstone is formed when minerals underground are dissolved by the high-temperature water, then redeposited on or near the surface.