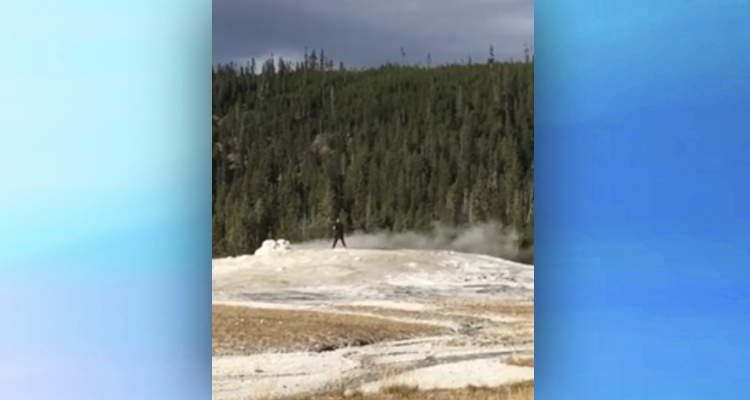 MAMMOTH HOT SPRINGS, WY | By Mead Gruver (AP)      –     Yellowstone National Park officials have ticketed a man caught on video wandering close to Old Faithful geyser, where he risked burns from the boiling-hot water that erupts every hour or so.

The man’s actions between eruptions startled a crowd of a couple hundred people at the park’s most famous attraction. At one point, he lay on the ground near the gurgling hole.

“A bunch of the crowd thought he was going to jump. We didn’t know what was going to happen,” said Ashley Lemanski of Harbor Beach, Michigan, who shot the video Friday.

The man appeared to urinate on the geyser while a park ranger repeatedly yelled at him to get to safety. Rangers caught up with him after he eventually walked back onto nearby boardwalks, Lemanski said.

Rangers cited him with walking off the boardwalks in a thermal area, Yellowstone spokesman Neal Herbert said Monday. Herbert didn’t have the man’s identity.

Just like Yellowstone’s wildlife and majestic scenery, tourists behaving badly have become a target for cameras. A man captured on video harassing a bison in Yellowstone in August was sentenced to over four months in jail for the incident and other drunken behavior in nearby Grand Teton National Park.

If the man at Old Faithful relieved himself on the feature, he wasn’t the first. Two seasonal park workers were fired after being caught on a webcam urinating on the geyser in 2009.