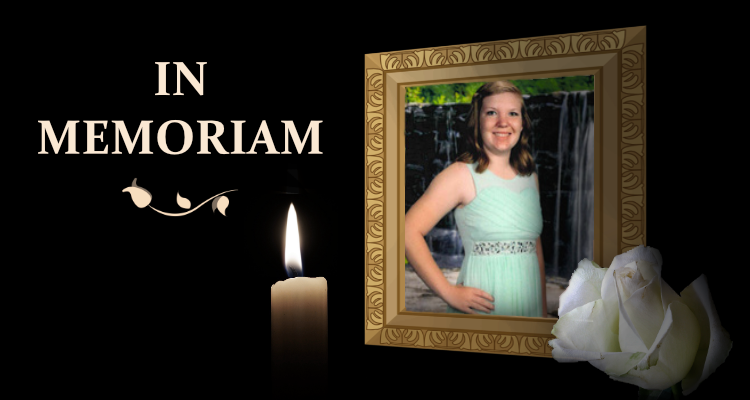 A funeral service will be held at 2:00pm on Saturday, October 19, 2019, in the Boal Auditorium at the Upton Elementary School in Upton, WY.  A private family interment will be held at a later date at the Ritthaler Ranch.

Before she was born on July 6, 2003, the sounds of Shayna’s heartbeat coming through a baby monitor filled the room in the Gillette, Wyoming hospital. That sound caused her family to fall hopelessly in love with her before she was even born. From the hospital she went to live in her grandparents’ home with her mother, Min Dee Ritthaler Lassiter, on the Ritthaler ranch south of Upton, Wyoming. From a very young age she learned to talk on the telephone and spent hours talking to her great-grandpa (Shelly’s father). Often you could find her hiding in a closet or under a table with a telephone to her ear saying “Grandpa great, where am I?” At the other end of the line he would have to guess where she was. She had a special blanket she packed everywhere and every day to preschool at the Children’s’ Center in Upton. The blanket was finally reduced to a zip-lock bag of tattered threads when she moved onto Upton Elementary, then to the Upton Middle school. From there she attended Moorcroft High School. During her school time she played basketball and ran track. She joined FFA, FCCLA and 4-H.

School was never Shayna’s love or passion. At a very young age she learned to drive a 4-wheeler, which made her grandma run out of the house yelling, “slow down Shayna, slow down.” From there, as soon as she could see over the steering wheel, Shayna was driving the ranch pickups. As soon as she could coax a horse to the side of the corral fence so she could climb on, horses became her key passion. Often, she was horseback beside her grandfather working cattle and chasing cows from the steepest ravines and across the sage flats. She was her grandfather’s sidekick riding horses, feeding cows and tinkering in the shop. She could work like any man feeding cows, working in the hayfield and driving great big tractors like they were toys. She was a superb skid-steer operator, and loved all animals.

Late in her young life, she became acquainted with her father, Charles Mundlin-Rindfliesch. They had a wonderful relationship. Shayna also has two sisters, Josalyn, whom she nicknamed JoJo and Pheonix, nicknamed P.J. Shayna was called Sissy by JoJo, and the two of them could spit and fight over any little thing while at the same time sharing a deep sisterly love.

In Heaven, Shayna will join her paternal great-grandparents, Walter and Doris Ritthaler; maternal great-grandparents, John and Alice Kuhn; her great-uncle, Kenneth Ritthaler and great-aunt, Linda Mann. Heaven for Shayna will be finally knowing that she was much loved on this earth. Sadly, she was not capable of knowing or understanding that. She couldn’t believe it. If someone told her they loved her, she was not capable of believing it. At the same time, if she sensed that someone didn’t like or accept her, she was devastated. In Heaven, she will be surrounded by love, and will never ever doubt it. At least she will finally understand and know that while here among us, she was much loved by so many. Shayna left us for a greater place on October 4, 2019, and will lay in blessed peace at the family ranch.

Shayna loved music. She learned to play the guitar and piano, and was rarely seen without buds in her ears and music around her. She knew the lyrics to a thousand songs. The music we enjoy is from her many favorites. One of her most favorite songs is, “All of Me Loves All of You.” Whenever her family was riding in the car and it played on the radio, she would crank up the volume and sing along. She knew all of the words, and everyone else just knew the chorus. So, we’d be speeding down the highway, laughing and singing at the top of our lungs, “All of Me Loves All of You.”