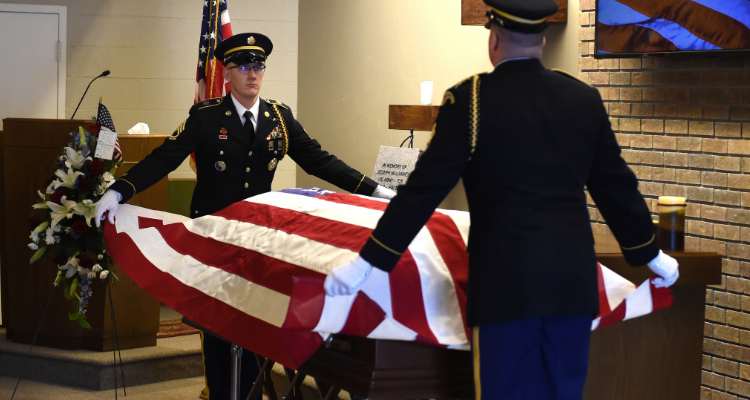 Mulvaney was an Illinois Army National Guard Technician 5 when he deployed to the Pacific Theater during World War II. His story has been an interesting one, and some key players in discovering it were in attendance at the March 29 service including a granddaughter and her family, homicide investigators and a DNA analyst.

The rest of the story, gleaned from various sources, follows.

In 1987 a man named John David Morris, also known as Gabby, left an old military padlocked footlocker in a shed at Newell Sessions’ Thermopolis, Wyoming property. Morris said he would return for it when he settled down.

About five years later and still no sign of Morris, curiosity got to Sessions. He cut through the padlock with a torch and opened the trunk. In it, he found a human skeleton, wrapped in a piece of plastic, a belt and a rotting grocery bag.

“That night I got a call from the head of the crime lab, who told me it was a homicide, as there was a bullet located behind the left eye, and another bullet had grazed on the ribs,” Lumley explained.

The bag inside the trunk was from the Iowa-based grocery chain HyVee, which led authorities to wonder if the remains were of an Iowan. They were, but it took more than 24 years to determine that, and the identity of the victim: Joseph Mulvaney, a World War II veteran and railroad worker, who disappeared from Des Moines in 1963.

Mulvaney’s granddaughter, Shelley Statler of Waukee, Iowa, was a teenager when a story appeared in the Des Moines Register about the bones in Wyoming and the HyVee bag that possibly tied the remains to Iowa. Statler’s father told her the remains could belong to her grandfather.

“I was young and didn’t pay much attention to it,” she told Register reporter Daniel P. Finney, in a recent interview. “As I got older, I became more interested in family history and kept coming back to the story.”

Most state and Hot Springs County detectives didn’t consider Morris a suspect in the murder of the man in the trunk.

Lumley, however, was skeptical and told “Unsolved Mysteries” that he thought Morris knew more about the identity of the bones than he claimed. At the time, none of the investigators knew the bones belonged to Mulvaney, who was Morris’ stepfather.

Lumley contacted Morris in Arlington, Texas. Morris claimed to know nothing about the skeleton and seemed, “very surprised.” He said he had acquired the trunk from a yard sale in either Wyoming, Illinois, Iowa or Oklahoma, and that it may have been in his possession since 1973, but couldn’t be sure. The sheriff was suspicious of Morris when he said that he had never opened the trunk, and believed that Morris knew more than he was letting on, possibly even the identity of the body.

Morris later moved to Mississippi, where he reportedly committed suicide. No charges were ever filed in Mulvaney’s killing.

Statler believes Mulvaney worked for railroad companies, which took him to California, where he met Mary Alyce McLees, an Iowa native.

The couple had three children together, and Mary Alyce had one child from a previous relationship: John David Morris, the man who would one day be in possession of Joseph Mulvaney’s bones.

In the early 1960s, Joseph, Mary Alyce and their three children, ages 6, 7 and 9, moved to Des Moines. In 1963, they bought a house on the northwest side of the capital city. Mary Alyce grew up in Des Moines, but Joseph had no ties there.

Shortly after they signed the paperwork to buy their house, Joseph Mulvaney disappeared. He was never reported as a missing person.

Although the details surrounding the murder have never been confirmed, Statler believes her grandmother Mary Alyce was the one who shot her husband in the head, with some involvement from Morris.

The body was buried on the family’s property, but at some point, the bones were dug up and placed in the footlocker, which was in Morris’ possession when he settled for a time in the Thermopolis area.

“I don’t think my grandparents had a very good marriage, and I know it affected my mom and her siblings growing up,” Statler said. “My grandmother wasn’t always easy to get along with.”

When Mary Alyce died in 2009, she had been out of touch with the family for almost 10 years, Statler said.

It took about two years, but Statler managed to officially claim her grandfather’s remains from a Wyoming evidence locker, and is bringing them
home with her, following the service.

“She should be a detective,” Lumley said of Statler at the Cody service. “She never gave up.” The two said they regret that Morris will never be brought to justice, but are pleased Mulvaney may finally rest in peace.

Jona Vanata, who is part of the Cody military support organization Families on the Frontline, worked with the involved parties and the family “to bring Joseph to rest and honor him for his service in a manner befitting a WWII combat veteran.”

He will also be memorialized with a plaque at the Wyoming Veterans Memorial Park in Cody.

Thanks to the Des Moines Register, Wikia.Com, Northern Wyoming News, and Ballard Funeral Home for providing research materials for this story.