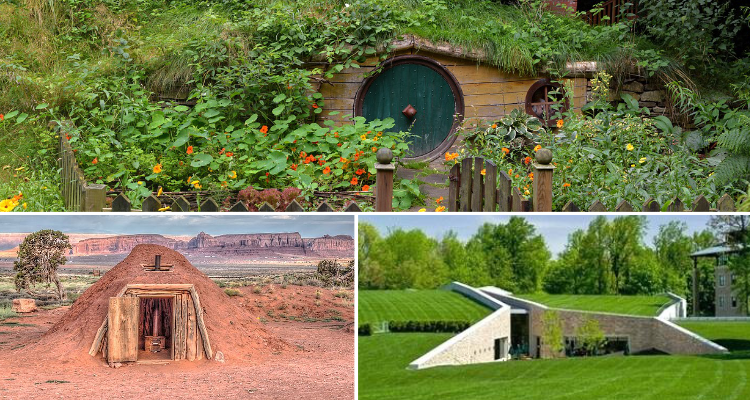 In case you weren’t aware, today (May 15th) is National Underground America Day. According to the founder, the mission of the holiday was to make people aware of that fact the there were people living in North America, the United States and Canada, in underground homes.

Would you believe that somewhere around 6,000 North Americans actually live in the earth. Not just on the earth, like most of us are accustomed to, but in homes buried in the earth. 6,000 people living out their day-to-day lives in some form of underground architecture.

Okay…sure, that is an interesting and maybe even an attention grabbing fact on the surface, but, we want to dig a little deeper.

How common is underground dwelling for the human race? Was it at one time more popular than it is today, and who was the person behind National Underground America Day?

Today’s holiday was created in 1974 by Malcolm Wells, who is considered to be “the father of modern earth-sheltered architecture”. He was a writer, illustrator, draftsman, lecturer, cartoonist, columnist, and a rather accomplished conventional architect. One of his most prestigious claims was being invited to create the RCA pavilion at the 1964 world’s fair. But, Wells was also a man who aspired for something more, a man who woke up one morning with a stunning realization.

“I woke up one day to the fact that the earth’s surface was made for living plants, not industrial plants.” wells said.

His realization turned into a passion and a quest to find a solution.Wells took a look at the conventional architecture he was creating and noted its destructive and transient nature. As a result he took up the challenge of developing a new philosophy of building, one he called “gentle architecture”, a style less conspicuous and harsh within its surrounding landscape. Practicing what he preached, wells designed, built and lived in his own underground home office, in Cherry Hill, New Jersey, he also created many other fully functional subterranean structures.

Wells’ passion for and advocacy of underground living continued until his death.

Was it Common To Live Underground?

So is it common for humans to live underground? Was it once more popular than it seems to be today?

Some of you may have already been aware that humans have been building underground housing, in some form or fashion, for millennia. Earth sheltered construction has been found across many cultures, across all parts of the world, throughout history. Cave dwellings in northern China date back to the second millennia B.C., Berming in the Orkney Islands off northern Scotland, date back around 5,000 years. Here at home, people lived in hill-cliff shelters located at Mesa Verde, in the southwestern U.S., and many Native American tribes utilized some form of earth sheltered structure for a variety of purposes.

Some people in certain localized parts of the world are still living underground today. It can be fairly common in these specific areas where extreme temperatures or population density issues, for example, may drive people underground.

Facing issues with urban sprawl and an increasing demand for sustainable development, Finland’s southern capital of Helsinki, has decided to formulate a strategic plan for an underground city. The goal, to expand into the underground space of the region’s red and black granite bedrock. Helsinki is the first city to develop a dedicated underground management plan for its whole municipal area, and not just for certain parts of the city. Quite a lot of the city’s facilities and infrastructure have already made the move underground, as part of a vast network of more than 400 tunnels and underground structures. Among them are utility, water, metro tunnels, shopping malls, swimming pools, parking and storage facilities, leisure complexes, a hockey rink, and helsinki’s famous Temppeliaukio church. Some of these facilities are already making good use of the natural insulating properties of the rock surrounding them.

In Beijing, China, over a million of the capital cities 21.5 million people are living in basements, old bunkers and fallout shelters left over from the Cold War. The bunkers and shelters are cramped, windowless, basic, and often utilize communal restrooms and kitchens, but they are affordable. This makes these living spaces the first choice in a competitive housing market where 10 square feet of floor space can run over $5000 above ground. Students and ambitious young migrant workers from rural areas, unkindly referred to as the ‘rat tribe’, are the segment of the population that usually find themselves in these shelter homes. Many who live in the underground are embarrassed to admit they live there, and even regularly suffer discrimination due to their living conditions.

In the remote South Australian desert, where temperatures reach over 110 °F in the shade, if there is any, Aussie opal miners in the small town of Coober Pedy have learned to adapt over the last century. The solution they found was to move 80 percent of the town’s population underground. While homes in Coober Pedy have facades facing the surface many lead into underground caverns and cave networks below ground. Half of the town’s hotel is located underground, also beneath the surface, a museum, a church, shops and just about everything else you would need. What’s the trade-off? A constant, and rather pleasant, 75 degree internal temperature year-round.

What Are the Advantages & Disadvantages to Living Underground?

There are advantages to living in an ideal underground dwelling. Some of the advantages might even be very similar to reasons you choose to live in your current above-ground dwelling. Escaping noise pollution, improving home security, a natural resistance some forms of severe weather, creating an unobtrusive presence in the surrounding landscape, and energy efficiency, specifically in terms of consistent interior temperature.

The are also some significant disadvantages, such as: an increased risk of flooding along with moisture problems that require special pump systems, issues with lack of light penetration and natural air flow, due to a lack of windows, air exchange and air quality concerns that require adequate, carefully planned ventilation, a high initial cost of construction, (which can cost up to 20% higher than a conventional housing), and difficulty when attempting to re-sell an earth-sheltered home.